How IRS scandal could help Karl Rove and dark money

Advocates had hoped IRS would clarify its rules on Rove style groups, but now that may be politically impossible 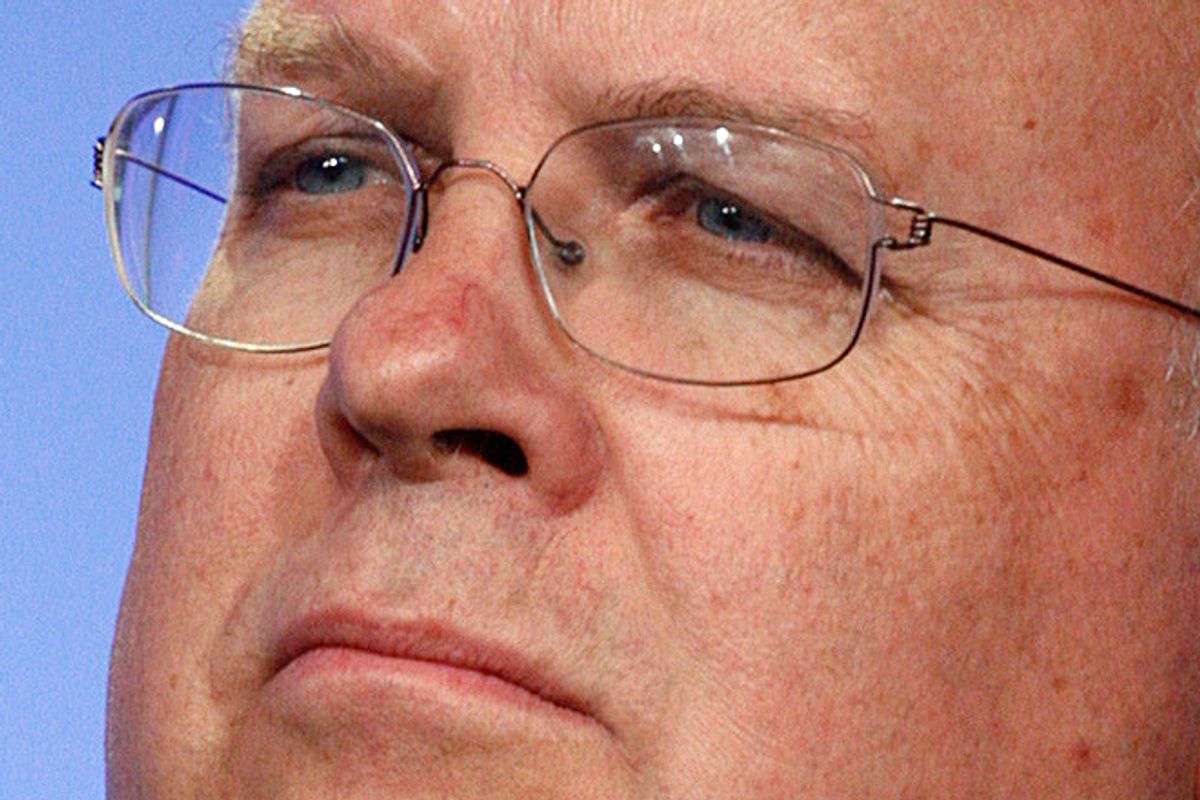 After an election in which hundreds of millions of dollars were funneled through "dark money" nonprofit groups by people like Karl Rove, campaign finance advocates fear the nascent IRS scandal involving these very organizations will make the already difficult task of regulating them nearly impossible.

Organized under section 501(c)4 of the tax code, organizations like Rove's Crossroads GPS are social welfare organizations that are legally barred from making politics their "primary purpose" -- at least in theory. In practice, many of these groups are plainly political, but the IRS has never defined what differentiates an improper political group from a bona fide social welfare group, so they've been able to flout the intent of the law with impunity. With growing public awareness after the 2012 election, campaign finance reform advocates thought they may be able to finally get the IRS or Congress to impose some new rules. But scandal may blow all of that up.

"The IRS is not really in a position right now to rewrite the rules that apply to social welfare organizations. And it's not going to be the right time for that for at least a little while," Lisa Rosenberg, a government affairs lobbyist at the Sunlight Foundation, told Salon. "Everything they do now, at least in the near future, is going to be glossed with this taint of impropriety."

On Friday, the IRS apologized for targeting conservative 501(c)4 nonprofit organizations for extra scrutiny in recent years, prompting outrage from the right and an apology from President Obama himself.

Already, the scandal's impact on campaign finance reform is apparent. This afternoon, Democratic Sen. Carl Levin, who in March vowed "to go after" these groups, delayed indefinitely a hearing planned for June. Outside of the IRS itself, Levin's Permanent Subcommittee on Investigations was the best hope in town for regulating these groups, which enjoy tax-exempt status and don't have to disclose their donors.

"I think it makes it really hard to go after these groups," said Adam Smith, a spokesperson for the Public Campaign, in an email to Salon. "Conservatives will immediately claim bias at anything, even if there is plenty of evidence."

Indeed, House Republicans have already introduced a bill that would "make it a crime for an IRS employee to discriminate against an individual or group" on the basis of their political views, putting a chilling effect on any rules.

“This certainly could make enforcement more difficult," agreed Paul S. Ryan of the Campaign Legal Center. "If this does further discourage the IRS from its already too lax enforcement of federal tax laws, that would be a horrible development.”

In reality, campaign finance experts say, the IRS' impropriety in targeting Tea Party groups is proof positive of the need for new regulations, as the whole problem started because employees charged with weeding out camouflaged political groups from actual social welfare organizations had no official definition to work off of. After Citizens United and attendant decisions eliminated the restrictions on how much money these groups could spend, their numbers doubled, mainly on the right as conservatives saw an opportunity to push unlimited secret money into elections. Some of these groups were blatantly political, even though they told the IRS they'd stay out of politics.

As Ezra Klein explains, with no formal test on what makes a political group, IRS employees went where the action was and focused on Tea Party groups. That approach was wrong and discriminatory, but the only way to fix it will be with better regulations and clearer demarcations of what makes a group political.

Unfortunately, this scandal may make that task all the more difficult. “It’s ironic, that’s the perfect word to describe it," Rosenberg lamented.

Or maybe not? "A silver lining of this could be that this issues now has Congress' attention and perhaps it will be possible to clarify and strengthen (c)4's and other nonprofits getting involved in politics," Ryan said. "Perhaps that may be wishful thinking on my part," he added a moment later.