Seth Meyers pick: Why must late night be so white and male?

Seth Meyers is an affable, funny guy. But why in 2013 are we still looking for any diversity in late night? 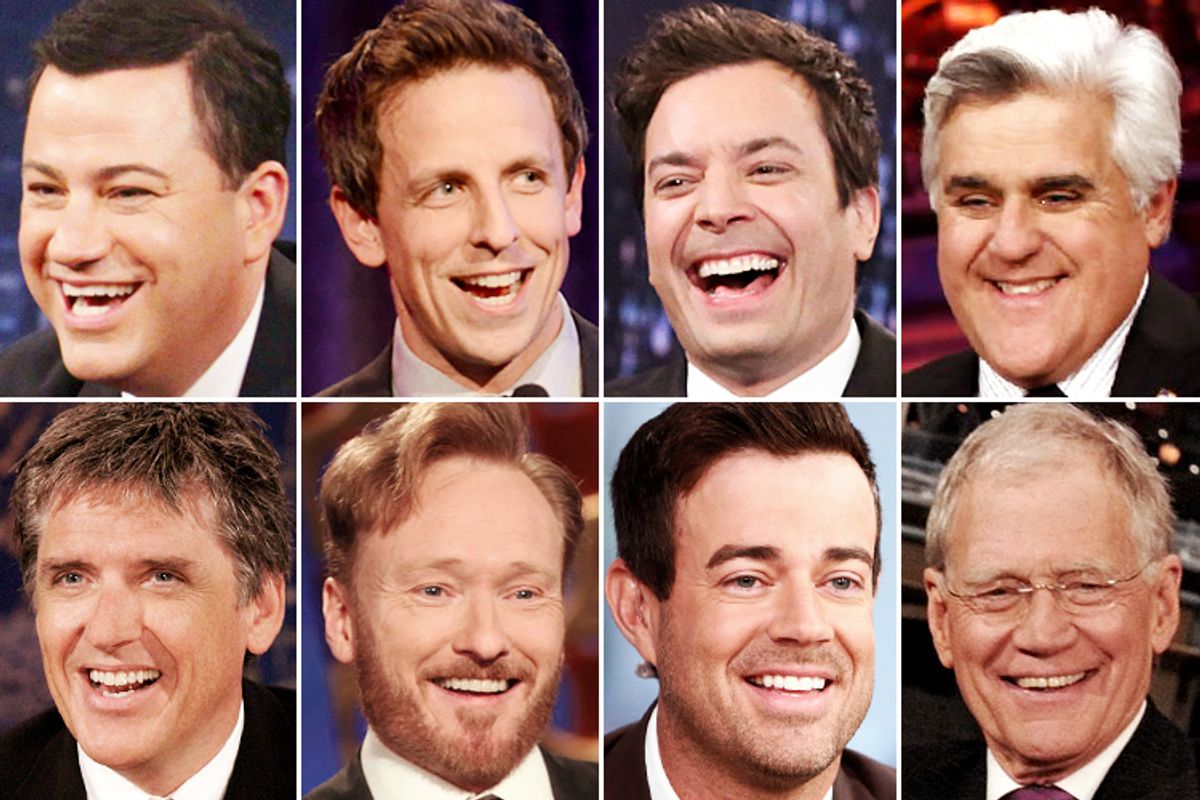 Let's just get this part out of the way first. It's not that Seth Meyers isn't fantastic. He is. He's charming and funny and personable. He's also, like his predecessor Conan O'Brien, a skilled writer whose boyish looks belie his dark, surreal sense of humor. (As "Saturday Night Live's" head writer, he's given the show some of its most memorably quotable moments of the past decade.)

And it's not that we like having these conversations every single goddamn time there's a vacancy anywhere on late-night television, one that is promptly filled by an affable white dude. Believe me, I'd love to write the "Hooray for this bold new era in television" story. But here we are again, America. With the official announcement Sunday that Meyers will be assuming the chair now occupied by Jimmy Fallon as host of "Late Night," our post-11 p.m. hours seem yet again to be largely safe, for the foreseeable future, from having any people of color or ovaries anywhere near them.

Meyers is a pleasant enough choice, as nice enough as when someone puts a slice of cheesecake in front of you at a business dinner. Sure, you think. That'll do. What's ominous about it, however, is what it represents – and the gnawing sense that even as the country gets bigger and broader in its population, the landscape of television is becoming narrower and more predictable. With the glaring, relentlessly trotted-out exception of Chelsea Handler, the midnight hours are remarkably devoid of diversity -- unless you want to count the Scottish host Craig Ferguson as some kind of win for multiculturalism.

No one would suggest that it's a tragedy – or a white male conspiracy – that George Lopez only lasted two years, or that Kathy Griffin's show on Bravo failed to find its footing. And it's not just the late-night talk shows that are suffering from a lack of imagination in the host chair – have you seen the news lately? And behind all that similarity in front of the cameras, guess what you'll find in the writing room? More white dudes.

It's hard to change things. It's getting really depressing for those of us who just love good television to keep hopefully panting at the feet of the networks, year after year after year, begging, "Come on, guys. Have you seen Julie Klausner? Tina Fey could use a new job. Do you know about Aziz Ansari? Are you aware of how fantastic Donald Glover is?" I can't shake the sense that any serious suggestion of an evenly vaguely outside the box host choice for "Late Night" would have been greeted with the same confused, blank faces I got when, during a recent party conversation with a pair of men about casting for "Wonder Woman," I mentioned Zoe Saldana as my dream pick.

Twenty years ago, NBC took a chance on a dorky, ginger-haired former "Simpsons" writer – hardly an affirmative action pick -- and that turned out pretty OK for awhile. Does a host have to be someone with an all but guaranteed if unremarkable built-in audience anyway? Today, as the "Late Night" network NBC finds itself in the ratings crapper, the pressure to simply not fail is tremendous. But in an environment like that, not rocking the boat, even gently, seems a path to epic audience indifference. Better to maintain the status quo, no matter how unchallenging and safe it may be – which is exactly how we wind up with Carson Friggin' Daly as one of the most enduring figures on television.

Somewhere along the way, late night went from being the hour of the day when television could be a little different to a lulling bedtime routine. In the early '90s, Arsenio Hall enjoyed a five-year run as the host of his popular talk show. Thirty years ago, Joan Rivers was the most famed regular guest host on the "Tonight Show." Last month, Rivers told CNN, "It's a very tough thing, and it's tough for women because you don't expect a woman to take control. Still." And though we have an African-American man in the White House, we can't get beyond a bunch of remarkably similar looking Caucasian guys running the night. There's nothing terribly wrong with the choice of Seth Meyers – genial, witty, clean-cut Seth Meyers – as the host of "Late Night." There's just nothing inspired or hopeful or surprising about it either. It is, instead, exactly what late night should never be – one big snooze.