"24" returns to prime time, reigniting a Bush-era debate over torture and terrorism that never really went away 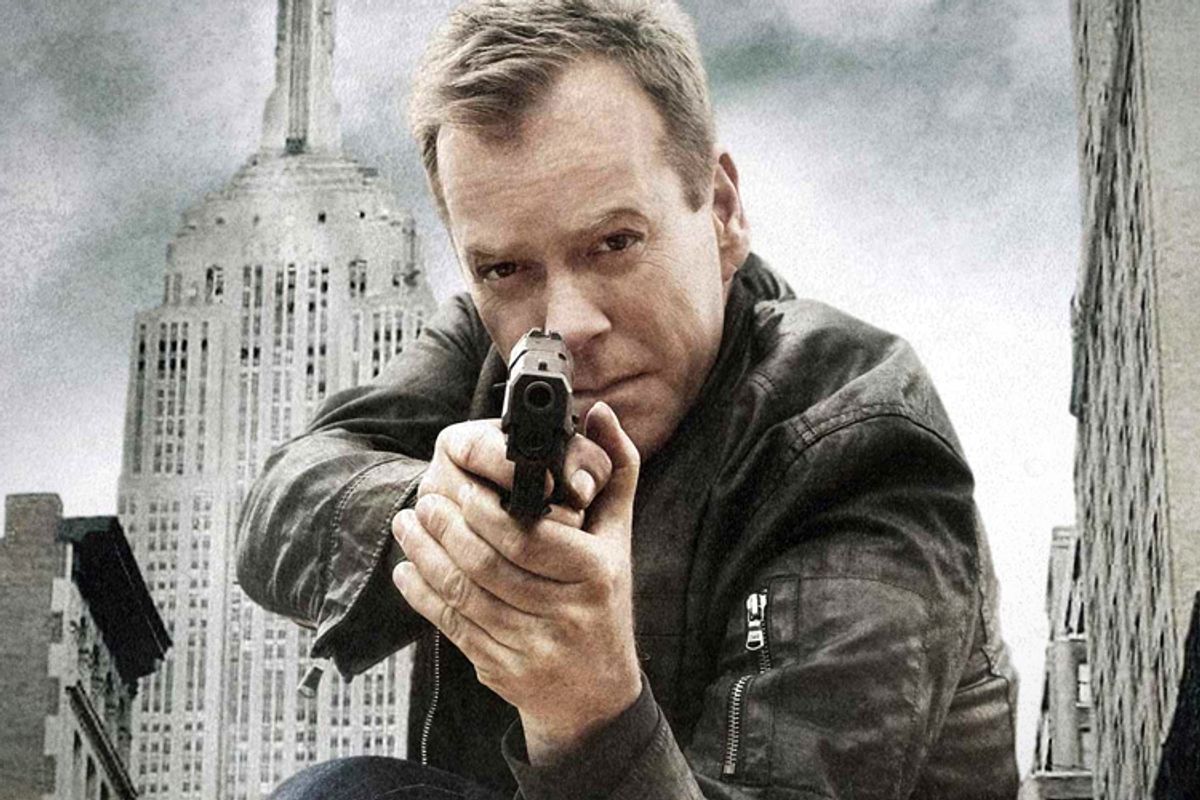 When George W. Bush opened his presidential library earlier this month, in the company of President Obama and the entire former president club, the "war on terror" -- and the wars in Iraq and Afghanistan -- were hardly mentioned at all. Obama and others praised Bush's foreign policy, but they were usually talking about his efforts to end AIDS in Africa.

But as some pointed out, the ongoing drone wars and the hazy acceptance of Bush-era "enhanced interrogation techniques" as legal and morally permissible didn't end when Obama became president.

And after several years of films and TV shows that have wrestled with the complicated legacy of torture -- like "Homeland" and "Zero Dark Thirty" -- the Bush era is about to return to prime time.

Fox is bringing "24" and star Kiefer Sutherland back for another 12 episodes in summer 2014, which raises this question: As the investigation continues into the Boston Marathon bombing, and with Benghazi still a partisan flashpoint, is the culture suddenly thirsting for shows that take revenge?

Sutherland's Jack Bauer spends each season of "24" hunting down the usually Arab terrorists planning to strike in the U.S. But "24" wasn't just famous for Sutherland's performance or thrilling plotlines. Its graphic depiction of torture -- which tended to deliver important information just in the nick of time -- provided an argument in favor of the sort of tactics that the administration at the time had normalized. As the Los Angeles Times put it in 2007, "24" was "among the first and certainly the most prominent to have its main character choke, stab or electrocute -- among other techniques -- information out of villains."

If that era is back, well, perhaps it never really went away. After all, as Georgetown Law professor, and author of the forthcoming "Torture, Law, and Power," David Luban told Salon, the current administration has chosen not to pursue a full-throated repudiation of the previous administration's policies on enhanced interrogation techniques of the sort used on-screen and in life throughout the 2000s. "President Obama said in an interview 10 days before he was inaugurated that he wants to move forward, not backward. And at the same time, there's been an energetic campaign by former administrative officials, which hits on three themes -- it works, it saved American lives, and it's not really torture." And because no one -- at home, at least -- is suggesting that the Dick Cheneys of the world go to prison for war crimes, they are free to write memoirs defending old policies.

America has stopped torture, but it hasn't exactly repudiated it. And with each episode of 2014's "24," or $100 million blockbuster suggesting that enhanced interrogation helped nab Osama bin Laden, or John Yoo or Marc Thiessen media hit, clarity grows more distant. "What [Obama] has not done: He has not provided for any accountability, any truth and reconciliation. That's a problem," said Philippe Sands, a British lawyer and author of books including "Lawless World."

And the lack of aggressive repudiation of the "24" past means that the show is still at least plausible today.

"There are those that champion torture within the government," said Karen J. Greenberg, director of the Center on National Security at Fordham. "Given the refusal of the Obama administration to call them out in any punitive way, they are in the media all the time. They say, 'We needed torture.' Nobody's countering them and nobody's prosecuting them. Public opinion is following them. As long as that drumbeat is out there, Pew polls will follow."

Sands believes that "24" is quite a bit more influential than, say, "Idol." He wrote during the show's run that "24" was popular among American interrogators at Guantánamo Bay prison:

Some described to me how the series contributed directly to an environment encouraging those in the interrogation facility to see themselves as being on the front line, and to go further than they otherwise might have. 24 also made it more difficult for those who objected to the abuse to stop it.

Sands told Salon he was concerned about the potential impact of a revived "24": "Programs have a profound impact. They send messages about what's right and what's wrong. Television programs do matter. They're not academic, arcane debates about various perspectives."

The rebooted "24" is not connected with conservative producer Joel Surnow, who famously told the New Yorker: "There are not a lot of measures short of extreme measures that will get it done [...] America wants the war on terror fought by Jack Bauer. He’s a patriot." In fact, it may well be headed in a softer direction, as it's to be produced by Howard Gordon, the writer who told the New York Times Magazine: "Obviously anyone with any conscience is going to take [charges of abetting acceptance of torture] seriously. But look, we also recognized too that you can’t just hide behind, 'This is just a TV show.' That’s a little like the Twinkie defense. So we actively engaged and reconsidered how we told stories."

Perhaps those stories will take into account changed facts on the ground and tell stories more sensitively. Or perhaps, after leaving the air at the lowest ebb of public opinion of Bush and his cohort, enough time has passed that a story about a hero who's willing to bend civil liberties to protect the nation rings true, and could even speak to our uncertain age in the way that "Homeland" -- a far less triumphalist show about national security in the Obama age -- has done.

As investigative journalist and "Cruel and Unusual: Punishment in America" author Anne-Marie Cusac told Salon: "If it explored where we might be killing the wrong people with these drones, or the implications of what we're doing to supposedly save the country, then we'd have a potentially successful show. It always had that potential."

Then again, if Fox's recent history is any guide, things that were popular 10 years ago may not retain their heat. Said Cusac: "I spoke to some 20-year-olds -- it seemed so old to them! It wasn't part of their cultural heritage."