Angelina Jolie's choice need not be yours

Her decision was brave. But don't forget the healthcare industry is getting rich exploiting breast cancer fears 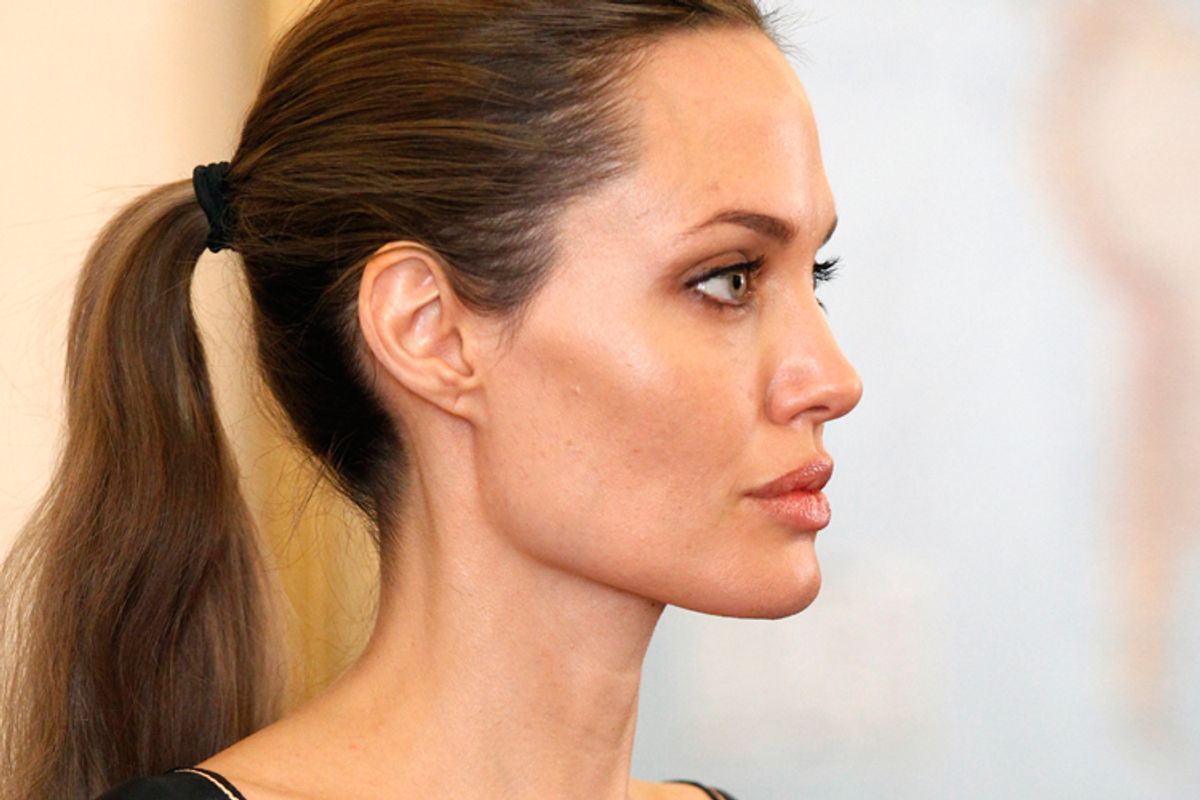 You're an international movie star with one of the most famous bodies in the world. You're also a daughter who lost her mother to cancer when she was only 56. You have six children of your own to raise. And you find out you carry the BRCA1 gene that increases your risk of developing the cancer that killed your mom.

In a bold and candid Op-Ed for the Tuesday New York Times, Angelina Jolie revealed "My Medical Choice" to be a preventive double mastectomy after her doctors "estimated that I had an 87 percent risk of breast cancer and a 50 percent risk of ovarian cancer." As Jolie writes, "Cancer is still a word that strikes fear into people’s hearts, producing a deep sense of powerlessness. But today it is possible to find out through a blood test whether you are highly susceptible to breast and ovarian cancer, and then take action."

The 37-year-old's act has already been hailed as "brave" from everybody from British Foreign Secretary William Hague to a slew of the women in your Facebook feed. And it's undeniable that it takes tremendous strength to make a grueling medical decision and to share it with the world.

But I also hope that in all the headlines and all the applause for Jolie's piece, we continue the conversation about what Peggy Orenstein, who herself faced breast cancer twice, just two weeks ago called our "feel-good war on breast cancer" -- and the tremendous surge in both screening and preventive mastectomies.

"The fear of cancer is legitimate: How we manage that fear, I realized — our responses to it, our emotions around it," Orenstein wrote, "can be manipulated, packaged, marketed and sold, sometimes by the very forces that claim to support us." And writing just this Monday on the rise of diagnoses of women with ductal carcinoma in situ – also known as "Stage Zero" breast cancer – she said, "I hope some day my daughter can look back at what is now done to DCIS patients the way I look back at the Halsted mastectomy – as something excessive and barbaric." As one of her commenters added, "I don’t feel entitled to praise for being especially 'courageous in my survivorhood.' Not next to someone for whom mastectomy was actually urgently indicated."

I don't know what it feels like to have the weight of a potentially devastating cancer diagnosis hanging over my head, or to live with the much-too-early loss of a mother. But I have spent the past few years helplessly watching my friends die of breast cancer. I have seen my best friend spend the past two and a half years going through surgery and chemo and surgery again and chemo again for ovarian cancer. And after experiencing metastatic, Stage 4 melanoma, I have an intimate relationship with gut-twisting statistics and odds. I can swear to you that every one of my friends and I would have done anything, anything to spare our children the loss of their mothers. I have already offered up the top of my head and a portion of my lung in the hope of seeing my kids' high school graduations someday. I get it. For that reason, I commend Jolie and am glad that she can now say she is "very happy" with her own choice and that it was "the right thing to do for our family."

But I also want all of us to be skeptical, questioning and profoundly active participants in our health and our healthcare choices. I want us to remember that all our tests and surgeries also serve an industry that is booming as it sells mammogram machines and bills for surgeries and reconstructions. I want us to be able to see one woman's intimate choice within the context of a culture that is laughably obsessed with breasts while it increasingly views all of us as pink-clad, potential breast cancer "survivors."

And while I admire Jolie tremendously, I question her statement that "Life comes with many challenges. The ones that should not scare us are the ones we can take on and take control of," because I see far too many women out there right now who are indeed very scared, scared by a healthcare industry and its ancillary pink-ribboned bubble of merchandising that is getting rich off their fear. I want us to remember that in life, "control" is often an illusion. But what I desperately want most of all is for all of us to give at least as much attention and resources to the people who are actually living – and dying – with cancer right now, today, as we do to the dark terror of what might -- and then again, might not -- happen someday.