"I feel like we did a great season of television, and that has to mean something" 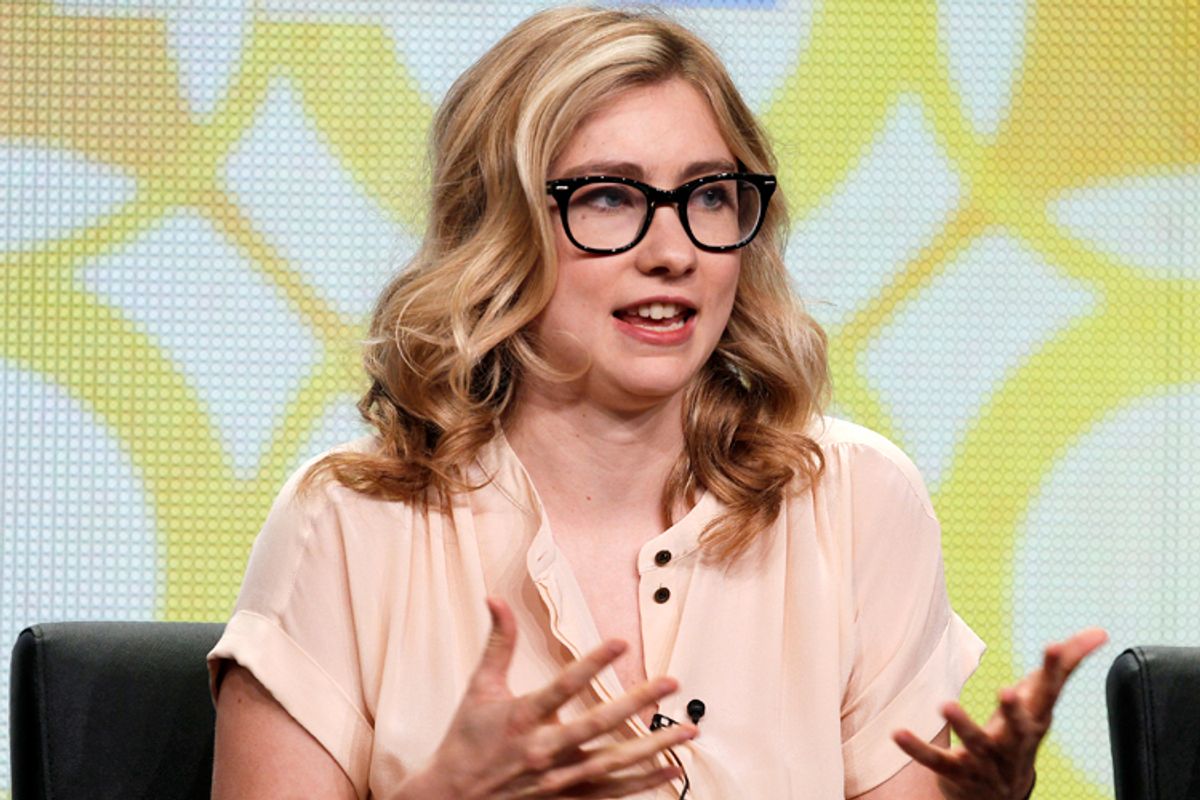 "New Girl" finished its wonderful second season with badger jokes, an interrupted wedding, a Taylor Swift cameo and Nick (Jake Johnson) and Jess (Zooey Deschanel) riding off into the night. Liz Meriwether is the series' bespectacled 31-year-old creator, currently on a month-long break before beginning work on the show's third season. She got on the phone with me to talk about the finale, Nick and Jess's future, "Dawson's Creek," guys liking "New Girl," and her feelings about "adorkable."

Did you and the writers discuss not having Nick and Jess get together at the end of the season?

I don’t feel like they’re completely together at the end of the season. I think they are driving off into the unknown. We definitely wanted to leave it open. I don’t think the end of the season necessarily means that they are now a couple. They are just hopping in the car together. And, yes, we had endless discussions about every element of their relationship. That was our biggest concern in the writer’s room. It still kind of scares me; much in the way they are jumping in the car not knowing what’s going to happen, I am also jumping in the [laughing] figurative car not knowing what’s going to happen. It’s definitely terrifying, as someone who loves these kind of plots in sitcoms. I feels like it’s a great privilege that I get to do one myself, and I really don’t want to mess it up. They are just so great together.

What couples do you love?

I’m of that age where I religiously watched Ross and Rachel. I love “Cheers.” Constantly I’m thinking about “Cheers” and what they did. I like Jim and Pam, in both versions of “The Office.” Joey, Dawson, Pacey, I mean forget about it. Can’t beat that.

Have you seen “Dawson’s Creek” recently?

I refuse to believe that.

Keep hope alive, but it is really unbearable. Pacey is still pretty great.

How hot was Pacey? They really nailed that. That was a big part of what I wanted for the show, was to make sure that it was genuinely hot. That was my goal.

The thing about Pacey is the actor was just so good that the part ended up evolving around him in a nice way.

Jake Johnson always laughs that in the pilot the character description for Nick was “He’s the smartest guy in the room, but he just doesn’t know it.” And Jake is like, “And then you cast me and all of that went away.” I’m like, yeah, that’s definitely true, but we got so many other things, Jake!

I have found, very unscientifically, that guys really like “New Girl.”

I do get that a lot, and get sort of “You’re not going to believe this but …” and I’m like, “I totally believe it! You can be a guy and watch this show and enjoy it, that is totally normal.” I think it’s great. Half our writing staff are guys; the shows has three amazing guy characters. It’s not surprising. Just because it has the word "girl" in it, it has forever been branded as a girl show. I never thought of the show that way; I always thought of it as an ensemble comedy. I don’t believe in guy comedy and girl comedy, I think things are funny or they aren’t. I do wish more guys felt like they could watch it. There’s marketing and everything else, and for one reason or another, there was a sense that it was not a show for them, and I think it is.

In retrospect do you feel like the title and "Adorkable" framed the show as something other than what it was?

How did Taylor Swift’s appearance come about?

I had this idea in the shower. I thought it would be funny, if instead of Schmidt having a “Graduate”-style moment at the wedding, if it was Shivrang’s ex-girlfriend. And I thought it would be funny if it was somebody that you recognized. So we were just thinking of people that we could ask to do it, and our casting director said that Taylor Swift was a “New Girl” fan, and it was one of these amazing moments, of “yes of course, that would be great.”

So her character being named Elaine is a "Graduate" joke?

Are you in a wind tunnel right now?

Sorry, I have the quietest voice! And also I have repeatedly gotten pulled over for talking on my phone in my car. I was trying to be safe or something.

And I have dishes in my back seat that are like rattling around. Anyway, basically Taylor’s a fan of the show and was interested and we were very happy to have her.

Do you feel like you are finally figuring out Winston? He seemed better as the season went on.

I feel like we’re on a mission to figure out that character. We have a show with five amazing actors, and the good thing is that we’re not close to done exploring these characters. I think the thing we found with Winston this season is he’s so funny in these kind of crazy, comedic runners, small pieces of the episode. And obviously we want to find ways of building him more into the episodes and the stories. We’ve heard that overwhelming response from everybody, and we’re trying to figure it out. And I think that’s definitely something we’re thinking about going into season 3. I think the Nick-Jess relationship, obviously, kind of took over the season. A lot of things took a backseat to that.

Do you think Nick and Jess will be less the focus, even if they are or are not together next year?

I really don’t know. The way that I work, I enter into a hole for the season. I’m just living and breathing the show, and then when we stop work I kind of have to take the month off and not think about anything. So I haven’t thought at all about season 3. I know that we were really happy with where we ended up with Nick and Jess this season, and it helped us focus the show, and we learned stuff about the characters and about what we do well as a show. I think the show works best when you’re feeling the ensemble and connected and invested in everybody’s stories. Obviously, we have to come up with new interesting stories for everybody next season. But I’m not going to think about that for at least another three weeks.

Do you feel like you have a better sense of what works for the show now than you used to?

Definitely. I’d never written on a show before. This is my second season of television in my life. You can see over the course of the season, we started off, not rudderless, but trying a bunch of different things, throwing a bunch of things against the wall. I think “Neighbors” and “Models” and “Bathtub" are episodes that were without an emotional center, and as soon as we latched onto this Nick and Jess relationship we found that the show can be about relationships and still be really funny, and have this extra weight and emotional importance that I think ultimately helps the comedy a lot. I love writing relationships, and I started this season not focusing on that this much. And I think I’m a better writer when I’m writing about characters in relationships, rather than big comedic ideas that just exist for comedy’s sake.

It’s possible that you could have two major couples, Nick and Jess and Cece and Schmidt, with four of your five characters next year.

I don’t think we’re going to do that. Unless we can find two completely different ways that they are in relationships. Maybe we can, I don’t know, but I don’t think that’s where we’re headed. I love when they’re single and out and meeting people. But like I said, I really have no idea what we’re doing next year. So that said with the caveat, anything could happen

How much do you pay attention to feedback?

I don’t, actually. I actively try to limit my exposure to the Internet kind of feedback, if that’s the word. I’m very sensitive. I can just latch onto the most negative thing and spend the whole day thinking about it. I’m just that kind of person. I’m trying not to be, but that’s who I am; I just know that about myself and can’t really engage with it. But my showrunners, Dave [Finkel] and Brett [Baer], don’t have that problem. So they do read all the comments and they do read all the reviews, and they stay on top of it and then they filter it out for me. They tell me what is worth hearing, or is worth talking about. That's part of making a TV show. You’re just constantly getting feedback and people are really emotionally invested in the characters — if you’re lucky they are. And we try and listen for what seems smart, or what maybe echoes what’s in our own minds. Some of it you read and think, “That makes complete sense and I wish I thought of that three months ago when I was making that episode.” Some of that, you can't help. It’s a hard job. You make 25 episodes and not every episode turns out how you want it to turn out.

Do you feel like more of a boss now?

I am still figuring it out. I was just having drinks with a friend who works in consulting, and she went to business school and she was talking about some of the things she learned in business school. And it is crazy that as a writer you are then promoted to running this huge thing without any training, or any kind of management skills. It’s not the best business model. Obviously you learn as you’re doing it. I feel like you would really have to ask the people I work with about how I’m doing.

I definitely like parts of it. Being a screenwriter or playwright is a very solitary existence. You’re alone a lot, facing the blank page and the day and you’re left to your own deices. And TV is the opposite of that. There are people at every turn. And when it’s working, you have this amazing sense of community and team spirit. It feels like studying for finals all year long. It’s that crazy, everyone is running around in their pajamas and trying to think up really lowbrows jokes. The parts that I’m always working on are how to communicate and communicate what’s going on in my head. And figuring out what people are best at, and encouraging them to do that, and keep everyone feeling empowered. And not using the word “like” every time you open your mouth.

Do you pay attention to ratings?

The truth is we’re doing really well for single-camera sitcoms right now. I do care about it, definitely, but it’s really hard to know what you can control and can’t control. I feel proud of the show this year. I feel like we did a great season of television, and that has to mean something.