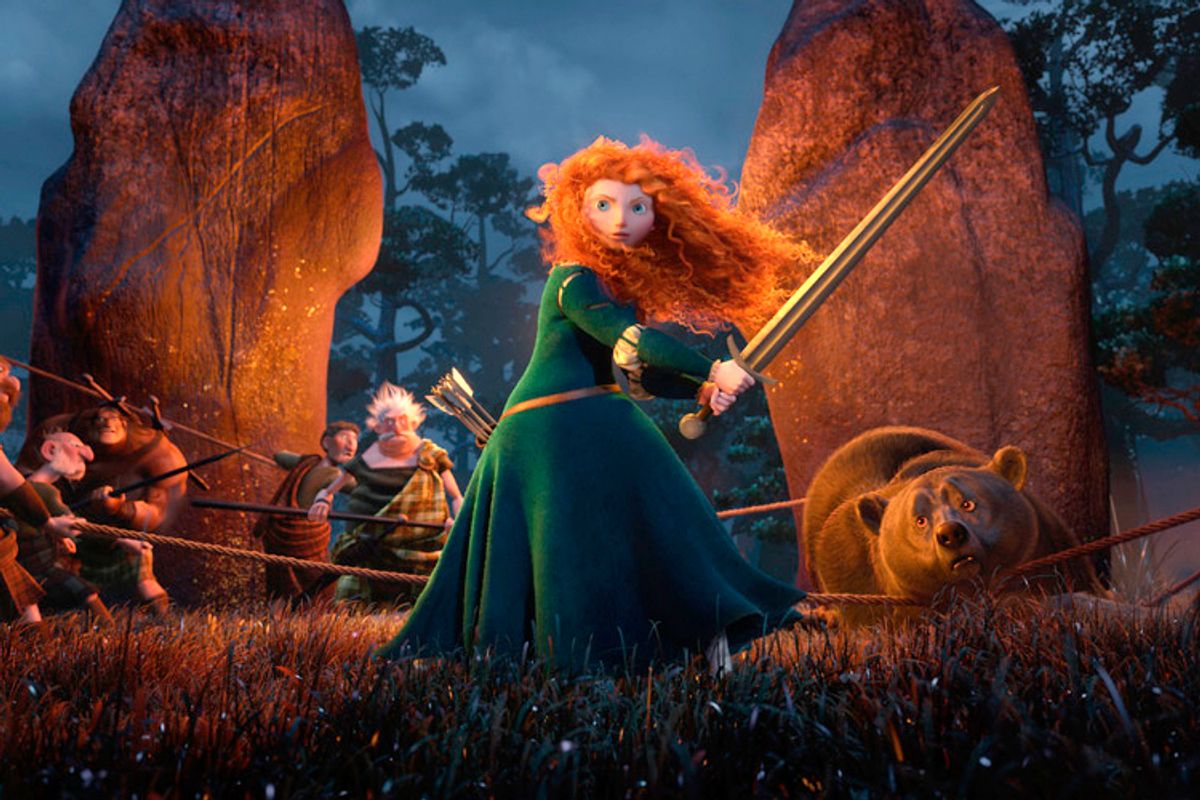 If there's one thing you can count on Disney for, it's creating strong leading female characters in its movies – and then reducing them to wide-eyed idiots in their merchandising. The Belle who obsessed on books and the Tiana who scrimped and saved for her own restaurant, the warrior Mulan and the wise Pocahontas – they've all been reduced to flowing hair and off-the-shoulder dresses and coy looks in their post-cinematic incarnations. But when the mouse tried to give its "Brave" heroine Merida a "Stepford Wives" makeover, it finally went too far.

Last week, Disney announced that it was adding the headstrong, flame-haired heroine to its "Princess" collection. But it was the revamped image of Merida -- her waist nipped, her eyes elongated, her messy tangle of hair a sexy tumble, her plain dress a shimmer of bling and her trademark bow and arrow nowhere to be seen – that set parents' jaws dropping. Disney blandly told Yahoo Shine that "Merida exemplifies what it means to be a Disney Princess through being brave, passionate, and confident and she remains the same strong and determined Merida from the movie whose inner qualities have inspired moms and daughters around the world." But it didn't quell the disgust.

Fans quickly launched a Change.org petition against the "skinnier, sexier and more mature in appearance" Merida, asking Disney to "Keep Our Hero Brave!" And in an email to the Marin Independent Journal, "Brave's" Oscar-winning co-writer and co-director  Brenda Chapman -- who originally envisioned Merida as "a different kind of princess," said, "There is an irresponsibility to this decision that is appalling for women and young girls. Disney marketing and the powers that be that allow them to do such things should be ashamed of themselves ... I think it's atrocious what they have done to Merida. When little girls say they like it because it's more sparkly, that's all fine and good but, subconsciously, they are soaking in the sexy 'come hither' look and the skinny aspect of the new version. It's horrible! Merida was created to break that mold — to give young girls a better, stronger role model, a more attainable role model, something of substance, not just a pretty face that waits around for romance."

And so, while not acknowledging anything weird about its clumsy attempt at restyling, Disney quietly put the original messy, freckly, slightly overbitey, "strong, fearless, adventurous" Merida on its Princess page. She's definitely the "one of these things that's not like the others" among her sultry cohorts, but it's a difference that's beautiful. Of all the princesses, Merida is now the one who most looks like a normal teenage girl, with an open smile and a gaze that's bright and direct – a far cry from the creepily "Hello sailor" action the other ladies are working.

But this isn't quite a victory for substance over sexualization. Think Disney's going to stop rolling out the Merida merchandise, including the shiny, glossy action figure, now? Doubtful. More than the Merida issue, though, there's the whole bizarre, absurdly lucrative, damn near inescapable Princess Industrial Complex itself.

I have two daughters who have spent many happy years playing dress-up and skipping off to school in tutus. I am a girly girl myself; a woman who owns her own tiara, and who recently had lunch with someone who said, "You know, I don't think I've ever seen you in pants." But there's something deeply disturbing and wrongheaded about the Disney princessization of American girlhood. The princesses, in their merchandise state, aren't heroines. They're just strange, sparkly happy endings. Not to be a buzzkill, but you do know that Belle, in her poufy yellow dress, is a prisoner, right? And that the pink-clad Ariel lining the toy aisle has recently sacrificed her power of speech? I'm just saying, context.

And if the chipper image of these pretty, happy princesses is a little out of whack, even odder is the more recent deluge of baby and toddler merch, known, freakily enough, as "My First Disney Princess" toys. Yep, skilled, smart characters are being shrunk down to helpless infants. Now baby Cinderella is getting married. And Baby Ariel has legs. Legs. I don't even understand that. Your inconsistency is vexing, baby princesses!

The message – one that is now rammed down our daughters' throats from birth, literally -- is not one of effort or even action. Princesses don't become princesses; they simply are princesses, even as babies. That Disney has left Merida relatively alone in one small corner of its brand doesn’t change that. There's no narrative, no adventure, in the Disney princess world --  just the simpering image of pretty girls with crowns on their heads. I just hope that no matter what Disney tries to pull, we as parents and consumers don't forget the stories behind those princesses. Because in the movie, when they try to cram Merida into that lovely blue gown that her doll counterpart now smilingly sports, she grouses, "Curse this dress." And she stretches herself right out of it.