Imagine getting raped and having no one to report it to but your boss. It's a fight -- but change may be on the way 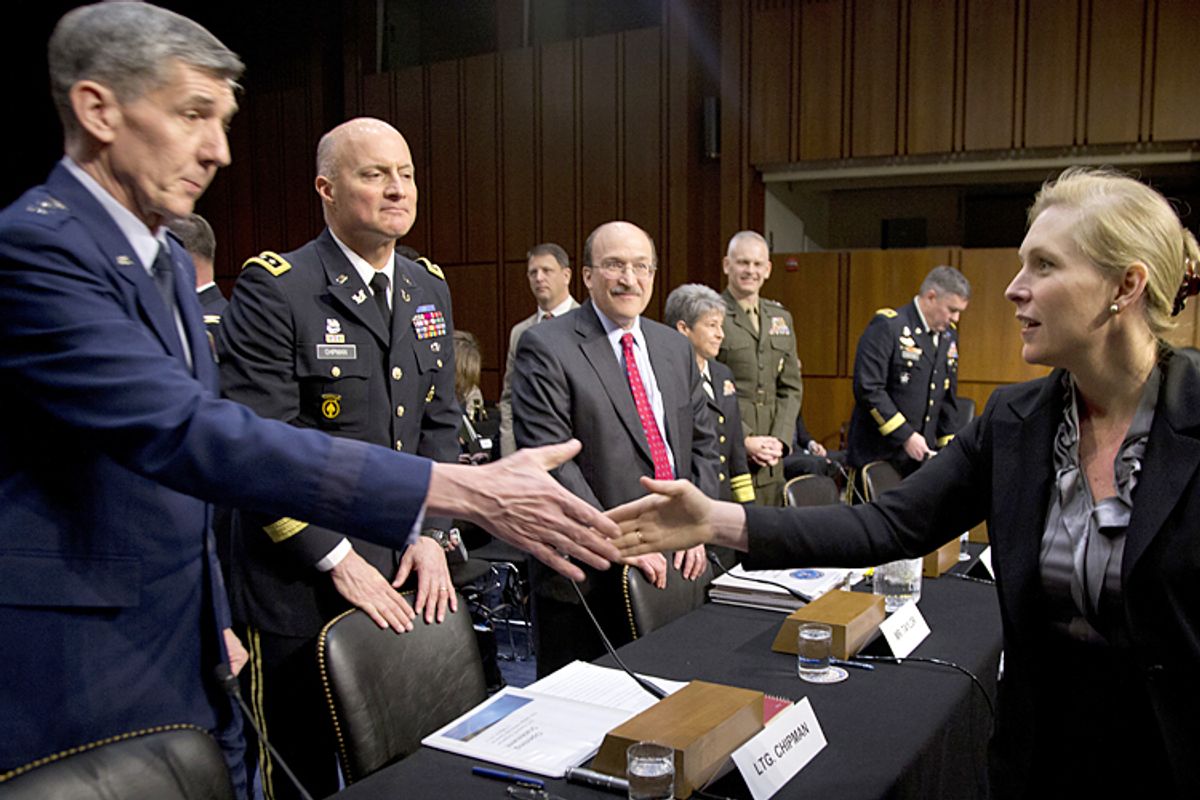 It’s an idea that the military has long opposed: Taking the response to sexual assault charges out of its chain of command and handing it to an independent judicial authority instead. In other words, no longer forcing people to report sexual violence to their often-indifferent or uninformed boss -- and maybe the perpetrator's too.

Last week, that opposition went right to the top, when Secretary of Defense Chuck Hagel said, “It is my strong belief — and I think others on Capitol Hill and within our institution — the ultimate authority has to remain within the command structure.” He was saying that, of course, while unveiling an annual report showing the number of sexual assaults within the Army had actually gone up in the past year. But on Monday the Pentagon press secretary backed away somewhat, saying the secretary was “open to all options.”

If something finally changes, it will be because the chorus demanding the military confront its sexual assault epidemic has gotten louder than ever before. To clarify, Hagel was speaking after Lt. Col. Jeffrey Krusinski, who headed the Air Force's Sexual Assault Prevention and Response, was charged with sexual battery, but before an equal opportunity adviser and coordinator of a sexual harassment-assault prevention program was charged with pandering, abusive sexual contact, assault and maltreatment of subordinates. If you're having trouble keeping track of the military sexual assault scandals, well, there are also the two separate cases recently in which the chain of command overruled guilty verdicts in sexual assault cases.

Anyone looking to make the point that the system is woefully broken -- as advocates long have -- could have their pick of disturbing incidents to make the case. And those advocates have better organizing infrastructure, storytelling (including an Oscar-nominated documentary) and allies in Congress than ever before.

And those allies aren't exactly holding back. “Is Congress really going to stand by and let the military handle this?” asked Rep. Jackie Speier on Wednesday. “Congress has been an enabler of sexual assault by not demanding that these cases be taken out of the chain of command.” On Thursday, Sen. Kirsten Gillibrand will introduce legislation to take sexual violence (and all felony cases) out of the chain of command. It follows similar legislation introduced by Speier in the House that specifically focuses on sexual violence cases.

"The women on the Senate Armed Services Committee, including some of the Republican women, have really been up in arms on this,” said Anu Bhagwati, executive director of the Service Women’s Action Network (SWAN). “They have taken every opportunity to bring it up when there is a hearing, regardless what the meeting is about. Many of them have been attorneys, some of them have prosecuted sex crimes in the civilian world, so they know what to compare it to."

There wasn't always a friendly ear to the issue on the Hill. “Historically, the White House and Congress have given far too much deference to the military,” Bhagwati said. “The pressure on them now is so vast that they can't afford to just say, let the military handle it.” Without the support of military brass, it's an uphill battle, but Senate Majority Leader Harry Reid told reporters Wednesday, “I haven’t read it, but I’d be happy to look at that very favorably.”

On Monday, the Oscar-nominated film on military sexual assault, "The Invisible War," aired on PBS, which was long scheduled but fortuitously timed. The film has been key in raising awareness in Congress. Amy Ziering, one of the two filmmakers behind it, said they had held two screenings on Capitol Hill and shared the film with members of Congress individually, and Air Force chief of staff Mark A. Welsh showed it to a meeting of wing commanders. (Unfortunately, the lesson went only so far -- Welsh recently blamed the epidemic of sexual assault in the military partly on “hookup culture.")

“The film was mentioned seven or eight times separately during the Senate Armed Service Committee hearings,” said Ziering. “I think that's fairly unprecedented in a congressional hearing.” She said she could tell which members of Congress had seen the film or not based on their questions.

The film’s individual testimonies may also have helped mainstream the idea of taking the cases out of the chain of command. “Prior to making our film, when we would try to gingerly suggest adjudication outside the chain of command, either an independent civilian body or independent military body, that was thought of as absolutely blasphemous,” Ziering said.

Last month, SWAN brought around 250 service members to Washington for a summit on military sexual violence, and managed to get them about 75 in-person meetings with members of Congress. Bhagwati pointed out that the recent events led the president to comment on the issue for the first time in five years. “The bottom line is: I have no tolerance for this,” President Obama said last week, adding,  “I don’t just want more speeches or awareness programs or training but ultimately folks look the other way.”

The fact that two men whose job it is to prevent sexual assault had allegedly committed it did not surprise advocates. “Why would we assume those two men are any different from their peers?” said Bhagwati. “They come with the same culture of victim blaming, rape culture, and confusing messages about masculinity and femininity. There are very few meaningful conversations happening in these required training discussions.” She added, “It goes to show that within the military that your rank endows you with some sort of moral leadership is completely false. And that's really how the system works on the inside."

Nancy Parrish, president of Protect Our Defenders, said that some cases are already tried in civilian criminal courts if a service member reports to the police instead of the military chain of command, “and the sky doesn’t fall.” She added, “It's ultimately up to the military leadership, if they decide this is a moment they want to seize to fix this. Or whether they will still treat it as a public relations problem.”

This week, female senators like Gillibrand and Claire McCaskill are making the rounds to pitch the legislation -- but so are a handful of male members of Congress. "When women are in leadership positions, when they take the lead on framing social justice consciousness," said Bhagwati, "they also allow some of the men who have been a little more silent to step into bigger and better leadership roles on things they should have been speaking about.”