Jonathan Karl said he "obtained" controversial emails. He didn't, his leaks had errors and ABC hasn't fixed it yet 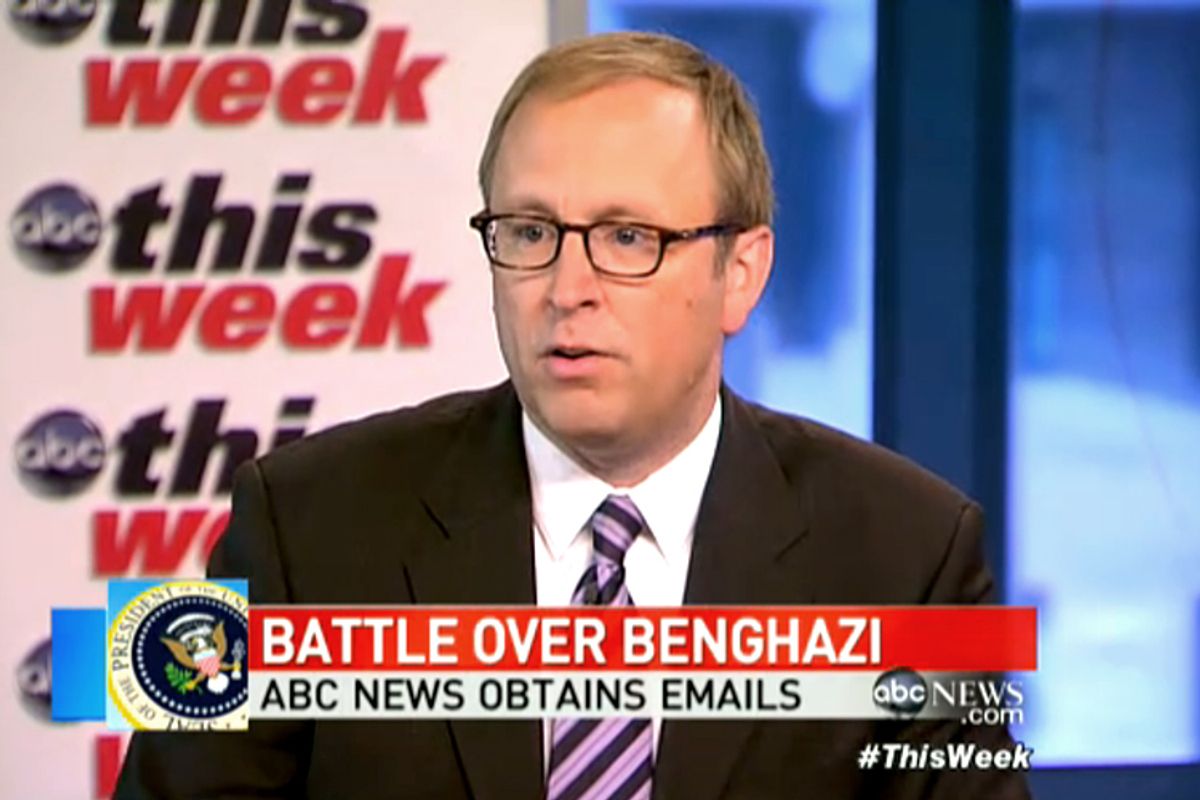 What did they know and when they did they know it? That question has been posed to the White House a lot this week -- but it should also be put to ABC News, which has been caught reporting as fact emails about the Benghazi controversy that, it turns out, were doctored by Republican aides. There's no indication that ABC and its reporter, Jonathan Karl, knew the emails were manipulated before reporting them, of course. But the network may run into trouble for overplaying its hand in claiming it had "obtained" emails that, we learn today from CBS News, were actually notes taken by GOP aides being briefed on the emails.

That might be less of a problem if the characterization of the emails was accurate. It was not.

Here's a timeline of ABC's role in the matter:

Friday, May 10 - Morning: Karl's explosive report that ABC had obtained 12 different versions of the administration's talking points on the Benghazi attack quickly made the controversy the top news item of the day as every other news organization rushed to aggregate and digest his report (including Salon).

Friday, May 10 - Afternoon: As Karl's report ricocheted across Washington, Republicans seized on it, and the White House launched a counter-offensive, hosting a series of deep background calls with reporters to try to put out the fire. The importance of the report can't be overstated. As Jonathan Chait wrote, "Karl’s report produced among mainstream and liberal reporters a sense of embarrassment at having dismissed the story as a weird partisan obsession." The New Yorker's Alex Koppelman wrote that after dismissing the Benghazi controversy for some time, "now there is something to it.”

Sunday, May 12: The damaging narrative is cemented on the Sunday Morning talk shows, where the Benghazi emails get top billing.

Tuesday, May 14: The story begins to crumble after CNN's Jake Tapper -- ironically a former ABC reporter until recently -- obtains one of the full emails in question, which shows that the version Karl reported contradicts the original. "Was ABC News used by someone with an ax to grind against the State Department? It looks possible," Joan Walsh wrote. She would later be proved correct.

Karl responds, but instead of correcting the record and apologizing, he doubles down and says he was "quoting verbatim a source who reviewed the original documents and shared detailed notes."

Wednesday, May 15: After stonewalling, the White House, releases over 100 pages of emails relating to the Benghazi attack, proving the email, as Karl originally reported it, was incorrect. ABC reported that White House national security adviser Ben Rhodes seemed to intervene on behalf of the State Department in a turf battle with the CIA, but the original emails revealed he did not mention the State Department at all.

Thursday, May 16: CBS' Major Garrett confirms speculation that it was Republican congressional aides who edited the emails by fabricating the bit about the State Department and other pieces. As Salon reported last week, some lawmakers and aides saw the emails in March and said nothing. But, as Kevin Drum speculates this morning, "riding high after last week's Benghazi hearings, someone got the bright idea of leaking two isolated tidbits and mischaracterizing them in an effort to make the State Department look bad."

Karl is a good reporter and it seems highly unlikely that he would have reported information he knew to be false, but ABC clearly got a bit ahead of itself when Karl and other correspondents repeatedly claimed they had obtained the emails when they really only saw notes taken by congressional aides in briefings. The Republican aides must have assumed the White House would never call their bluff by releasing the emails.

Karl, who has been criticized in the past for "overly credulous coverage of Republicans," as Chait notes, has not apologized or formally corrected his error.

UPDATE: A source points out that CBS News also got duped by the doctored emails when the network reported on them Friday night. Based on her own reporting, Sharyl Attkisson, who has been spearheading CBS's coverage on Benghazi, published even more emails than ABC did, though her report seems to have garnered less attention than Karl's because it came out almost 12 hours later, just before the weekend. One of the edited emails that that fellow CBS News corespondent Major Garret corrects was reported only by Attkisson and not Karl. Indeed, the information Garret cites as coming from Republican staffers appears to be what they provided to Attkisson.