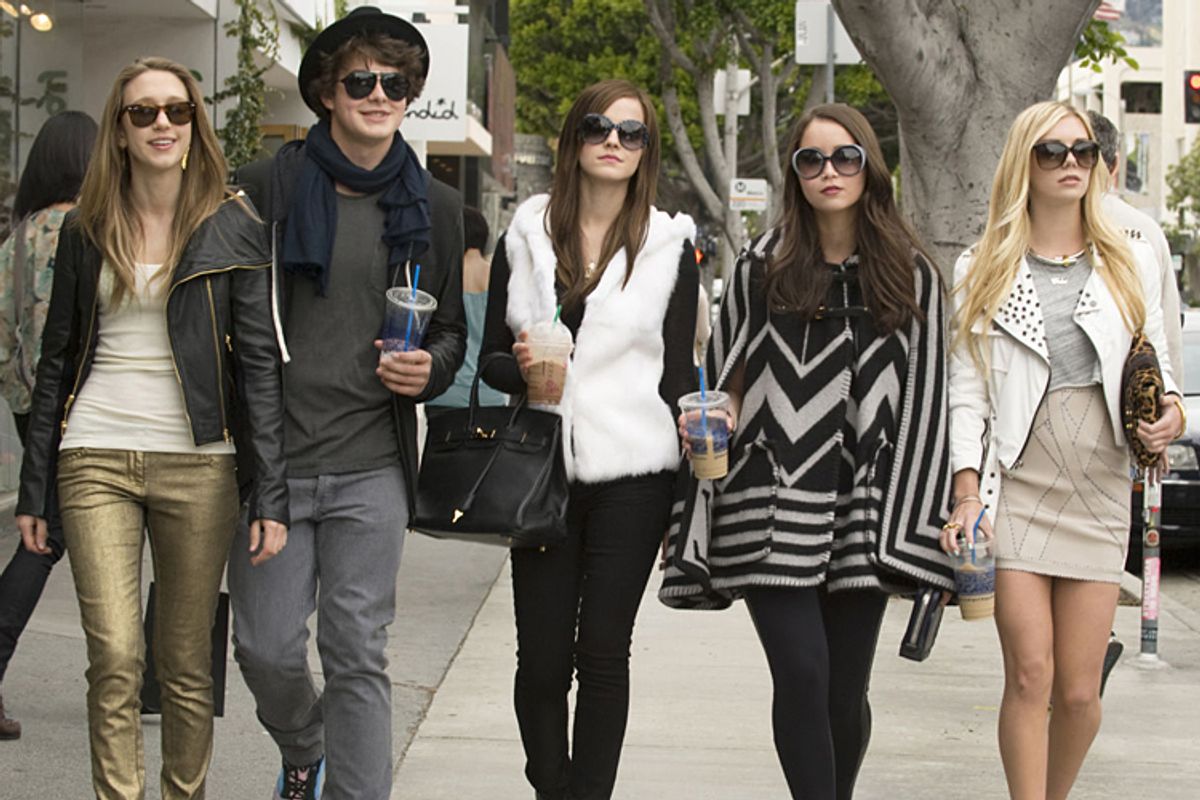 CANNES, France – Somewhere around the third time the gang of reckless kids in Sofia Coppola’s “The Bling Ring” broke into Paris Hilton’s house – and, by the way, that really is Paris Hilton’s house – I had a realization. While I theoretically agree that crime is bad, I actually had no objection to them stealing handbags and watches and dresses and money and (allegedly) cocaine from Hilton. I mean it: I don’t care. It’s not as if Hilton actually did anything to earn all that crap she has in the first place, and she apparently didn’t notice for many weeks that anything was missing! As far as I’m concerned, the envious, Adderall-dosed suburban teens of the Valley can tear down her house with their bare hands and fight over the Gucci scraps. Maybe it’s a juvenile and stupid version of redistributing the wealth, but this is America, a juvenile and stupid country. What can you expect?

What did concern me about the depiction of this story in “The Bling Ring,” however, is the idiot-scale media illiteracy of everyone involved. Apparently Paris Hilton kept her house key under her doormat, which is hilarious, but the kids who found it there and let themselves in did dumber things than that. They evidently didn’t grasp that stolen Rolexes and designer goods are easy to trace and difficult to fence, that rich people’s houses are full of high-end security cameras, or that it was a bad idea to post Facebook pictures of themselves waving piles of $100 bills or wearing clothes in which famous people had been photographed. At least as Coppola tells it, they were so disconnected from their own actions that it barely occurred to them that their "shopping" expeditions in the homes of people they officially adored were actually felonies for which they would likely go to jail. Kids these days! In my youth we used to watch something called “TV,” which taught us all sorts of conventional wisdom about crime and its consequences.

Coppola’s previous three movies -- “Somewhere,” “Marie Antoinette” and “Lost in Translation” --have all made the case in various ways that fame poisons whomever it touches, draining all the joy out of ordinary life. (This is presumably something Francis Ford Coppola’s daughter knows about first-hand.) In “The Bling Ring,” which premiered at Cannes on Thursday night to a mixed reception, she argues that the infection has become a pandemic that now touches everybody, while depicting a group of approximately normal American teenagers as being mindlessly narcissistic, cut off from reality and convinced of their own specialness by the self-regard of social media. It isn’t exactly breaking news that celebrity and crass materialism have become the guiding values of our culture or, for that matter, that fame has been decoupled from any actual achievements. But at least in Coppola’s hands those things become the basis for a cool and intriguing cinematic journey, largely free of either editorial commentary or amateur psychology.

If “The Bling Ring” is a lot closer to being a regular narrative film than was the avowedly avant-garde “Somewhere” (in which the first lines of dialogue are spoken at least 20 minutes into the movie), Coppola’s cool, observational aesthetic pulls away from the crime-movie or youth-culture formulas some may expect. Basing her screenplay on a 2010 Vanity Fair article by Nancy Jo Sales (as well as police reports and interviews with the suspects), Coppola tells the torn-from-the-tabloids story of a group of middle-class Southern California teens who burglarized a long string of celebrities, including Paris Hilton, Lindsay Lohan and Orlando Bloom. Sometimes they stole money and drugs, but mainly they took stuff: shoes, handbags, jewelry, watches, designer clothes by the armload. (Sales’ Vanity Fair article was called “The Suspects Wore Louboutins,” referring to a high-end shoe designer.)

Although most of the burglary locations in the film are sets, we do indeed see the inside of Hilton’s real-life Hollywood Hills home, including the “nightclub room” and her vaunted shoe closet with its surrealistic infinitude of size-11 high-heeled pumps. Whether these scenes of indulgent “crib porn” undermine the message of Coppola’s film depends entirely on what message you think that is, or whether there is any. Despite the visits to Paris’ digs, cut-ins from celebrity-news shows and a few brief, music-driven party scenes, “The Bling Ring” is a reserved and carefully composed picture, not particularly stylish or showy or meta. One of the burglaries, at the home of someone named Audrina Patridge (I had to Google her), is filmed entirely from across the street in a long shot during which the camera never moves. That was the work of legendary cinematographer Harris Savides, who died before this film was completed. (He shares the credit with Christopher Blauvelt.)

If anything, Coppola makes the kids of “The Bling Ring” seem a little more ordinary than they were. Two of the real-life girls in this circle of friends, Alexis Neiers (the basis for Nicki, Emma Watson’s character in the film) and her friend Tess Taylor (Sam in the film, played by Taïssa Farmiga), were well-known Hollywood clubgoers, despite being underage, who’d been signed up for an E! reality show well before being linked to any crimes. (Neiers was convicted of one count of burglary and served a short jail sentence, while Taylor was questioned but never charged.) Watson leaves Hermione Granger far behind with this profane and damaged character, but in the movie we're never sure how much of Nicki’s lifestyle, from her supposed modeling-acting careers to the incoming texts from Carly and Jude Law, is based on anything real. Which is perhaps the point: Once you venture down the rabbit hole of celebrity, there’s no such thing as “real.”

Coppola evidently didn’t want to tell a story about almost-famous girls who wanted more; that’s too easy an explanation, and beneath its bright, brittle surface, “The Bling Ring” steers away from explanation. Anyway, the mastermind of the burglaries wasn’t Nicki/Alexis but Rebecca (Katie Chang), a Korean immigrant’s daughter with a ruthless, acquisitive streak. (Her real-life model is named Rachel Lee, who was convicted of four burglaries.) Rebecca manipulates her new school chum Mark (Israel Broussard) into first burglarizing a friend’s house while the whole family is away, and then into figuring out when someone famous was known to be out of town and identifying her home address. (Which turns out to be pretty easy, even for truly huge stars.) At least during their early “shopping” visits to Hilton, Bloom, “The O.C.” actress Rachel Bilson and others, Rebecca and Mark keep it simple: They don’t smash windows or enter by force, they keep their selections modest and they don’t leave a mess.

The intense dynamic between Mark and Rebecca is marvelously rendered, and it’s the kind of teenage relationship you rarely see on screen, except maybe in Gus Van Sant pictures: He’s anxious and self-conscious, quite likely gay or dealing with some gender uncertainty; she’s ambitious and confident and wants a follower more than a boyfriend. Their story is neither a whodunit nor a whydunit; anyway, given the circumstances of our culture, does the desire to wear a Victoria’s Secret model’s clothes really require explanation? (One of the detectives in Sales’ story suggests that wearing someone’s clothing is somewhat akin to wearing their skin, like the serial killer in “Silence of the Lambs.” I’m grateful Coppola omitted that.) The only surprising part, given how easy it was for a couple of medium-savvy teenagers to pull this off, is that demented fans aren’t breaking into famous people’s houses every day.

Coppola is more interested in exploring the shifting internal chemistry and tangled teen slang of this girl gang then in moral or sociological questions, and it was fun watching this with French subtitles. (“Don’t freak out!” becomes “Commences pas à flipper.”) But amid the wry, flip and highly addictive flow of “The Bling Ring,” she keeps coming back to the marvelous comic actress Leslie Mann, who plays Laurie, Nicki’s terrifyingly upbeat New-Age Christian home-schooler mom. Full of supposedly positive wisdom and energy, Laurie is actually a hopeless parent, ever torn between pandering and apologizing. She convinces herself that her daughter’s involvement with a nihilistic band of teen criminals is a spiritual growth experience, and she can’t stop interrupting to tell her own story when Nicki’s being interviewed by a reporter. Much as Sofia Coppola always wants to play like she doesn’t care about stuff, in the end it always comes back to lousy and self-absorbed parenting.