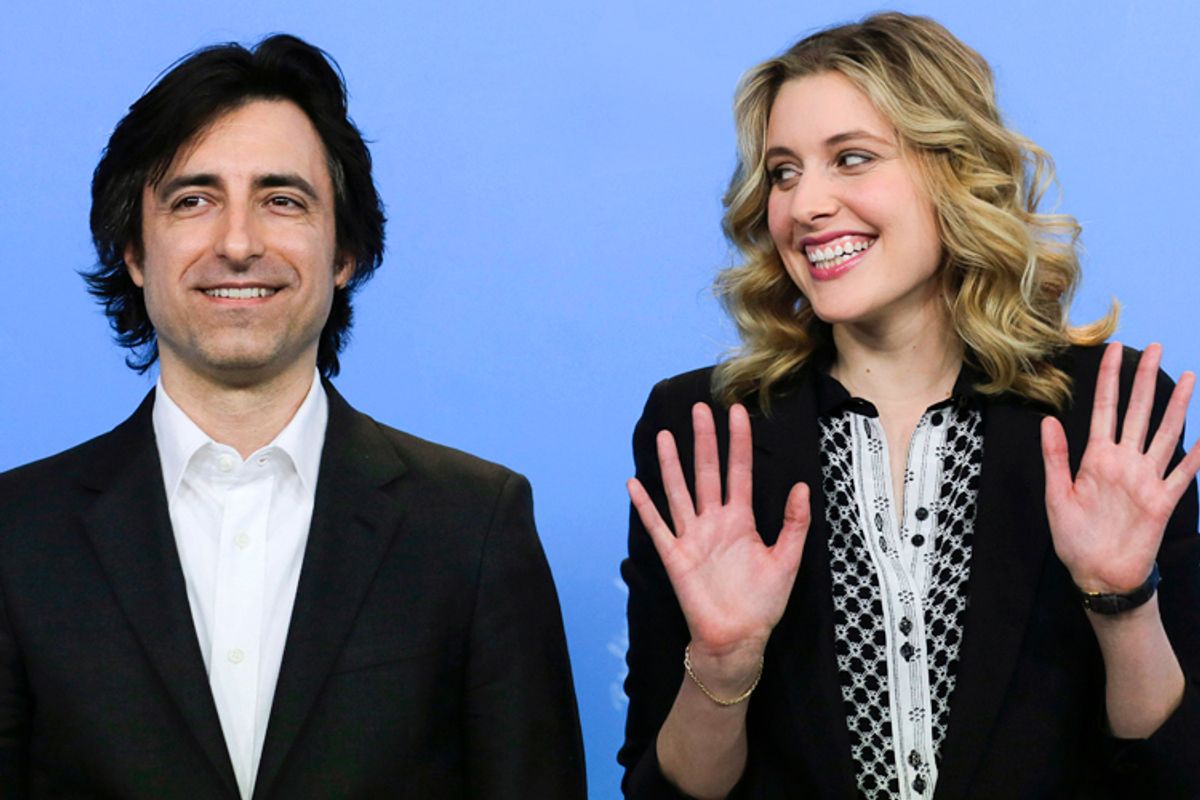 I met Noah Baumbach in 1996; Luna had recently released our "Penthouse" LP and Noah hired us to write music for his comedy "Mr. Jealousy." We have remained friends and have worked together a number of times since; in 2005 Britta Phillips and I wrote the score for "The Squid and the Whale," and this year have small roles (I play a Wall Street trader) in his latest film, the very funny "Frances Ha." Starring and co-written by Greta Gerwig, and beautifully shot in Brooklyn, Manhattan, Paris and Poughkeepsie, "Frances Ha" is an immensely enjoyable film.

Last week we sat down at Noah’s dining room table and recorded this conversation over a glass of red wine. Britta was hovering and interjected a couple of questions.

I watched "The Squid and the Whale" with my son Jack the other day and he loved it.

Well, this is the first time I have cachet with a friend’s kid. Wes Anderson’s films, 6-year-olds are crazy about them.

I remember Jack had come by the studio when you were mixing, but he wasn’t allowed to watch it yet. You told him he would like it one day, and you were right. Anyway I laughed again at the scene where Bernard (Jeff Daniels) talks about falling out with his literary agent because he made some disparaging comments about the Knicks. And he asks Walt if his girlfriend likes the Knicks, like it’s an important test. Does Greta like the Knicks?

When did you start watching?

I was late to the Knicks. My dad was a big fan. But I first started watching baseball, I became a Red Sox fan. My dad was a Mets fan. I wanted to have my own team and league. It was a way to share baseball but not feel like ... he had so much anxiety about watching the games, particularly the Knicks. Maybe because it’s easy to blame the refs.

Well, basketball games can chew up your insides.

I got really into the Knicks after graduating college. I wasn’t connected much to the Bernard King era.

That’s when I started watching, the Knicks-Celtics series in 1984, when Bernard carried the team as far as he could.

Who else was on the team?

I got into them during the Riley era. I used to watch "Knicks Rewind," where you could watch the whole game in the span of an hour. Now I don’t like watching a game after it’s over.

At the "Frances Ha" screening at LACMA, you mentioned in the Q&A session how hard it is to make a film in black-and-white.

I meant business-wise, because most of these companies cover their costs with TV deals. And most TV deals won’t take black-and-white. A lot of black-and-white films generally have a color version that will be used for TV.

Is that what you are going to do?

Have new technologies made it cheaper and easier to make films?

Certainly it’s easier to do it now. It’s perhaps not dissimilar to what happened in the music business. I’m guessing when you started, you had to rent studio time, and it was expensive, but now you can make a record at home.

Also, you can do endless takes.

Britta Phillips: But you spend a lot more time editing.

The work gets pushed onto someone else.

My editor, and I subsequently, when she is organizing the material, has to go through a number of takes of a scene.

From the recent scenes I saw you shoot, it seemed like you were doing at least 10 takes.

But we were also trying to get some very long takes. Someone asked me this week, did you really do 53 takes of one scene? But it was probably three pages of dialogue. If you shot it conventionally, you’d do a master shot, maybe eight to 10 takes, and then go in for the coverage and do the same again, and ultimately you really are doing just as many takes of the total scene. But we are doing the entire scene in a more economical -- and what I think is a more interesting way to shoot it. It’s interesting to figure out; how much story can you tell with this one shot? Where does it take you to? Sometimes it can take you through the whole thing.

Laura Dern was telling me that for "Inland Empire" (not in the movie) they started with a 70-minute monologue, one long take, though they had to stop after about 40 minutes to change the caro.

Yes, that is true of "Kicking and Screaming." But when I saw "Rushmore," or even "Bottle Rocket," I thought he really had figured out his visual language at the same time as he figured out the language of the script. Not that he hasn’t changed, or improved since. I was probably talking more about "Mr. Jealousy" -- which is where we met (Luna provided the score). I haven’t seen it for a while, it’s probably pretty good, but in retrospect maybe I didn’t take it one direction or the other. I could have pushed the whole notion of jealousy more, and perhaps the characters should have been younger.

There are some truly funny things in that film.

Carlos [Jacott] is great in it.

Yes, that’s how we met, we met for dinner at Great Jones Cafe.

We had the Andouille sausage.

Britta: How were you introduced?

It was the music supervisor who suggested Luna. And I had heard your records, but they sent me the EP with the "Kids" cover.

That was a collection of B-sides.

But I liked your cover of “Thank You for Sending Me an Angel.” It’s nice being friends over a period of time with people whose music you like so much, or other filmmakers, seeing people change, go through trials. We have been friends since 1996.

Since then I have had something to do with every film you have directed, either a cameo or ...

You wrote “Everybody Felix.”

Which plays twice. I had seen you and Britta play the song at the Hiro Ballroom. There was something very exciting about it; it sounded like you had three guitars going at once ... the whole guitar melody is so strong, it’s that happy/sad thing. . .

Rob Sheffield came up with a list recently, of his favorite placements of songs in film. I thought about a few of my own favorites. One is “All Along the Watchtower” in "Withnail & I" (and, by the way, that film contains what the New Yorker profile mentions as a Baumbach theme -- how do people escape their 20s?). But the use of “Street Hassle” in "The Squid and the Whale"; you and I were at a film screening together last year and Lou Reed happened to be sitting in front of us, and he said that was perhaps his favorite use of one of his songs ever. It’s a great moment in the film, the lyrics have nothing to do with the film but it works so well.

Yes, that was a great compliment. You had given me that song on a mixtape. The decision; well, we knew the cello part seemed great for his running, we thought maybe should we segue into something else. But the revelation was letting it run through the scene, how emotional it was because his singing has so much feeling in it.

Britta: I didn’t love that song till I heard it in the film ... a great song in a film, when it works.

It happens a lot, you see a film and hear a song that maybe you own elsewhere, but you hear it in a different way now, and it sounds amazing.

When I saw "Margot at the Wedding" for the first time, I remember feeling, right from the opening scene, that I was now watching a great director, that you had gotten better and better. And I have the same feeling watching "Frances Ha." But still when I watched "Squid" the other night -- where technically I’m sure you weren’t as knowledgeable as you are now -- but that film packs an emotional punch. And I think about my own early albums, well, sometimes even though you have no idea what you’re doing, the early material is very strong emotionally.

Yeah, there are some things you can’t repeat. I felt it when I revisited "Kicking and Screaming" for the Criterion DVD. Simultaneously thinking, I would do so much of this differently now, but also thinking I could never re-create this, it has something working for it ... Of course, I listen to early Galaxie 500 records, but I don’t think “It’s a young man’s music.”

There are a few moments that make me cringe, but I still get a real charge out of those records.

"Squid and the Whale," there was so much buildup to making it.

Casting and financing. Until finally we said, well, let’s just make it with what we have; it had a tiny budget. And we made it in 23 days. The opposite of "Frances."

The great thing about "Frances," it seems you cast whoever you want, and the cast is perfect.

Yes, the last few films I have cast whoever I want. We go through an audition process for pretty much everyone. But you and Britta didn’t have to audition!

I don’t know if you feel this way about your career, if "L’Avventura" was a reinvention, or if Luna was a reinvention. That’s how I feel. I’ve had a couple of those, where I made myself do something different.

Yes, recording "L’Avventura" with Britta was fun, was joyous, was a release.

I thought of it a little bit, with "Frances," and that I knew you as you were making that record. It sounded like you were having fun. At that time it was my favorite thing you had done.

Britta: It was exciting, no moping.

They say that A&R people look for someone who is going through a crisis in life, because that will lead to a more interesting album. "Frances Ha" feels joyous from the moment it begins. The music helps that too. It’s also biting at times, and wistful at others ... I like how the film doesn’t resolve. It ends with a beginning.

"Portnoy’s Complaint" ends, after a book-long rant, with a new paragraph, “now vee may begin.” And you realize he was talking to a therapist. I’ve always loved that idea -- and now we start.

And you sense, now something new will happen.

Back to "Margot at the Wedding": In the New Yorker piece it is commented on, how people are more tolerant of characters in a TV show than they are in film. They will tolerate bad behavior in Tony Soprano or Don Draper, and still you love them.

Well, also they will tolerate behavior that is expected in a gangster. Or even on "Mad Men," because it’s a period piece, so that feels safer. There’s distance.

But people seemed to have a hard time with the conflicted mother that Nicole Kidman portrayed in that film. Is part of it perhaps that they will accept complex, or selfish behavior from a man but not from a woman?

Yes, mothers are a complicated subject. Apparently a difficult subject.