Photographed secretly at home: Is it art?

A gallery show features pictures of residents shot through their windows. The subjects are understandably annoyed 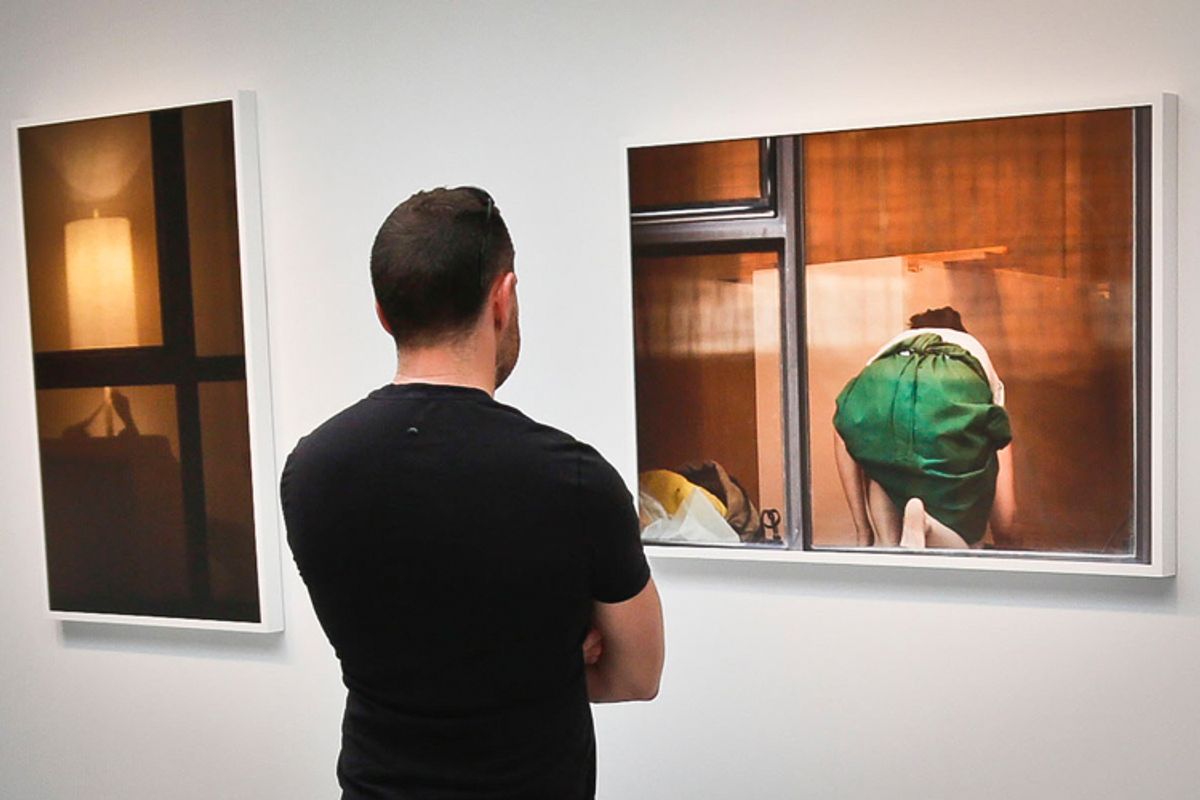 A visitor views the photography of Arne Svenson on Thursday, May 16, 2013 at the Julie Saul Gallery in New York. (AP/Bebeto Matthews)
--

When does an image become an invasion?

For as long as there have been cameras, there have been photographers who've captured the intimate, unaware moments of human existence. Masters like Eugène Atget and Henri Cartier-Bresson defined photography as an art form with their images of people simply going about the business of being themselves. And the recent posthumous fame of Vivian Maier is ample proof of our obsession with the beauty of the unposed moment.

Yet in a world in which anyone with a phone -- which is pretty much everyone -- can be an amateur lensman, the opportunity to go too far is always present, if fuzzily defined. There is an entire genre of creepy quasi-porn gleaned from surreptitious photos of women, and a whole new class of sex offenders thanks to it. And Instagram, when not fulfilling its primary function as a chronicle of other people's meals and manicures, is often one big exercise in "Look at that stupid person over there." But in a daily world of questionable ethics, photographer Arne Svenson has managed to come up with a new head-scratcher. For his latest project, he didn't go out to the street. He peered into the window.

"The Neighbors," currently on display at the Julie Saul Gallery in Chelsea, is, at first glance, a quiet, painterly collection of intimate yet semi-abstract images. A seemingly nude male figure stands illuminated behind a curtain. A woman sits serenely, holding a menacing pair of scissors. A lone figure naps on a couch. A figure in a green dress crouches on the floor, her rear pressed close to the glass.

None of the photos show the subject's faces, but the residents of the luxury condo across the street from Svenson are understandably none too thrilled to see their asses turned into artwork -- that's fetching up at up to $7,500 a print, all without their consent. As a resident told the Associated Press Friday, "I don't feel it's a violation in a legal sense, but in a New York, personal sense, there was a line crossed." An email circulated among the residents recently reads, "I love art, but find this to be an outrageous invasion of privacy." Another resident told the "Today" show ominously, "I have children, young children, in this building. I'm sure there's a lot we haven't seen. What else is there, and what else is he planning on doing with them?"

In the show's gallery notes, Svenson says, "The Neighbors don't know they are being photographed; I carefully shoot from the shadows of my home into theirs." It may be art, but also, eww.

In a post on Eric Kim's street photography blog last month, photographer Mike Aviña writes, "While each photographer has to decide how best to work, we would all do well to keep in mind the larger values at stake."

All of us are now potential subjects. If you live in a big, expensive glass building, you do so at the risk of having your moments at home in repose observed and recorded. Yet the residents of the Zinc building, where units have listed for as much as $6 million, should have as much right to dignity and respect as the homeless man passed on the sidewalk that some moron with an iPhone thinks would make a cool shot.

At its best, photography doesn't detach itself from humanity. It illuminates it. And you can make something that's interesting to look at, and legally acceptable to do, and reveal more about yourself and your own larger values than you ever could about the people you peep.