Should graduation ceremonies be multi-faith?

Student bodies are increasingly diverse, and yet many universities refuse to abandon their religious traditions 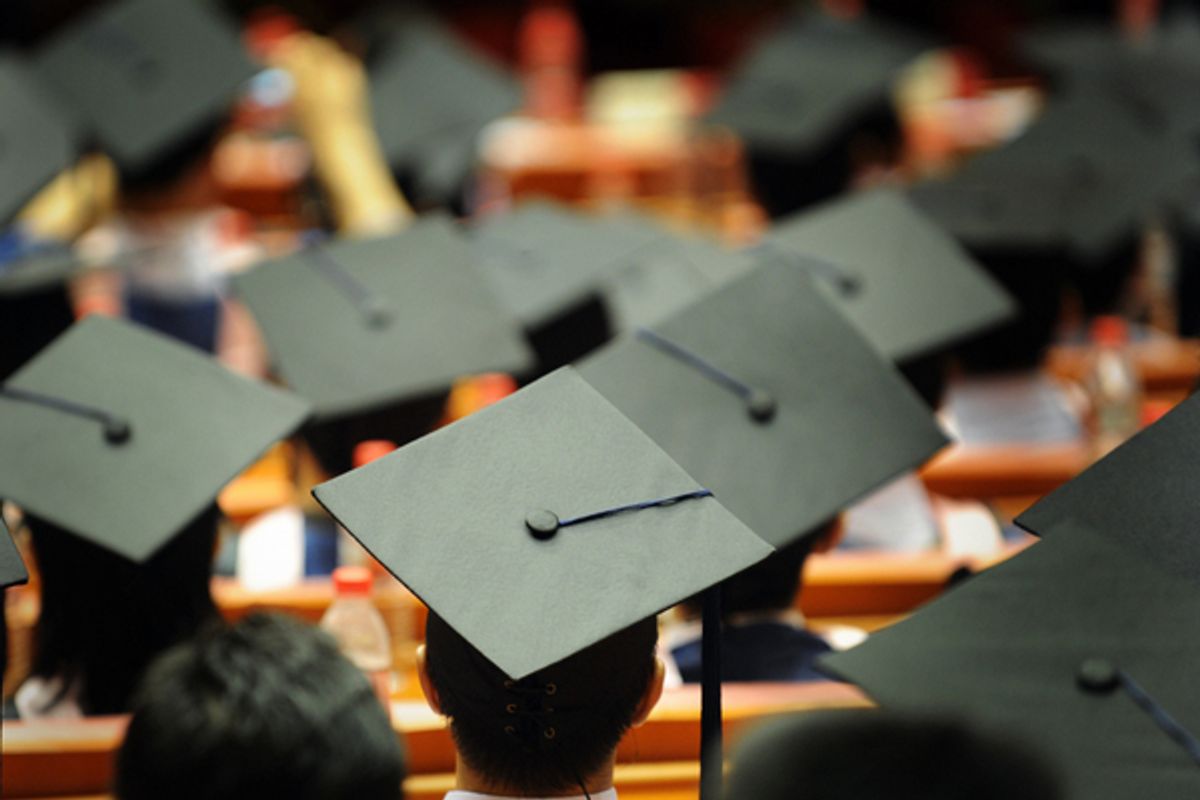 It’s graduation season, and as such a golden opportunity to observe the various ways religion is handled in American public life circa 2013.

A graduation is a momentous occasion for graduates and their families, and such a major rite of passage tends to evoke some kind of effort on the part of high school, college, and graduate school leaders (and commencement speakers) to reach for rhetorical profundity.

But what kind of profundity is acceptable in our pluralistic public space? Can a public high school organize a graduation service that appeals to religious themes? Can a religiously diverse private college invite a commencement speaker representing only one of the many religious traditions represented in the room? Or, given religious diversity, should schools try to maintain an air of resolute non-religiosity?

I propose that three main patterns emerge from these observations: no faith, single-faith, and multi-faith.

No faith: My two youngest children graduated from a large, quite diverse public high school here in Atlanta. Both went to baccalaureate services and graduation exercises. At none of these four events was any kind of religious expression attempted, not even at the baccalaureate services held at local churches. I was also struck by the lack of any kind of patriotic or ethical exhortation. The graduation events were primarily memorable for their extraordinary speed. Lacking anything much to say, school leaders managed to get our children graduated in barely an hour’s time. I found the sheer rhetorical emptiness of the events deeply dispiriting. Graduation meant nothing other than being done with school. No evidence for any broader purpose for education, or for life, was offered or could be discerned.

Single-faith: My oldest child graduated from both a conservative Christian high school and conservative Baptist college, in west Tennessee, before we moved to Atlanta. These schools did not hesitate to offer religion-drenched graduation exercises. Prayers, music, symbols, and speakers all spoke a particularistic kind of evangelical and Baptist religious language. The schools had been organized by serious Christians to accomplish serious Christian purposes. The name of Jesus was often deployed, encouraging graduates to live for Jesus as their instructors had so often emphasized.

Surely there were family members, friends, and even graduates in attendance who did not share that agenda, but there was no question about what the schools were about and what they expected their graduates to be about. Anybody present who didn’t share that agenda would just have to deal with it.

Multi-faith: Recently my son graduated from a formerly Baptist liberal arts college also deep in the South. His graduation exercises, including a baccalaureate service, were characterized by a multi-faith ethos. The baccalaureate was especially striking, with readings and rituals from Buddhist, Hindu, Jewish, Muslim, and Christian sources. The address from the university president emphasized the centrality of “the spirit” rather than just material success.

The commencement speaker was an activist Catholic nun who emphasized solidarity with the global oppressed and midwifing a new world of social justice. The overall ethos communicated respect for the best insights of the world religions and a commitment to their social justice teachings, while also subtly warning against calcified religion unable to change with the times or to serve the common good.

On reflection, it is clear that these three faith orientations also carried with them implicit or explicit ethical connotations.

The “no faith” high school graduation also included “no ethics” morality. These were truly “naked public square” events. Surely it doesn’t have to be this way; one can imagine a secular high school or university maintaining a studious religious neutrality while communicating some kind of moral vision. But I have not seen it.

The single-faith graduation exercises combined evangelical/Baptist Christian religiosity with its associated ethical vision of personal piety and Christian witness in a secular world.

The American public square circa 2013 seems to vacillate between these three options. At the national level events are sometimes “no faith” and often “multi-faith.” Certainly the small-town South is an exception, as the public square often remains drenched in a single-faith Christian religiosity, even at the most public of events. But that time has passed at the national level.

If it comes to a choice between a “multi-faith social justice” public square and a “no faith/no ethics” public square, I choose multi-faith. But there’s something lost even there, as the particularities of the world’s religions and sacred texts are sanded down to much thinner versions safe for public display.

For this reason there will always be dissenting sub-communities in our land who refuse either to play by no faith or multi-faith rules and continue to educate their young in robust versions of their own distinctive religious traditions. And they will continue to contend for their vision in the much more diverse American public arena.