Stop comparing everything to "Girls"!

Vampire Weekend, "30 Rock," Sheryl Sandberg, "Spring Breakers" -- everything is just like "Girls." Except it isn't 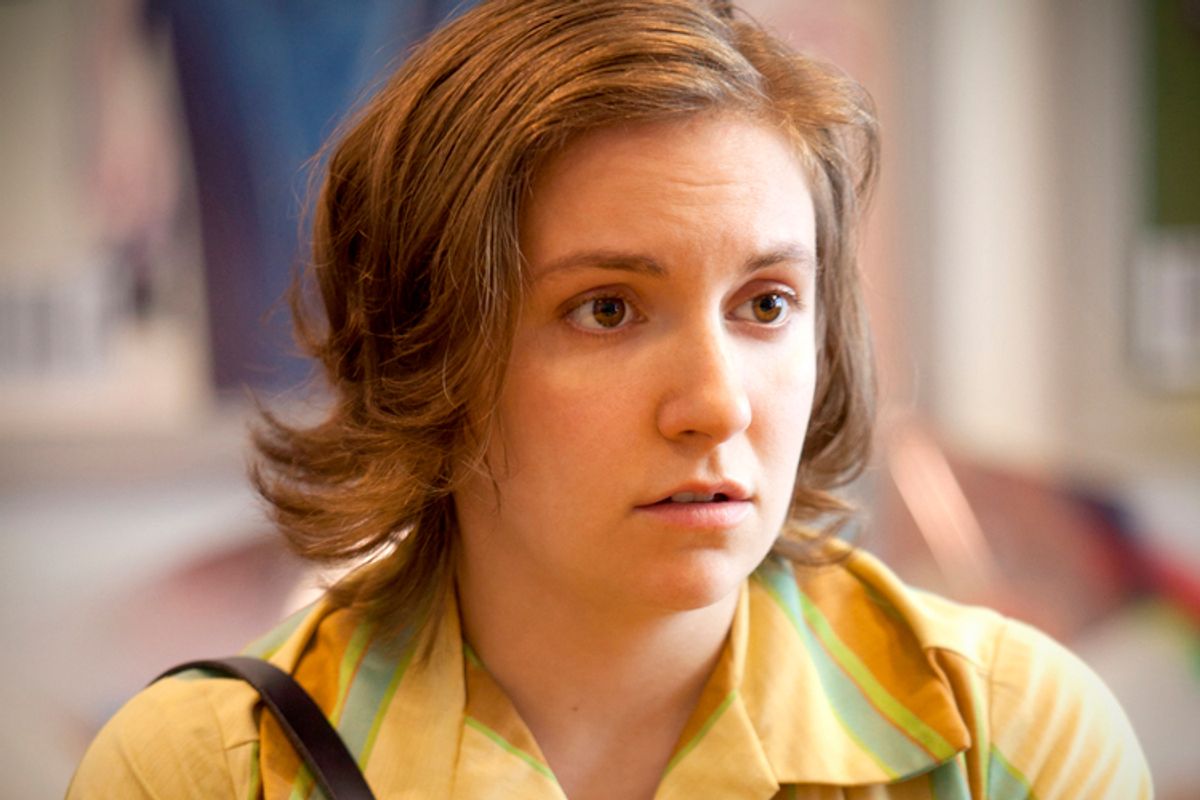 "Frances Ha," a film co-written by Noah Baumbach and the actress Greta Gerwig, is about a woman in her late 20s who is thwarted in her desire to become an artist by a lack of resources.

So naturally it must be just like "Girls"! Except it isn't. At all.

Hannah Horvath, the hero of "Girls," is younger than Frances and far more confident in her art. Although Hannah's family won't help her pay the bills, she seems to, as of late, magically have enough money to pay the bills every month. Frances, with a few more years of disillusionment under her belt, faces down far more serious challenges than does Hannah -- which isn't a criticism of "Girls."

But none of those differences have stopped the easy comparisons. Turns out there really is a more pernicious and lazy cultural reference than comparing anything in the 1960s to Don Draper's life, or equating anything quirky and indie with "Portlandia." Please, let's come to an understanding: Culture writers of America, we will believe you know about "Girls" even if you don't compare everything about young people in cities to Lena Dunham.

It's just that "Girls," for all its "voice-of-a-generation" accolades  -- how much must Lena Dunham regret sticking that self-mocking line in her show's pilot? -- depicts a fairly narrow milieu. And writers who don't necessarily understand it take that to mean "all twentysomethings" or "all women on TV" or "all sloppy dressers." Even another work of art about a woman in her 20s isn't congruent with Hannah Horvath's life -- to the degree that A. O. Scott, in his New York Times review of "Frances Ha" Friday, actually stipulated that he wouldn't compare the two at all or even mention the show more than once.

"Girls" has become the chic reference du jour -- its plotlines allowing anyone writing about practically any topic to get a hit of that sweet, sweet SEO. But many of the positive comparisons seem ineptly made (do Hannah and Liz Lemon have that much in common, besides being popular characters on television?). And the negative comparisons seem pointless (if Mindy Kaling isn't much like Lena Dunham, why mention it? Dunham's show, if you look at the ratings, is barely watched at all).

Let's review the recent comparisons to learn just how many things are just like "Girls":

After its premiere, “Frances Ha” was greeted with both critical acclaim — The Hollywood Reporter called the film “offbeat and smart,” saying that it was “incredibly rich to watch” — and comparisons to a similarly New York-centric show about youth and female friendship, Lena Dunham’s “Girls.” (New York Times)

It’s unlikely that, outside the world of international film festivals, Korine was ever saddled with the burden of being a generational spokesperson but, in any case, that position is now occupied by Lena Dunham, who at twenty-six is scarcely older than Korine was during his initial successes of the 1990s. (New York Review of Books)

"The Comedy" shares some thematic DNA with "Girls," though Lena Dunham's world is far kinder and less shrill and about 100 times less dudely. (Grantland)

You did not really think I would get through a whole essay on gender and popular culture without mentioning her, did you? But the reception of “Girls,” even more than the show itself — which is, to keep things in perspective, a clever half-hour sitcom about a bunch of recent college graduates — is an interesting sign of our confused times. (New York Times)

I can see Hannah Horvath of "Girls" as Lemon’s much younger TV sister, also failing to find the work-love balance onscreen while her auteur, Lena Dunham appears to be having her cake and eating it, too. (MSNBC)

And unlike "Girls"’ Hannah, played by Lena Dunham, she’s found her life path, and she has had sex with more than a couple of people. (New York)

Ann was searching for someone who, as Hannah Horvath would say, “wants to hang out all the time and thinks I’m the best person in the world and wants to have sex with only me,” not necessarily someone who could get into the baby-making business with her. (Vulture)

She also assured the audience that the content of her show would stay major-network-appropriate. "Don't worry, I won't be doing a Lena Dunham," [Wilson] quipped. "I'll only put my boobs out if it's necessary for the storyline or a Wednesday." (Huffington Post)

"Keeping Up With the Kardashians"

Blurring the line between Lena and Hannah, between real life and scripted television, is what Dunham is all about. By mining her personal experiences for material for her barely fictional show, she’s essentially fashioning herself as a reality-TV star. And not just any reality star: Dunham is taking a page from the Kim Kardashian playbook of how to become famous. (Washington Post)

MTV's "Underemployed" (among other programs)

The pilot opens with a shot reminiscent of both "Girls'"' Hannah Horvath and "Sex and the City's" Carrie Bradshaw. (Flavorwire)

Pretty much every half-hour woman-centric comedy on cable

When the three leading ladies of "Veep," "Nurse Jackie" and "The Big C" decide to take on lovers, the women are the ones in charge. Versus the characters in "Girls," who are mired in a sexual passivity that is bewildering in these outspoken times. (Women's eNews)

We are now used to art that poeticizes these sorts of feelings, whether it's Drake's "Take Care" or the pathetically relatable final scene in David Fincher's "The Social Network" in which the protagonist is left alone, waiting for his ex to accept his friend request, or the particularly great moment at the end of the third episode of "Girls," where we watch Lena Dunham's character Hannah brighten her mood by deleting a solipsistic tweet and replacing it with a slyly optimistic one, inspired by Robyn's "Dancing on My Own."(Pitchfork)

Adele, and her decision not to write a memoir

I guess not everyone is as confident in the profundity of their life experiences as "Girls"' Hannah Horvath. Which is kind of a shame, as Adele seems like the kind of young person whose memoir I might actually like to read. (The Gloss)

Is it also too much to hope for a similar downturn in stars going the way of famous designer brands because that’s the done thing?

Because listening to "Thrift Shop" this week, my mind replayed Lena Dunham at the Golden Globes, in slow motion. (National Post)

In terms of choice, Lana and Lena imagined better selves and doggedly worked toward achieving those possibilities. Instead of focusing where others are in the slow race toward the final equalizer, tracing internal fires backwards may point to your personal discontent — and where to begin. (Psychology Today)

The works of Edith Wharton

Although there have been huge shifts in gender roles since Wharton's time, her themes — women dealing with independence versus security, love versus money — are still at the forefront of the cultural conversation. [...] there's "Mad Men," where Joan, Peggy, and Megan all bring to mind Wharton's characters, as does Hannah Horvath on HBO's "Girls," who flounders in New York City once her parents cut her off. (Entertainment Weekly)

"Lean In," by Sheryl Sandberg

So yes, I leaned in, but not into business, or business as Sheryl Sandberg defines it. I was, and still am, a "Girls" girl, more Hannah Horvath than Sheryl Sandberg. Let me qualify. I did not have OCD, I was never comfortable naked and my parents did not cut me off financially. But I did wander through my 20s too lost to lean into anything meaningful. (Chicago Tribune)

"How Should a Person Be?," by Sheila Heti

The work of Elizabeth Wurtzel

Does Hannah Horvath, heroine of the HBO series “Girls,” stand to learn any lessons from Elizabeth Wurtzel’s January 6th New York magazine story “Elizabeth Wurtzel Confronts Her One-Night Stand of a Life”? It’s almost absurdly perfect that the article appeared just days before the start of “Girls”’s second season. You can imagine Hannah, the emotionally raw, often exhibitionist alter ego of the show’s creator, Lena Dunham, hunched over her iPhone, devouring the article bit by tiny bit before accosting her friends with a round of unanswerable, existential questions. (The New Yorker)

These spreads reveal just how out of touch the women’s print magazine industry really is. Allure seems antiquated championing Leslie Bibb as brave for posing nude when Lena Dunham is on Girls going about naked with her less-than-Hollywood-perfect body. (Slate)

A sweet, languorous British lass showed me to my table, hard by a wood stove and a corrugated-steel wall. I said, “I was sort of hoping you’d be naked,” referencing a Roberta’s waitress who had recently worked her last shift without clothes on (so boho and Lena Dunham-accustomed is the Roberta’s clientele that no patron batted an eyelash). (New York Times)

Would the “Girls” character Hannah Horvath, a young Brooklynite without much cash, subscribe to HBO? Or would she rely on her friends? (New York Times)

Being a relatively wealthy woman older than the "Girls" demographic

The central journey in "Girls" is how immature people fumble their way toward maturity. The parallels to world politics here are surprisingly strong -- after all, sovereign states are a relatively recent phenomenon in human history, so national polities also possess some immaturity. (Foreign Policy)

If you’re completely oblivious what the end of the lockout means, think of it as the premiere of the newest season of “Girls” being delayed for months, and then suddenly it’s announced that it will be coming back but with a lot fewer episodes to make up for lost time. (Blueshirt United)

So as HBO gets ready for the Season 2 finale of “Girls,” we’re hoping someone might consider a series showing why, for so many women here, finding a decent, affordable apartment is more difficult than finding a faithful, self-supporting boyfriend. (New York Post)

[M]aybe the designers were thinking of Hannah Horvath and all these young girls today. (New York Times)

The Way We Live Now, according to David Brooks's student Victoria Buhler

A group of young artists working in various mediums

When we first met 24-year-old Hannah Horvath on HBO’s “Girls,” she drank opium tea before declaring, “I think that I may be the voice of my generation.”[...]

Happily, real 20-somethings from New York — writers, poets and musicians — have a more clear-eyed take on themselves and their peers. Here’s what they told us about that “Generation Me” label, baby-boomer parents and more. (New York Post)