In the end, it argued that settling for a mediocre job for way too long can bring you happiness beyond measure 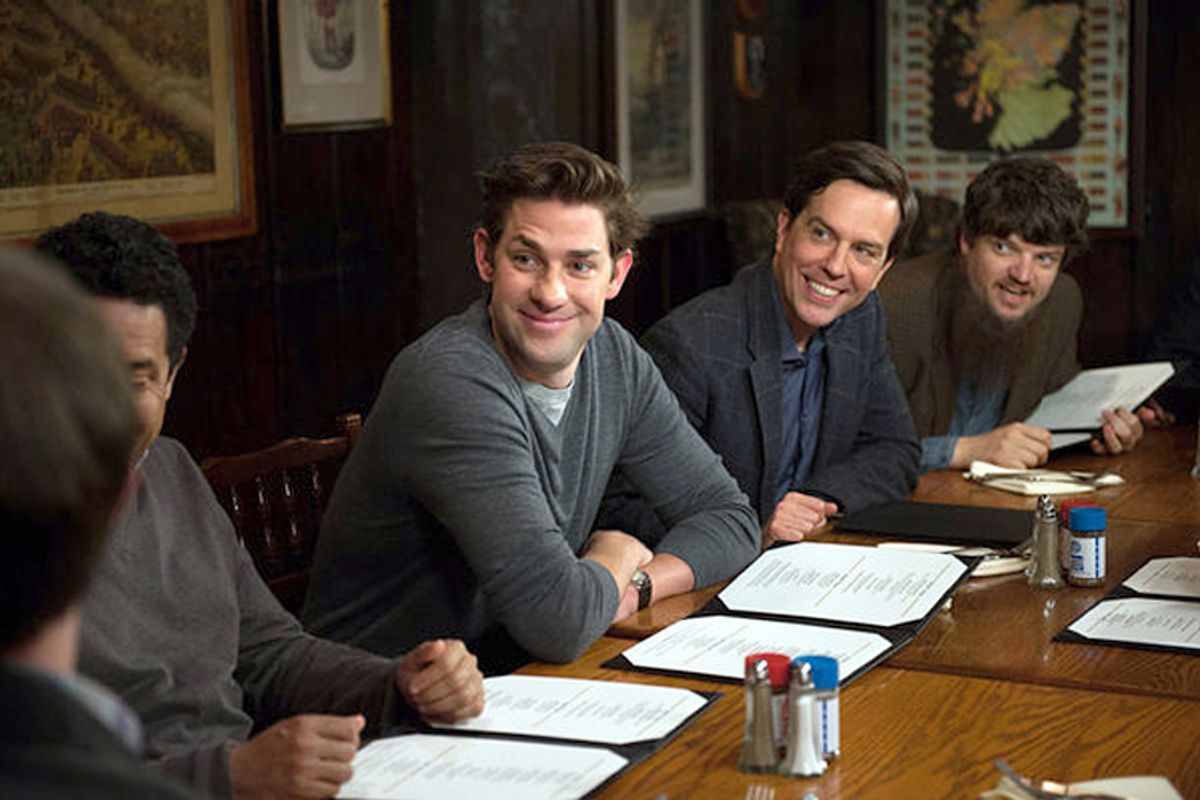 It is an article of faith that the American version of “The Office” is— or, I should say, was— nicer and kinder than its British progenitor. The original “Office,” with its endless shots of paper-stacked desks and droning copy machines viewed the workplace as fundamentally soul-sucking, the place where one ran out the clock on life, molested by monotony, unchosen colleagues, and bosses like Ricky Gervais’s David Brent, a man so keen to be recognized he would do any embarrassing, inappropriate, cruel, or disrespectful thing to seem cool. American audiences may have been ready to cringe, but not quite so excruciatingly. After its short first season the American “The Office” underwent some sweetening tweaks. Dunder Miflin became more ridiculous, less deadening, and Steve Carell’s Michael Scott was re-envisioned as buffoon motivated not by the desire to be cool, but a desire to be loved.

“The Office” knows how to do love, as it ably demonstrated for the last time in the very mushy series finale. For all the jokes and cold opens (Angela tossing her cat through the ceiling remains a favorite) or the time Michael gave a high-school class college scholarships and then took them back, “The Office's" most memorable sequences have been romantic, from Jim and Pam’s first kiss to Holly and Michael’s big romantic send off. If the series had ended— as it some ways it feels like it should have— when Michael Scott left two seasons ago, after having finally found his soul-mate, the show would have gone out not only as the series that popularized single camera comedies, made the mockumentry format ubiquitous, and proved the internet can help show finds an audience, but as a fundamentally optimistic show about a man who finally earned, and even deserved, the love and family he had been seeking so desperately.

Instead “The Office” stumbled on for two more seasons, righting itself only in the big push to its end with a incisive, sometimes uncomfortable look at the disintegration of Jim and Pam's relationship. But the finale demonstrated just how much the American "Office" fundamentally does not care about the cringe. It was shamelessly softhearted: since when are Kevin and Dwight even friends? Let alone sobbing in each others arms? Jim, who once hated Dwight, was not not only his best man, but goofily proud of kindly 'pranking' him.  The last line was downright "American Beauty"-inspired: "There's a lot of beauty in ordinary things. Isn't that kind of the point?" (The most touching moment in the whole episode, for me, was when Phyllis and Stanley talked about missing each other: at least they have an established history.)

In the end, the American “Office” was not just sweeter than the original "Office," it was a disavowal of its basic premise. It was about how settling for a mediocre job for way too long can bring you happiness beyond measure. It was a burnishing of office life and drone work. This tint from these rose-colored was so strong it actually makes the "Office's" sweetness double edged: If the British “Office” was a biting look at all the ways one man’s fantasy that he was special could turn him into a joke, the American “Office” was a fantasy about what makes people special in the first place. If every country gets “The Office” that it deserves, ours was a story about how being on a TV show will improve your life.

Jim Halpert has long been the barometer of "The Office's" darker inclinations. An essay on the Awl a few years ago argued that Jim made “The Office” the most depressing show on TV, a bright, funny, adorable guy, wasting his life at this paper company, putting all of his creative energy into pranks, letting his potential pass him by. This season, “The Office” confronted Jim’s lack of ambition head on— he joined a company and it almost destroyed his marriage. In the penultimate episode, Jim convinced Pam that she was more important to him than any job and that he would never resent her for holding him back from work. (“The Office” is maybe the only show to ever seriously do a men can’t have it all storyline.) The way he did so was by asking the documentary crew who have been following him around for nine years to cut a video of his and Pam's most romantic moments: Jim Halpert and Pam Beasley know that they are living inside of a romantic comedy. In the finale, confident in that knowledge having been told by strangers on the street she is living a fairy tale, Pam finally decided she was willing to help Jim achieve his professional dreams.

Sitcoms valorize regular people. They take workaday folks— moms and dad, friends and workers, most of them without impressive credentials— and make them hundreds of times more charming and adorable and funny and feisty than those people usually are. By choosing to make the documentary crew real, and not, as in “Modern Family,” just a filming device, ‘The Office” is one of the few shows that features characters who know they are being valorized, who know that someone, somewhere, thinks they are interesting enough to be on camera. Andy Bernard may have been the one to act out the most with this knowledge— to throw away his crappy job to be a viral video punchline— but all the Dunder Miflinites, with all their peccadilloes and implacable self-confidence have a camera gleaming in their eyes. They are people who seem like they are constantly being asked their opinion about everything, who have the sense that they are inherently of interest, intrinsically special. "Do you find that your life feels pointless now that nobody is filming you anymore?" someone asked the group, and if Toby was the only one to say "yes" he couldn't have been the only one who felt it.

In the finale, "The Office" was uncynical almost to the point of naivete:  it spent its last ten minutes praising reality TV! (The documentary was a scrapbook, it captured them perfectly, it made them a family, it showed their home, etc). If office life does not have to be the nightmare it was on the British show, doing what Jim did— spending 12 years at a job that was mostly stupid and boring— is a bit more nightmarish than Jim, who describes that time as also wonderful and amazing, is admitting. Pam looked into the camera and said that watching the show she realized how much time she had wasted and she hoped "someone out there saw this and said to herself, be strong, trust yourself, love yourself, go after your fears," even though the "The Office" and Pam's story have done nothing but champion the slow and steady. It's a testament to “The Office’s” skill, to the affection its characters and actors have accrued over nine seasons, that despite the downright corniness and shameless heart tugging of the finale, I hope if the cameras catch up with these guys again in 10 years, they will all still be so happy.