James Franco: "I really felt I was in conversation with Faulkner"

The writer, actor and filmmaker discusses the challenges and subtle pleasures of adapting "As I Lay Dying" 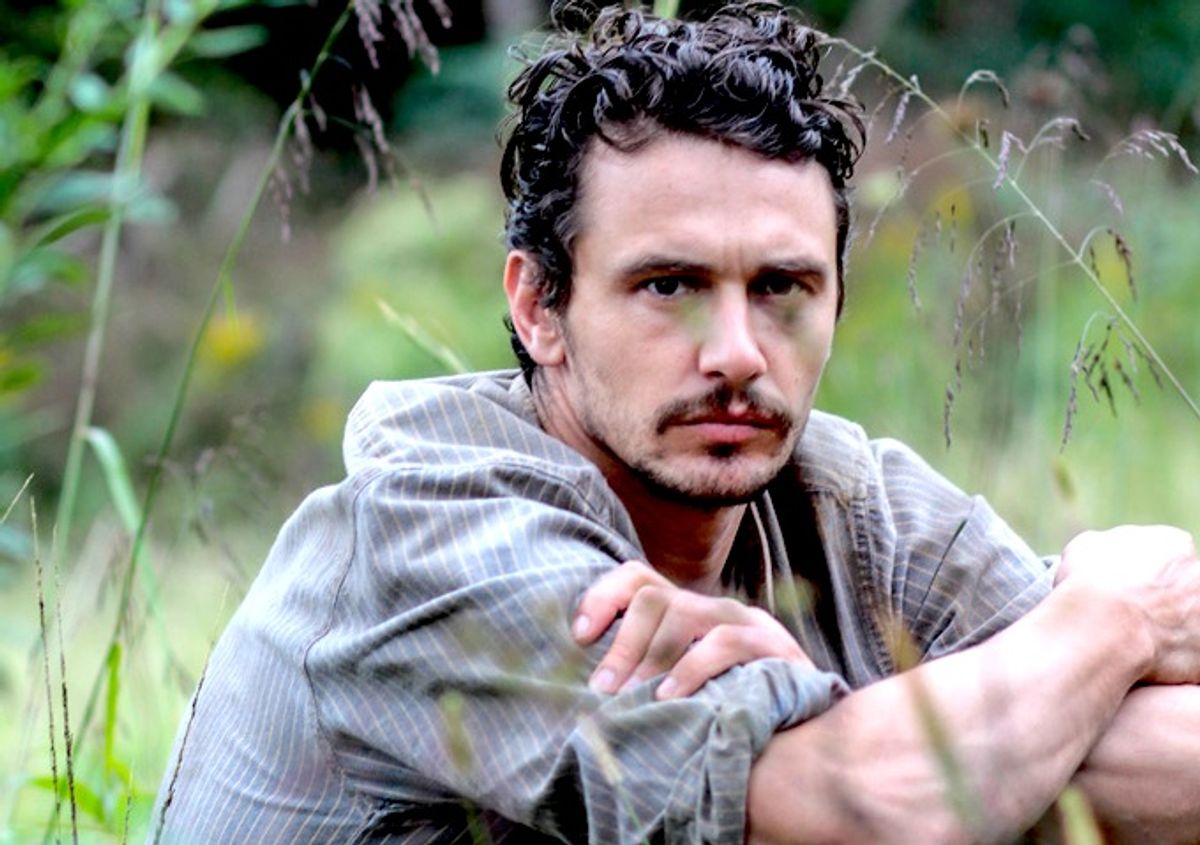 Scene still from "As I Lay Dying" (Alissa Whelan)
--

WHEN YOU STUDY Southern literature, it sometimes feels like all roads lead to William Faulkner’s Yoknapatawpha County, even if you had no intentions of going there. Case in point: while researching for a book on Truman Capote, I found a review he wrote in 1949 about — of all things — a modern dance adaptation of "As I Lay Dying." And this discovery led me to a whole string of adaptations of the novel, including a French avant-garde mime drama, an opera, different forms of physical theater, and a multimedia performance with marionettes.

Now, 73 years after the novel’s publication, Faulkner’s vision is finally coming to the silver screen, adapted and directed by James Franco, who also stars in the role of Darl. Filmed on location in Faulkner’s northern Mississippi, the film follows the epic journey of the Bundren family as they battle flood, fire, injury, and insanity to bury the mother, Addie, in her hometown of Jefferson. The novel is told in a series of 59 monologues spoken by 19 characters, giving it the feel of both a fragmentary dramatic script and a series of internal meditations, making it exceedingly difficult to translate to other media. As Mr. Franco explains below, bringing the novel to film poses interesting opportunities and challenges for anyone trying to capture and reimagine both the peasant realism and the modernist surrealism of Faulkner’s self-proclaimed tour-de-force. The film has already generated a great deal of buzz and will no doubt be the subject of much discussion, academic and otherwise, in the years to come. As "As I Lay Dying" debuts at the Cannes Film Festival this week, Mr. Franco granted me this email interview about his adaptation.

MICHAEL BIBLER: When did you read "As I Lay Dying" for the first time, and what was your reaction?

JAMES FRANCO: I read it twice in high school. I was in a bunch of trouble so I stayed home on the weekends so I wouldn’t get into more trouble with my friends. My father told me that "As I Lay Dying" was an incredible book with an unforgettable river-crossing scene. I can picture myself late on a Friday night in our cramped den at a tiny wood table with a single desk lamp hunched over the book, trying to understand everything it held. It was a puzzle, but a fascinating puzzle. Faulkner made me want to be a writer.

MB: When did you decide you wanted to make this novel into a film, and why did you choose this Faulkner novel over all the others?

JF: I thought about this film as a movie after reading an oral biography of Sean Penn and discovering that he once wanted to adapt the book into a film. Seeing that he had once showed me that it could be done, that others were drawn to the idea even though no film adaptation had been made in the 80 years since it was published.

The characters in this book had much to offer. They each have their own mini dramas that all hang on the through line of getting the mother’s body to town. I thought that I could make the movie complex in some ways because in other ways the story was very simple. There was a very clear journey and destination, but along that journey I could explore the characters and their souls in unconventional ways.

MB: Among your many audiences, your film will obviously be of special interest to fans, students, and scholars of Faulkner. Did you think about your Faulkner audience when writing your adaptation? What do you think they might say about your film?

JF: I don’t know. I am a Faulkner fan, so I suppose I tried to be loyal to my conceptions of Faulkner. Adapting a great author’s book is a wonderful experience because you feel as if you’re collaborating with that person. I really felt as if I was in conversation with Faulkner; even though he wasn’t alive, he was alive in his work. So, I tried to make a film that I thought he would appreciate.

MB: Your interest in studying literature at the master’s and PhD levels is well known. How much have your academic and scholarly interests shaped your adaptation?

JF: One of my Yale classmates, Matt Rager, helped me adapt the book, so in that sense my school connections had a big influence on the film. I am working toward a PhD in English with an emphasis on media theory and 20th-century American literature. Adapting this story from one medium to another had everything to do with my areas of focus. I tried to understand how to be faithful to the spirit of Faulkner’s tone and structure while representing them in a new form.

MB: Did you read any literary criticism about the novel, about Faulkner, or about modernism before or during the process of adapting the text to film? Did any particular critical approach influence you most?

JF: I suppose the ideas of Christian Metz allowed me to think about film as a language, and to see parallels in the grammar of written text and grammar of film.

MB: In my research I’ve discovered at least 14 different theatrical adaptations of "As I Lay Dying." Did you know about any of them before you started your adaptation? Have you seen any of them?

MB: As an actor, writer, and director, can you share your thoughts about the differences between live theater and film? What do you think a film adaptation of the novel can do that a live performance can’t, and vice versa?

JF: One of the main things that a filmed adaptation can do that a stage adaptation can’t do as easily is constantly reframe the action. A film can give close ups, a film can be much more didactic when telling an audience what to look at. A stage production has the powerful advantage of live performance, but in a road story like "As I Lay Dying," a staged performance has to depend on stage conventions to imply travel. Our film was shot in Mississippi, so we show the actual countryside Faulkner was writing about; on stage the atmosphere would be contrived. I’m not saying one is superior to the other; I’m just pointing out what we got from the filmic form. Of course there are other things that a theatrical production could do better than a filmed production.

JF: In the book each chapter is told in the first person by different characters. This structure creates multiple perspectives. I wanted to capture this kaleidoscopic feel, but I felt if we broke it up into chapters like the book it would feel too rigid in film. So, we came upon the idea of split screen to show multiple perspectives. It gives a sense of multiple experiences happening at once, more of a sense of all the characters having distinct experiences while on the same journey.

In addition Faulkner writes in two levels of differing complexity: when the characters speak out loud, their diction is fairly simple and direct, but their interior monologues are very complex. The diction used to express their inner lives is much more advanced than these characters would ever be able to articulate. Because it transcends what they would realistically be able to express to themselves, it creates a transcended feel to the book. The inner monologues elevate the book to epic status. It is metaphysical. We used a particular kind of voice-over to capture this unusual kind of inner thought. The characters talk directly to camera to give the impression of confession, or that they’re in a special, transcendent place.

MB: Can you say more about what you felt you had to change, and why?

JF: We had to cut most of the Cora stuff so that we could stay with the Bundrens. There are only so many characters one film can focus on without overloading it.

MB: One of the critiques often made of "As I Lay Dying" is that the writing is too “literary” and doesn’t accurately reflect the vernacular of Mississippi or the South. Did Faulkner’s use of language and style create any particular challenges for you?

JF: No, like I said above, we turned the literary writing into spiritual moments. The story can be read on two levels: a Southern family’s petty struggles, and an epic about the universal struggles of being human.

MB: Did you make any special consideration of the novel’s Southernness in your film? Did you worry that your characters might accidentally come out looking like hillbilly stereotypes? Since you filmed so close to Faulkner’s home in northern Mississippi, how important is Mississippi to the film thematically?

JF: Yes, our production design and our characters all feel Southern. We also cast many of the roles in Mississippi, including the boy who played Vardaman, which added a lot of Mississippi authenticity to the film. I wasn’t worried about stereotypes; all the actors were so good and so smart they easily avoided falling into stereotypes.

MB: A lot of documentary films and photographs were made about the South during the Great Depression, when the story takes place. Did you have any of these in mind when you were thinking about the visual aesthetics of your own film?

JF: I suppose. My costume designer and production designer pulled many references.

MB: How did you handle the novel’s meditations on the insufficiencies of language and the arbitrary nature of words, what Addie calls “shape[s] to fill a lack”?

JF: We used that whole monologue in the film. So, Faulkner’s language speaks for itself.

MB: At the same time, this is very much a novel about the materiality of the body — about desiring bodies, pregnant bodies, bodies in pain, disfigured bodies, dead bodies. Does your adaptation put any emphasis on questions of physicality and materiality?

JF: Yes, it is inherent in the struggles of the characters. I wanted to make this movie particularly visceral and raw because I felt that so many Faulkner adaptations were very precious, they didn’t show the brutality and passion I found in Faulkner’s books. I wanted to be sure to emphasize the physicality of the journey and of the family’s struggles.

MB: Some might be tempted to compare your film to the Coen Brothers’ "O Brother, Where Art Thou?," in which a much older, mythological story is retold through a journey taken by a cast of Southern characters. How would you respond to that comparison? Did you give any thought to the novel’s use of mythology?

JF: Not really. The Coens use a lot of humor in their film; we don’t have that much humor in ours. I love their movies, but I don’t think ours is like their film at all. I suppose the biggest thing I took from them (Tim Blake Nelson aside) was their use of irony. There is an awareness of the strangeness of their characters without dropping into satire, just an intelligent knowingness that can be found in a bunch of Kubrick films like "Barry Lyndon," and "Paths of Glory." I hoped to capture a little of that irony, so that our film didn’t feel like a school lesson, that it would have edge.

MB: Some readers find a lot of dark comedy in "As I Lay Dying." How did you treat the novel’s humor in your adaptation?

JF: I think Anse is very funny in our film, even though he is a selfish prick. Tim plays him so masterfully.