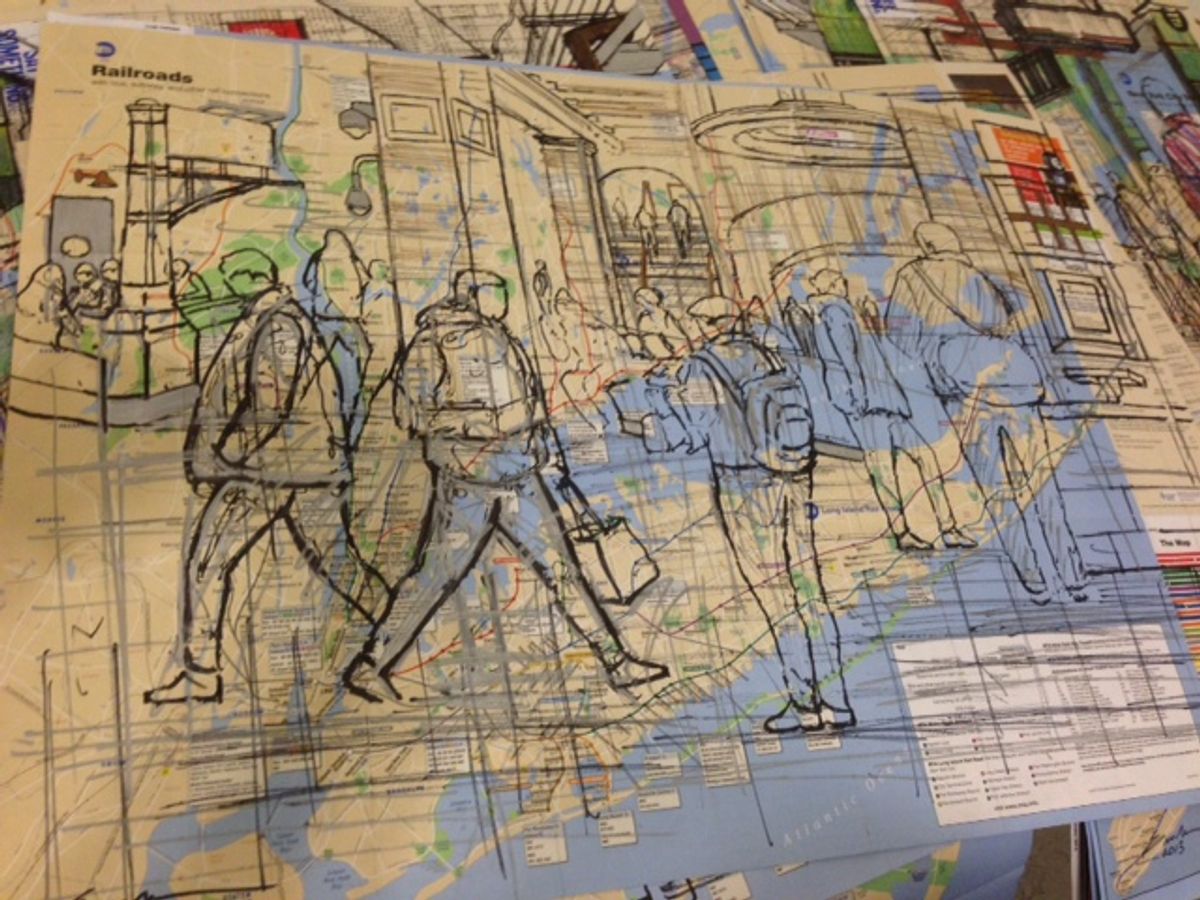 A few months ago, on a February evening in Grand Central, Brooklyn-based artist Enrico Miguel Thomas carried his drawing board a few paces away from where he had been set up, illustrating from a counter  — leaving behind a bag full of markers and a folded-up easel. After a brief moment of gathering the necessary detail on his subject, a process he characterizes as having taken no longer than five minutes, he turned to find a swarm of police officers gathering near his bags, which were less than ten feet away. After approaching the officers, claiming the bags, and identifying himself as an artist, the MTA police insisted on “clearing” his property with a K-9 bomb-sniffing dog.

Enrico Miguel Thomas, who has spent the better part of the last decade doing subway illustrations, was irked by the exchange, but his displeasure turned to shock when a single officer stayed behind and handed him a pink summons for “dis-con,” or Disorderly Conduct. The incident has since developed into a bizarre legal process, as reported by the New York Times on Monday, and yesterday Hyperallergic was able to catch up with the artist at his Red Hook studio to learn more about his practice and his relationship with the Metropolitan Transportation Authority.

A drawing of commuters in Grand Central.

This wasn’t Mr. Thomas’s first brush with MTA authorities — in 2010, he had been cited for obstructing passengers, a charge he successfully defeated in court after an eight month ordeal. More recently, in July 2012, he had been invited by the MTA’s Transit Museum to lead a workshop for kids about his work as one of the most recognizable artists working on New York’s iconic transportation infrastructure: the subway.

His works, which have previously earned him recognition in the New York Times, center around illustrations of New York and subway scenes — passengers, trains, landmarks — drawn with permanent markers on the subway maps distributed by the MTA. And so it was especially painful for Enrico Miguel Thomas to find himself again at odds with the very institution that inspires his work, and to find himself the target of what he considers to be a discriminatory attitude, both against his heritage — he’s Puerto Rican and African American — and his position as an artist.

“He’s still there,” Mr. Thomas recounted overhearing the officers telling each other after they cleared his bags. Even though he repeatedly showed them clips of his press coverage to explain his presence at Grand Central, the officers allegedly were irritated by his unwillingness to take off and decision to continue drawing after the incident. After he received the summons, he told Hyperallergic, he was so upset that he left the terminal immediately, and the piece he was working on that evening remained unfinished.

There is a legitimate policing function to the MTAPD, but repeatedly harassing a quiet, unobtrusive artist who has dedicated his work to contemplative drawings inspired by New York infrastructure seems a bit excessive. The world’s subway systems are defined by the community of buskers and assorted artists who variously pander to, document, and gently disrupt the commuter tedium.

Regardless of how one might feel about New York’s increasingly tight security apparatus, the chilling effect on artistic expression is palpable, and Enrico Miguel Thomas’s double-edged experience — his previous experience getting an MTA citation overturned and his invited participation at the Transit Museum — suggest that there is a disconnect between how the MTA presents itself in public and how it enforces, to a draconian extent, rules and regulations meant to curtail criminal behavior rather than harmless expression.

After the incident, Mr. Thomas eventually found a lawyer, and, like his previous imbroglio with the MTA, planned to fight the charges. At a Midtown Community Court hearing on May 1, the judge, Felicia Mennin, offered up a shocking rationale for the Disorderly Conduct citation — in upholding the summons, she referred not to legal precedent but the Boston Marathon bombings and 9/11 in justifying the encroachment on Thomas’s rights. Her comments spurred the New York Times coverage mentioned above, and are demonstrative of the petty fascism of Manhattan’s minor courts. Despite the decidedly prosaic legal process ahead, Thomas remains inspired: though his previous work had taken him all over the city, he has found himself increasingly drawn to Grand Central since the incident. “I’m going back nearly every day, now my Grand Central collection is staggering.”