The president gets personal at Morehouse College, as hard questions loom for black men and his presidency 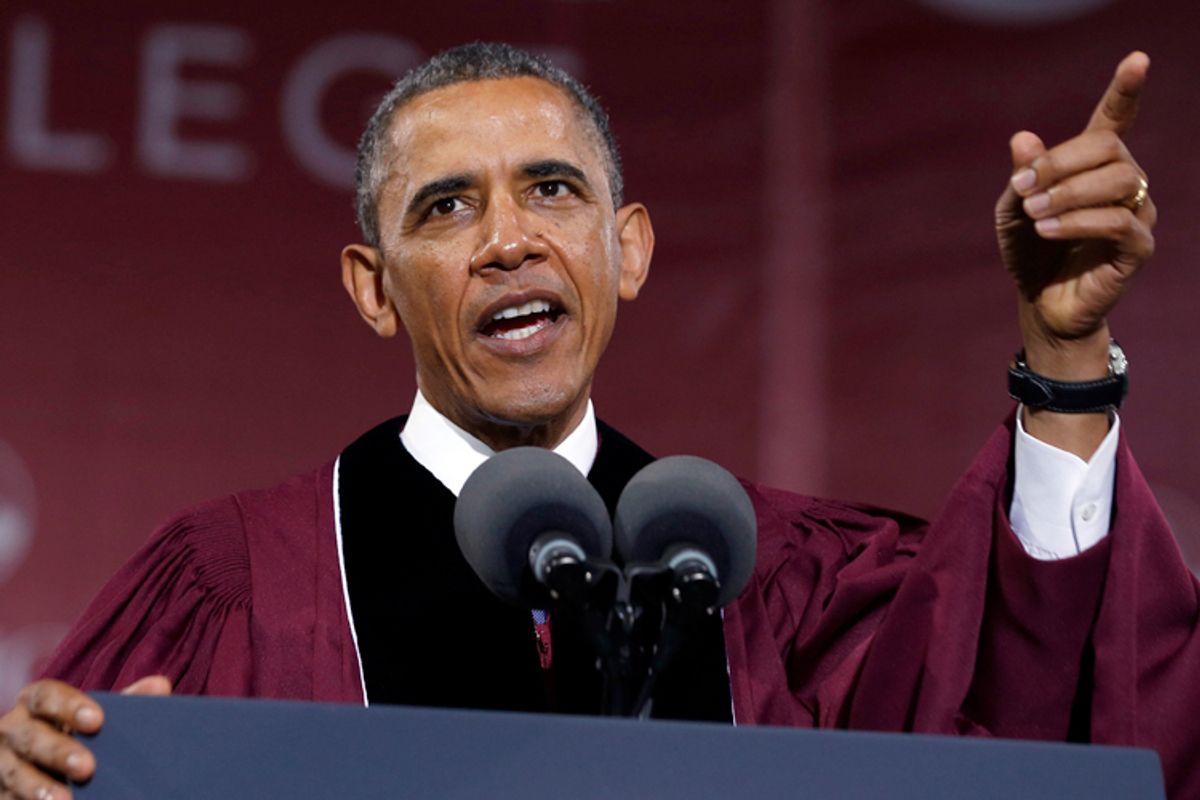 With all the distracting controversies piling on his political plate, who could blame President Obama for getting reflective at his recent commencement speech to Morehouse College graduates? Who could blame the first black president, typically a cool arbiter of analysis and restraint, for getting personal in his remarks to his receptive, brotherly crowd?

How does a black president deliver 2013 Morehouse graduates realistic advice and a pep talk at the same time? How can he optimistically send them forth — with straight talk, or a straight face?

Health. College enrollment. Work. Income. Inheritance. The racial gaps are so appalling, this black man is wary to share them. If not properly contextualized, reciting the numbers can have the reverse effect: Hearing the drumbeat of disparities often backfires, and it subconsciously confirms blacks' seeming inferiority in many white Americans’ minds. Many people privately believe these differences are rooted in blacks’ shortcomings, not in unequal opportunity or history. Indeed, white Americans believe they suffer more racial bias than blacks do, according to a study conducted by Harvard and Tufts Universities in 2011.

If anything, the president’s commencement speech to Morehouse College has an ironic whiff. The poignant nostalgia springs from the first black president addressing black men, both of whom appear to be in the twilight of their power.

As the president cannily knows, blacks are no longer America’s largest minority. How can this writer forget, soon after the president's inauguration, all the reports that announced black Americans’ declining population share, a news flash that hit some of us like an eviction notice. Hey, effective immediately, the Latinos have ousted the blacks as America’s largest minority!  Now the president is doing his best to master the politics of a quickly demographically shifting nation to achieve immigration reform. As an incidental black man.

The predicament of other black men, the president insisted to the graduates, is not just a result of technological change and globalization. He put partial blame at his brothers’ own feet.

“In today’s hyper-connected, hyper-competitive world, with millions of young people from China and India and Brazil, many of whom started with a whole lot less than all of you did, all of them entering the global workforce alongside you, nobody is going to give you anything you haven’t earned,” said the president. “Nobody cares how tough your upbringing was. Nobody cares if you suffered some discrimination.”

As Barack Obama winds down an impressive two terms in office, the historic novelty, from a racial milestone, is now obsolete. Black “firsts” are becoming obsolete. So the idea of a “black president” is obsolete. The president surely understands the quaintness and nostalgia of this commencement occasion, with its creaking racial symbolism.

This recession is throwing non–college educated black men under the bus. With or without a black president. Is it also putting a final nail in their coffin, as it were? Leaving us behind? The dark backdrop to the president’s address is black men’s viability in a 21st century world.

Images of Forrest Whitaker in "Ghost Dog" haunt me. As the president will soon take his exit from office, black men seem to be vanishing from participation and sight -- declining as a collective political and economic force, vanishing from participation and sight in all the places that matter in America: the office, the voting booth, the trading floor and the college commencement hall.