While DC fixates on whether Obama is worse than Nixon, polls show the public likes the president more and more 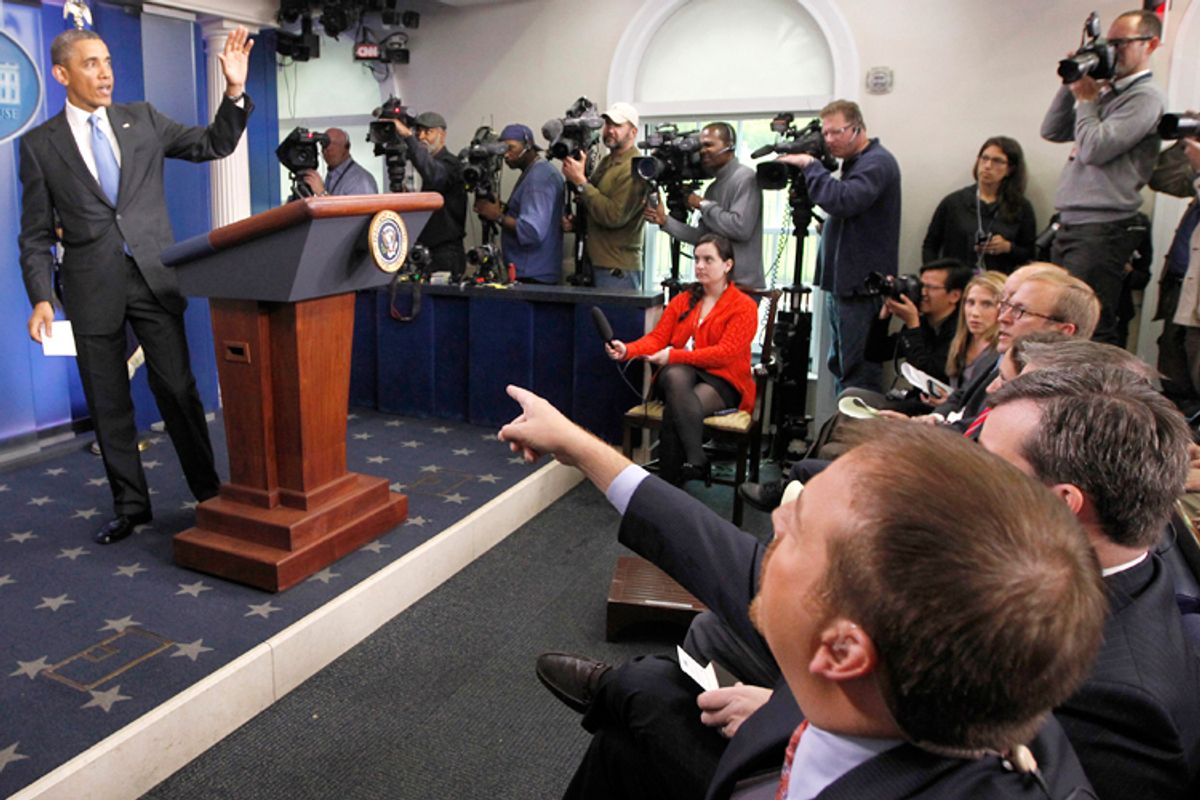 The great Charles Pierce may deride it as “Tiger Beat on the Potomac,” but sometimes I’m damn grateful we have Politico. Good reporters like Maggie Haberman and Ken Vogel aside, even Politico’s trademark triviality sometimes provides an important political service.

Case in point: Its hilarious “D.C. turns on Obama” piece last week, which marked the crest of Scandalmania and also helped explain polls that show Americans trust President Obama’s version of events when it comes to the Benghazi and IRS controversies. I expected polls to show people believe the president on these issues, but I’ll admit I was surprised to see his approval rating actually ticked up a bit despite the constant drumbeat of scandal. But it did -- and that should force the media to look in the mirror, though it probably won’t.

“The town is turning on President Obama — and this is very bad news for this White House,” the story by Politico’s Mike Allen and Jim Vandehai began breathlessly. Of course, “the town” -- or as Digby calls it, “the village” -- has turned on presidents before, most notably President Clinton. But the American people don’t live in “the town,” and they responded to the revving up of the Beltway scandal machine by overwhelmingly reelecting Clinton, giving him higher approval marks even after impeachment and penalizing Republicans in the 1998 midterm elections.

It’s too early to say whether Obama will enjoy the same insulation from media-hyped “scandal” that Clinton did. Benghazi has effectively fizzed, but it’s possible more details will emerge about the IRS’s targeting of Tea Party groups for extra scrutiny before approving their tax-exempt status. On Monday, reporters were trying to gin up outrage for the president not knowing about the IRS audit by the Inspector General, even though the White House counsel learned about it a month ago, and so did some of Obama’s staff.

Once again, though, it may be that the system actually worked: Pulling the president into the loop on an investigation into what could represent political corruption would have been wrong. At worst, you can argue that Obama should have been told before he found out via news reports, but if that’s as bad as the evidence against him gets, this too shall pass. (The one new detail to emerge Monday that ought to matter more than anything in the Benghazi/IRS messes, that the Department of Justice targeted Fox News reporter James Rosen, is getting much less attention.)

The GOP tipped its weak hand on the IRS scandal over the weekend, when top Republicans were forced to complain about a White House “culture of intimidation” rather than point to evidence that the White House directed (or even knew about) the Tea Party targeting. Not only Senate Minority Leader Mitch McConnell but Texas Sen. John Cornyn used the very same “culture of intimidation” talking points. The creative Peggy Noonan came up with the memorable notion that the GOP doesn’t need (and won’t find any) proof that the White House directed the IRS mess, because Obama was using a “dog whistle” to sic his pack of political hounds on his enemies.

The good news is that Sunday show hosts demonstrated somewhat more spine than usual in pushing back against the new GOP spin. When "Meet the Press’s" David Gregory asked McConnell for “evidence” of the “culture of intimidation,” the Senate leader stumbled. “I-I don’t think we know what the facts are,” prompting Gregory to retort, “But that hasn’t stopped you from accusing.”

MSNBC's Chris Hayes has taken to calling the past 10 days of media frenzy “Scandalgate,” making the point that the real scandal here is journalists conflating three very different issues -- Benghazi, the IRS and the DOJ’s targeting journalists in its leak investigations -- into one big, undifferentiated mass of … well, they don’t know what, except it’s gotta spell trouble for the president.

Some of this reminds me of how the right-wing echo chamber talked itself into the certainty of a Mitt Romney victory -- Peggy Noonan felt the "vibrations;" Karl Rove thought he'd fixed Ohio -- only to be shocked when their man went down to the unpopular, corrupt, incompetent black guy in the White House. Even much of the media predicted a closer race than it was. Outside of the Republican base, most Americans like and trust the president, and that remains an asset even during times of real or pseudo-scandal.

What’s most disturbing, though, is that the paranoia and anger of the Tea Party base, as echoed by an intimidated, primary-averse GOP leadership, are taken seriously by Beltway journalists, who then lose their own ability to distinguish fact from right-wing fantasy. I keep thinking scandal fever has broken, but it’s not over yet. Still, these latest polls may make a few journalists nervous about insisting that they speak for the American people, and the American people are angry about scandals. They’re not, yet, and the Beltway’s insistence that the opposite is true just shows how “the town” doesn’t know much about the rest of the country.