The truth in Kanye's anti-prison rap 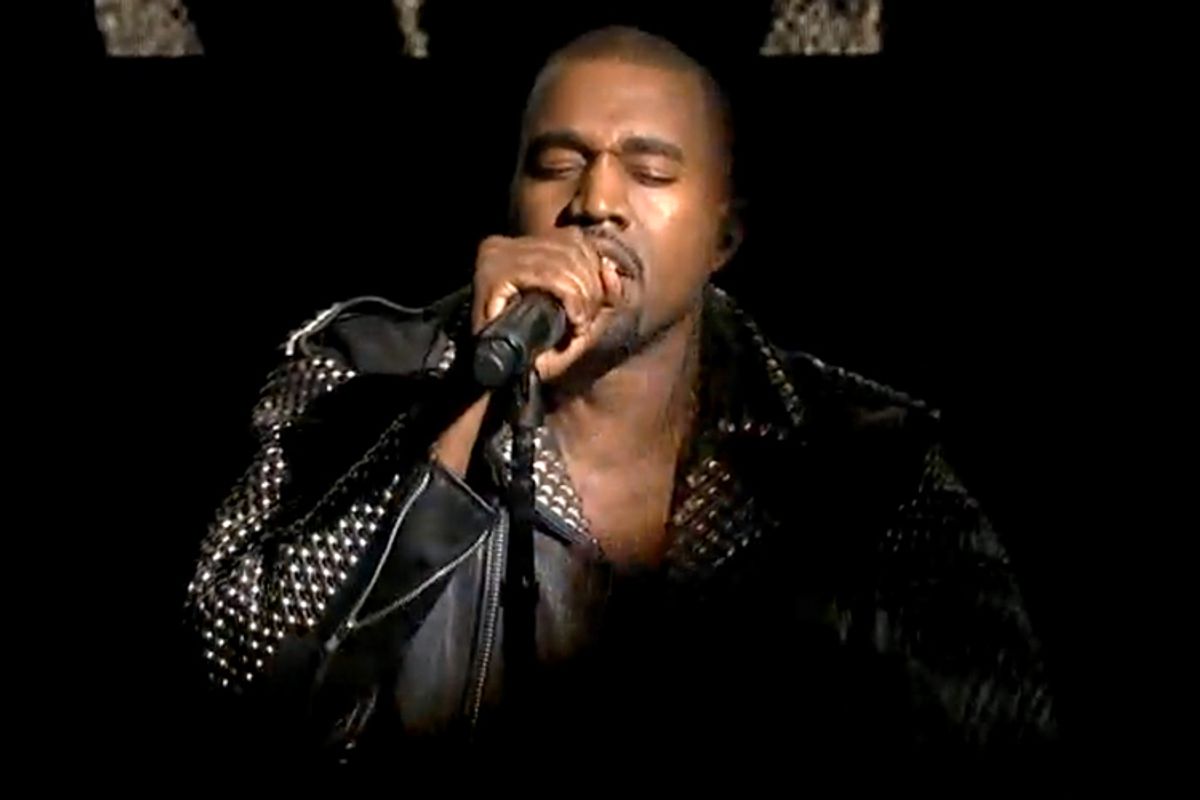 The backdrop to Kanye West's "Saturday Night Live" performance was a lie. Projected behind the rapper, as he let loose with two rage-filled and politically fueled tracks, were the words "Not For Sale."

Yeezy wouldn't have graced the set if he wasn't hawking a soon-to-be released LP. But his incendiary performance was peppered with damning truths: Angry and pointed condemnations of institutional racism and the prison industrial complex, which disproportionately jails young men of color to fill state budget holes and enrich private corporations.

In the final verse of "New Slaves," a track released Friday with the coordinated projection of a video on 66 buildings worldwide, and the second performance in his "SNL" set, West raps:

Condensed and reduced to flow in rhyming verse, West's lyrics smack of the conspiratorial. But he is correct: The War on Drugs, abetted by and fueling the private prison industry, currently serves to incarcerate hundreds of thousands of black men in the United States, who provide dirt-cheap labor. Various industries -- from call centers to weapons manufacturers to retail companies -- rely on prison labor. Private prisons pay inmate workers as little as 25 cents an hour; prisoners who refuse to work are regularly held in isolation. These are the de facto "new slaves" of the prison industrial complex. The CCA (the Corrections Corp of America) is one of two major private prison corporations (along with the GEO Group) that share in a market worth $70 billion.

And West's implication that the CCA and the DEA are "tryn'a" lock up black people, leaving racist intentionality aside, is supported by troubling statistics. While the entire U.S. population is only 13.6 percent black, 40 percent of its vast prison population (over 2.5 million) is black. In 2010, black males were incarcerated at the rate of 4,347 inmates per 100,000 U.S. residents of the same race and gender, compared to 678 inmates per 100,000 for white males. The disparities are striking, especially when the majority of those held in U.S. prisons are guilty of minor drug offenses. This brings us to Kanye's reference to the DEA.

[W]ith an eye toward increasing its bottom line, CCA has floated a proposal to prison officials in 48 states offering to buy and manage public prisons at a substantial cost savings to the states. In exchange, and here's the kicker, the prisons would have to contain at least 1,000 beds and states would have agree to maintain a 90 percent occupancy rate in the privately run prisons for at least 20 years. The problem with this scenario, as Roger Werholtz, former Kansas secretary of corrections, recognizes is that while states may be tempted by the quick infusion of cash, they "would be obligated to maintain these (occupancy) rates and subtle pressure would be applied to make sentencing laws more severe with a clear intent to drive up the population." Unfortunately, that's exactly what has happened. Among the laws aimed at increasing the prison population and growing the profit margins of special interest corporations like CCA are three-strike laws (mandating sentences of 25 years to life for multiple felony convictions) and "truth-in-sentencing" legislation (mandating that those sentenced to prison serve most or all of their time).

Or, as Yeezy put it: "See that's that private owned prison/Get your piece today."