Why was CEO Tim Cook standing trial for "crimes" all his peers have committed? Because everyone loves their iPhones 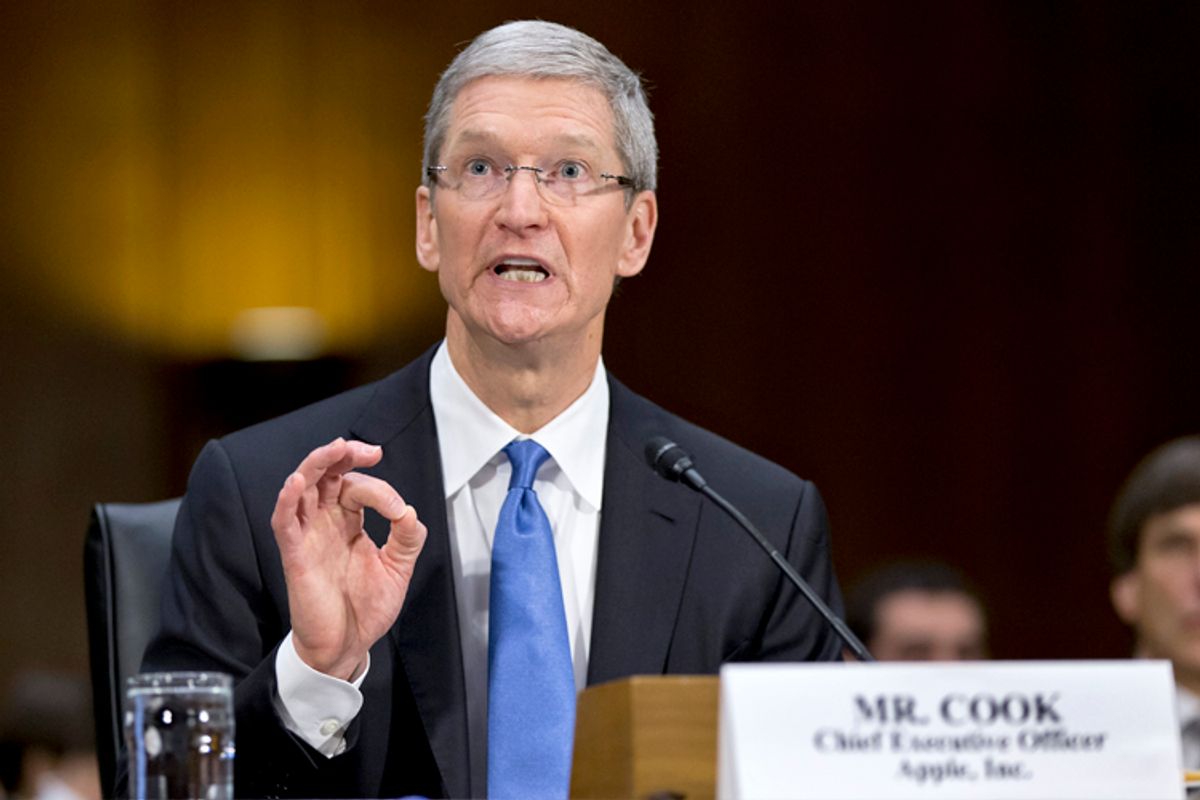 It's causing me heartburn to admit this out loud, but when I saw the first tweet reporting Rand Paul's declaration that Congress was bullying Apple and forcing it to sit through a "show trial" -- as if CEO Tim Cook was a member of the Bolshevik old guard about to be purged by Joseph Stalin on bogus conspiracy charges -- I found myself inclined to agree with the Kentucky senator.

I don't condone Apple's tax-avoidance schemes, but the company is hardly alone in taking advantage of loopholes in U.S and Irish tax law. The Wikipedia page that details the two key strategies employed by Apple, the Double Irish and Dutch Sandwich, lists 12 other major U.S. corporations that are pulling the same flim-flam. Among them are Apple's tech sector colleagues -- Google, Microsoft, Oracle, Facebook and Adobe Systems -- along with General Electric, Pfizer, Johnson & Johnson and Starbucks.

All these companies are equally guilty of maximizing their profits by taking advantage of badly written tax laws. Several news reports have suggested that Apple was one of the "pioneers" in executing this strategy, so maybe this is a case of "everyone's equal, but some companies are more equal than others." But even if so, Paul is still absolutely right: The first place Congress should be looking is in the mirror. If we want our corporations to pay more taxes, we need to change the laws. Sen. John McCain, R-Ariz., thought he was being funny when he said that Apple's tax strategy had given new meaning to the slogan "Think Different," but what he really should have said was that it was time for Congress to think different.

Of course, Senator Carl Levin, D-Mich., the chairman of Senate homeland security and governmental affairs subcommittee, knows this. A former lawyer who knows how to cross-examine a hostile witness, he's always struck me as one of the sharper intellects in the Senate. He chose to make Apple the center of a circus for obvious strategic reasons. The best way to get bang for your publicity buck is with star power. Who even knows who the CEO of Johnson & Johnson is? (Alex Gorky.) For better or worse, people care about Apple. Every web journalist knows this: Stick "Apple" in the headline, and people will click.

So no wonder Rand Paul is mad. Because Rand Paul's preferred outcome is that corporations pay no taxes at all. But judging by how much press Tim Cook's appearance in Washington is generating, and how many angry tweets about corporate tax avoidance are zipping through the ether, Senator Levin hit the bullseye with his show trial. Tim Cook may have laughed his way through the entire hearing, but I don't think most Americans think the current corporate taxation status quo is all that funny. Maybe we need a good purge.