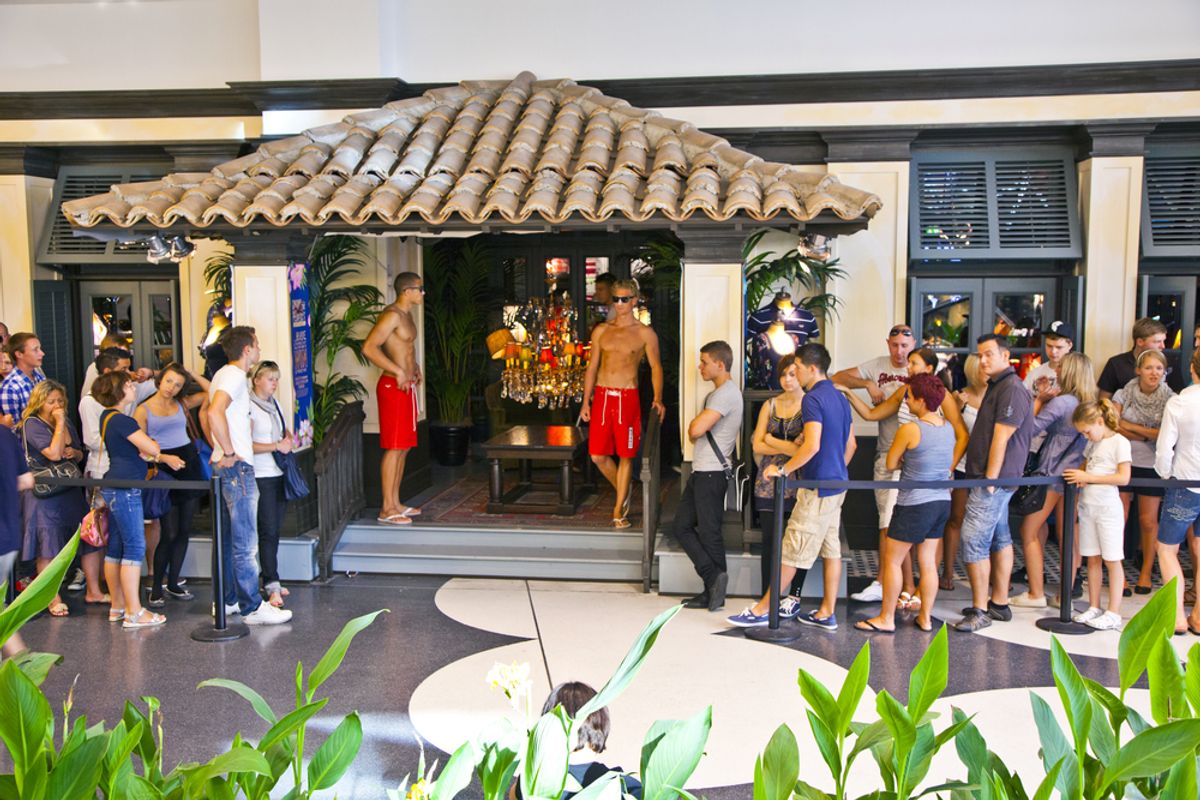 A Denver-based federal judge has ruled that the entrances to hundreds of Hollister stores nationwide violate the Americans with Disabilities Act.

“They’re digging their heels in. They’ve been digging in their heels all the way,” said Julie Farrar, a named plaintiff in the four-year legal battle. The case grew from complaints filed against two stores in Colorado. It’s now a class-action suit targeting 248 Hollister stores around the country.

Hollister, like all of the Abercrombie brands, markets its clothing as a lifestyle. It sells a sort of gestalt approach to pre-teen and teenage existence. The stores feature surf-speak labeling. Girls find their clothes in the “Bettys” department. Boys find theirs in the “Dudes” department. The stores are fashioned in malls everywhere to look like surf shacks. They’re not weathered. The air isn’t salted. There’s no odd guy trolling out front with metal detectors. But they do feature steps leading up to what resembles a front porch.

According to a deposition of a company executive, the raised entrances were designed to create “an entry to a house in Southern California that you would walk up onto the porch or walk down into the porch, to enter, like you would do at a beach house.”

Hollister is a “fantasy of Southern California,” according to a 2013 report to shareholders. “It’s all about hot lifeguards and beautiful beaches. … Young and fun, with a sense of humor, Hollister never takes itself too seriously. Hollister’s laidback lifestyle and All-American image is timeless and effortlessly cool.”

Farrar wouldn’t likely describe anything about the Hollister experience as “effortless.”

A Denver policy analyst, Farrar was nudged by her 12-year-old daughter to wade into the retail “fantasy of Southern California.” She was willing, in other words, to move from small-wave to big-wave, even epic, price surfing, from $12.00 Target shirts, for example, to $39.50 Hollister “Huntington Beach Tops.”

But Farrar’s wheelchair couldn’t make it up the steps of the store at the Orchard Town Center in Westminster. That was a problem for Farrar, and now it’s a problem for Hollister.

Hollister has argued that it complies with the law because the stores include side doors disguised as shuttered windows that are wheelchair-accessible. Plaintiffs say those doors often are blocked with tables stacked with merchandise.

In any case, Farrar had no intention of using a side entrance to shell out big bucks for her tween’s wardrobe.

“I would never go through a side door. It’s not something I would do. I’m philosophically opposed to that,” says Farrar, 45, who was born without a sacrum — the triangular bone at the bottom of the spine — and who started using a wheelchair when she was 12. She said that in school, using a wheelchair meant she was effectively segregated from other students. She remembers her family being asked to leave restaurants, movie theaters, and shops because she “was considered a fire and safety hazard.”

Farrar is one of the original plaintiffs in the suit filed in 2009 by the Colorado Cross-Disability Coalition over Hollister’s then two Colorado stores. The court ruled in 2011 that both stores — one at Park Meadows Mall and the other at Orchard Town Center — violated the ADA. The Orchard Town Center store since has closed. The steps in front of Hollister at Park Meadows Mall remain in place two years after Judge Daniel ruled them a violation of the law. Two newer stores, in Aurora and at Flatiron Crossing, are wheelchair accessible.

In 2012, the case grew into the class-action suit that targets 248 Hollister stores in the U.S. that feature the faux porch steps as a main entrance. That’s slightly more than half of the 483 Hollister stores nationwide.

The U.S. Justice Department has also weighed in on the case, noting that the Hollister stores were built long after the ADA was enacted and that the entrances violated both the spirit and letter of the law. Justice officials criticized the company for relegating people in wheelchairs to separate side entrances.

One of the chief goals of the ADA was integration. Excluding people like Farrar from the main entrance -- and the Hollister surf shack porches -- is no more permissible than it would be to exclude people based on race, plaintiff say.

In March, Judge Daniel ruled in favor of the plaintiffs.

“Because the Hollister stores with Raised Porch Entrances are in violation of section 12183(a), an injunction is mandatory to remedy the violation,” he wrote.

Daniel ordered the company to work with disability rights activists on wording an injunction that would provide accessibility by using one of three options at any given store.

One would be to flatten out the entrance and remove the steps. Another would be to provide wheelchair-accessible ramps. The third option is more complicated.

The company’s lawyers argued in court that the stepped porches aren’t discriminatory because they’re visual displays that all customers — even disabled ones — can enjoy. But if that’s the case, argued the plaintiffs, then Hollister should use the porches strictly as display windows and require all customers to enter through the side doors.

Neither the Abercrombie & Fitch public relations department nor a member of its defense team responded to The Independent's inquiries about the case.

More than two months after Judge Daniels’ order, there has been no agreement on the injunction and the plaintiffs are growing impatient.

Farrar’s frustration stems less from her desire to buy her daughter a pair of “Cheeky” swim bottoms or $59 “high-rise short shorts” than from a need, she said, “for the company to do the right thing.”

“These stores are designed to look shuttered and hidden, as if to keep out the riffraff,” she said. “I want people to know that, as a society, we have evolved over the past 25 years. Despite the fact that [Hollister] market[s] beauty and athleticism as a stereotype, the reality is they still need the rest of us people who are short, chubby and maybe with acne and wheelchairs.”

Or maybe not, says Paco Underhill, an environmental psychologist and author of “Why We Buy: The Science of Shopping.”

“If you don’t know what goes on behind the windows of Hollister, you’re probably not going to want to shop there.” There is a tribalism about the shopping experience, he says, “that’s not just about the acquisition of goods but a souvenir of the experience.” Climbing Hollister’s steps is typical of that kind of experiential marketing.

The corporation is unabashed about its exclusionary efforts. In 2006, Abercrombie CEO Mike Jeffries told Salon that his stores specifically don’t market to teens who are overweight, unattractive or outliers among their peers.

“Candidly, we go after the cool kids. We go after the attractive all-American kid with a great attitude and a lot of friends. A lot of people don’t belong [in our clothes], and they can’t belong. Are we exclusionary? Absolutely. Those companies that are in trouble are trying to target everybody: young, old, fat, skinny. But then you become totally vanilla. You don’t alienate anybody, but you don’t excite anybody, either,” he said.

The clothing giant also made headlines in 2009 when an employee said she was moved from a sales position on the floor to one behind the scenes in the stockroom because her prosthetic arm didn’t comply with the company’s aesthetic standards.

Underhill, whose company Envirosell consults with businesses on matters such as “store planning,” “signage and display” and “windows,” finds it telling that disability-rights advocates targeted Hollister rather than what he said is “a long list of other retailers who have steps at their entrances.” If Hollister’s beach culture is, as he describes, a kind of tribe, disabled customers don’t feel like members.

“It’s no accident that they’re chasing down a surf brand chain and not some other company,” he says. “In my view, that’s a capricious application of the law.”