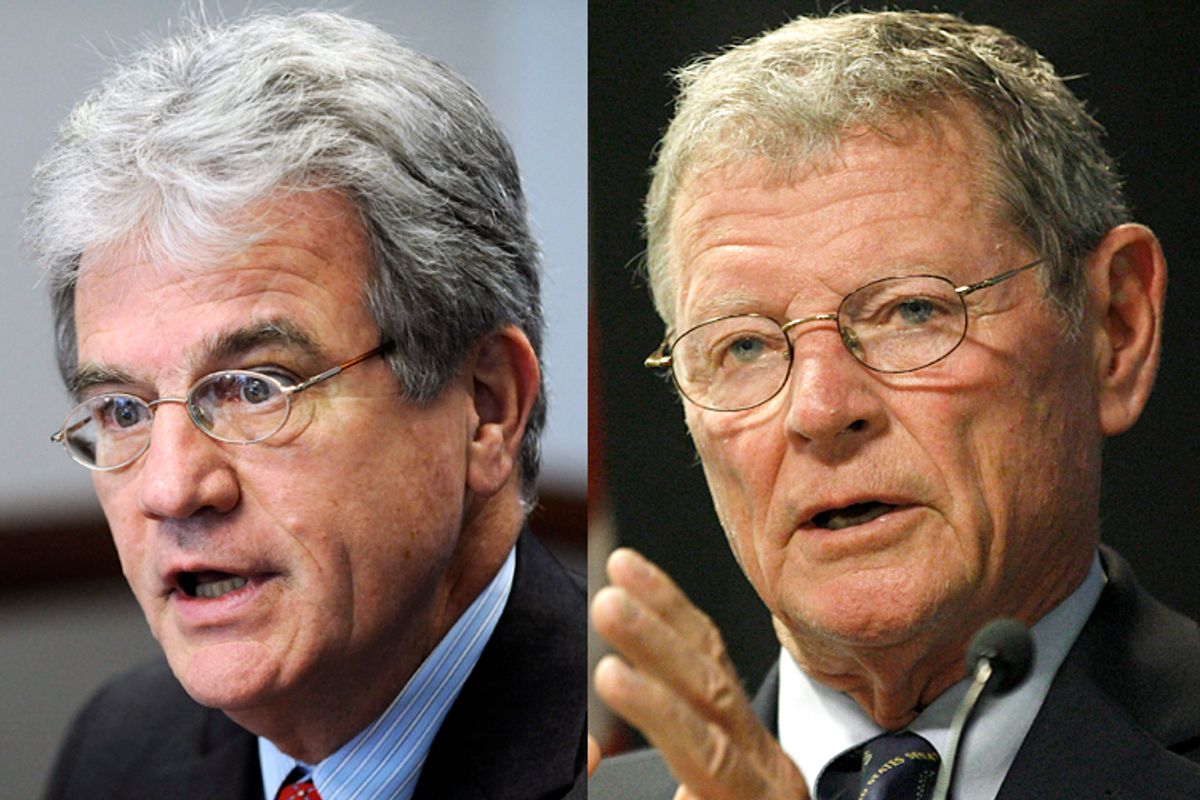 Just a week ago, Oklahoma Sen. James Inhofe suggested that President Obama might be impeached over the Benghazi non-scandal. Now, Inhofe must watch as Obama declares Inhofe's state a disaster area and promises Oklahomans “all the resources they need at their disposal.”

Inhofe, of course, believes his state deserves those resources, even though he voted down aid to Hurricane Sandy victims. On MSNBC, Chris Jansing confronted Inhofe about his calling the Sandy aid bill a “slush fund,” and the brazen right-winger insisted the two issues shouldn’t be linked.

“Let’s look at that, that was totally different,” Inhofe told Jansing. “They were getting things — for instance that was supposed to be in New Jersey, they had things in the Virgin Islands, they were fixing roads there, they were putting roofs on houses in Washington, D.C.; everyone was getting in and exploiting the tragedy taking place. That won’t happen in Oklahoma.”

Inhofe’s answer is too dishonest to fully parse. First of all, there was Sandy damage way beyond New Jersey, including in the Caribbean and in Washington, D.C., too. And Inhofe had different objections to the Sandy bill at the time. In a rambling, hard-to-follow Senate floor speech blocking Sandy aid last December, the Oklahoma conservative objected to the bill’s timing -- “There’s always a lot of theater right before Christmas time … We shouldn’t be talking about it right before Christmas” -- even though it was already going on two months since the storm ravaged the East Coast.

Inhofe was also exercised by the fact that the Sandy bill included what he said was $28 billion for future disasters. But the climate-change denier was particularly outraged that the bill included $3.5 billion to deal with what he called “global warming,” which led to a long rant against cap-and-trade legislation, and then his floor speech unraveled. (Interestingly, Inhofe’s own press operation put the incoherent speech up on YouTube, as though it was a proud moment for the senator.)

Oklahoma’s other GOP senator, Tom Coburn, brags that he’s going to seek tornado relief -- but insist that the funding is “offset” by other cuts to the federal budget. Coburn is proud that he’s being consistent by placing the same conditions on disaster aid to his own state as he’s demanded elsewhere. Consistent, maybe -- but also fundamentally cruel.

Especially in the wake of the sequester cuts, the notion that the federal budget is larded with easily eliminated spending is ludicrous. Would Coburn like to see more kids thrown out of Head Start? More seniors losing Meals on Wheels? The federal deficit is shrinking faster than at any time since just after World War II, but Coburn is going to insist that someone, somewhere, must lose their federal help so Oklahoma can get it instead.

There’s something so typical about today’s GOP in the way Inhofe can dismiss comparisons between tornado aid and Sandy aid while Coburn grandstands for his long-term demand that new spending, even on disaster relief, must be “offset” by cuts elsewhere. Meanwhile, the notion that a new disaster relief bill should include funding to cope with future disasters isn’t lauded as common sense, it’s derided as pork. Like Inhofe, Coburn objected to the Sandy bill’s including funding for future disaster relief. (It should be noted that Moore, Okla., Rep. Tom Cole, also a Republican, voted for the Sandy aid bill.)

Just as modern conservatism helped create categories of “deserving” and “undeserving” poor, we now apparently have deserving and undeserving disasters. When tragedy strikes, most Americans tend to want to pull together, but many Republicans look to pull us apart, placing their own constituents’ needs above everyone else’s.