Is abortion about to doom Republicans again?

With arch-conservative nominees in Virginia, a test is emerging -- and an Akin moment may not be far behind 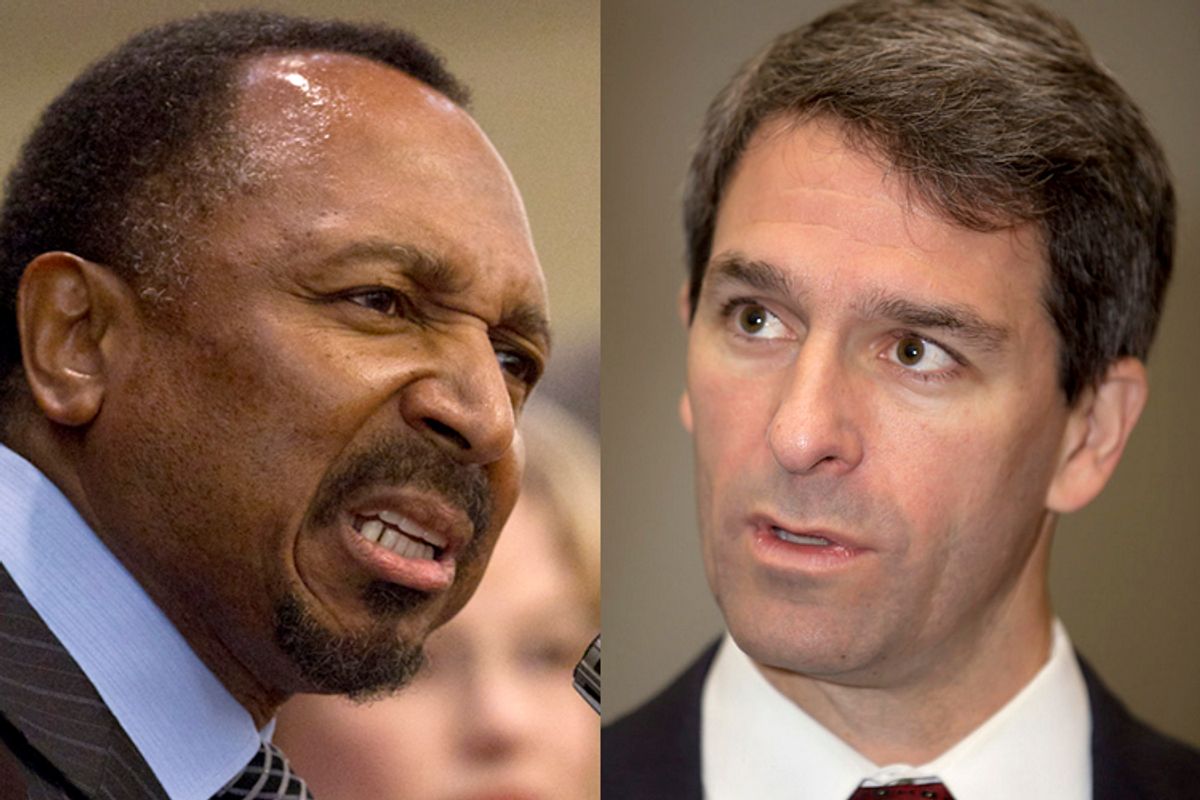 Recently, I asked Congresswoman Eleanor Holmes Norton, one of the most fiercely pro-choice members of Congress, why she thought the House of Representatives had been so muted this year in its introduction of anti-abortion and anti–Planned Parenthood bills. “It pays to fight,” she said.

The implication was that House Republicans had decided that the lesson of the bruising 2012 election was to back off on anything that Democrats could tar as a war on women. (In the meantime, their allies in the states could push through real changes in abortion and contraception access, with very few political barriers.) But that fragile detente may be over, both nationally and in this year’s key state races. The question is whether it's a battle Republicans even want to fight.

Norton’s own home turf, the District of Columbia, is often the ground for federal abortion policy grandstanding, as it was when Rep. Trent Franks introduced a 20-week abortion ban for women in the District. (That bill got a majority of votes on the floor, but was set up to fail by leadership requiring a two-thirds majority). Inspired by the national spotlight on Kermit Gosnell, Franks is back this week with a new, super-charged version: Banning abortion at 20 weeks, about a month before viability, for the entire country.

As Emma Dumain points out at Roll Call, by this time last year, the so-called No Taxpayer Funding for Abortion Act (note: there isn’t any) had already passed the House. But now, House leaders are suspiciously silent. “Republican leaders might want to spare some members the unsavory prospect of taking a vote — and having a lengthy debate on a controversial policy position that has no chance of getting signed into law in this Congress,” Dumain writes, what with a Democratic-controlled Senate and a Democratic president. And Franks basically came out and acknowledged a rift: “There was a difference of opinion among some members about whether this should be for D.C. or nationwide.”

That's bad news for the Susan B. Anthony List, the group devoted to electing anti-abortion women and men -- and subject of a new report from the American Bridge Project and NARAL Pro-Choice America. They hired their first lobbyist in 2011 to push defunding Planned Parenthood only to see those votes come back to haunt many members and to watch Barack Obama embrace Planned Parenthood as a road to victory. The other main takeaway from the report is the prodigious losing streak the organization and its candidates have been on, in evidence when the main "bright spots" they could recently tout were the victories of Michele Bachmann and Steve King, as well as a single anti-abortion female Senator (the second in total), Deb Fischer of Nebraska. Instead, abortion and contraception were used as a wedge issue not to beat Democrats but to elect them, nationally and in Missouri, Indiana, and, to a limited extent, Massachusetts and North Dakota. (The Susan B. Anthony List also sank money into a predictable loser, Wendy Long in New York, running against Kirsten Gillibrand.)

The group's takeaway is not that those politicians lost because their views on women's bodies were unpopular but because they just didn't express them in the right way. "SBA List does not accept the dire predictions promoted by hostile media and pro-abortion advocates that the pro-life message is a losing message," said SBA's president Marjorie Dannenfelser. She also said of the 2012 elections, "Republicans had the truce, Obama had launched a war over abortion and on the Life issue, therefore he got to completely define what that issue was -- and what is it? Rape."

Both parties are hoping the governor's race in Virginia will set the tone for everything that comes next. SBA jumped into the race early, targeting Terry McAuliffe and writing in its own business plan that the state is "a proving ground for our messaging training and voter mobilization effort," before a far bigger batch of congressional elections in 2014."What we make of this opportunity might well be forecast by the progress we make in messaging in Virginia’s off-year elections.”

But the party establishment seems to have different ideas for the perennially contested state. As Jamelle Bouie puts it, "Given their demographic challenges, Democrats — and Terry McAuliffe in particular — have to convince Virginians that the GOP is too extreme to trust. With [Ken] Cuccinelli now tied to someone further to the right than he is, that task has become much, much easier." He was talking about E.W. Jackson, now the Republican nominee for lieutenant governor. You know, the guy who said, “Planned Parenthood has been far more lethal to black lives than the KKK ever was." Not to be confused with Mark Obenshain, the Republican nominee for attorney general, who previously introduced a bill that would criminalize women who didn't report their miscarriages to the government.

That's before we even get to the fact that Cuccinelli himself was instrumental in the notorious transvaginal ultrasound bill proposed (and partially passed) in Virginia last year, in addition to championing legislation intended to shut down the state's abortion clinics. Even if some Republicans do want reproductive rights issues to go away, they're in too deep and it's probably too late.