Reports are inconclusive, but that hasn't stopped the press from perpetuating its favorite disaster scare story 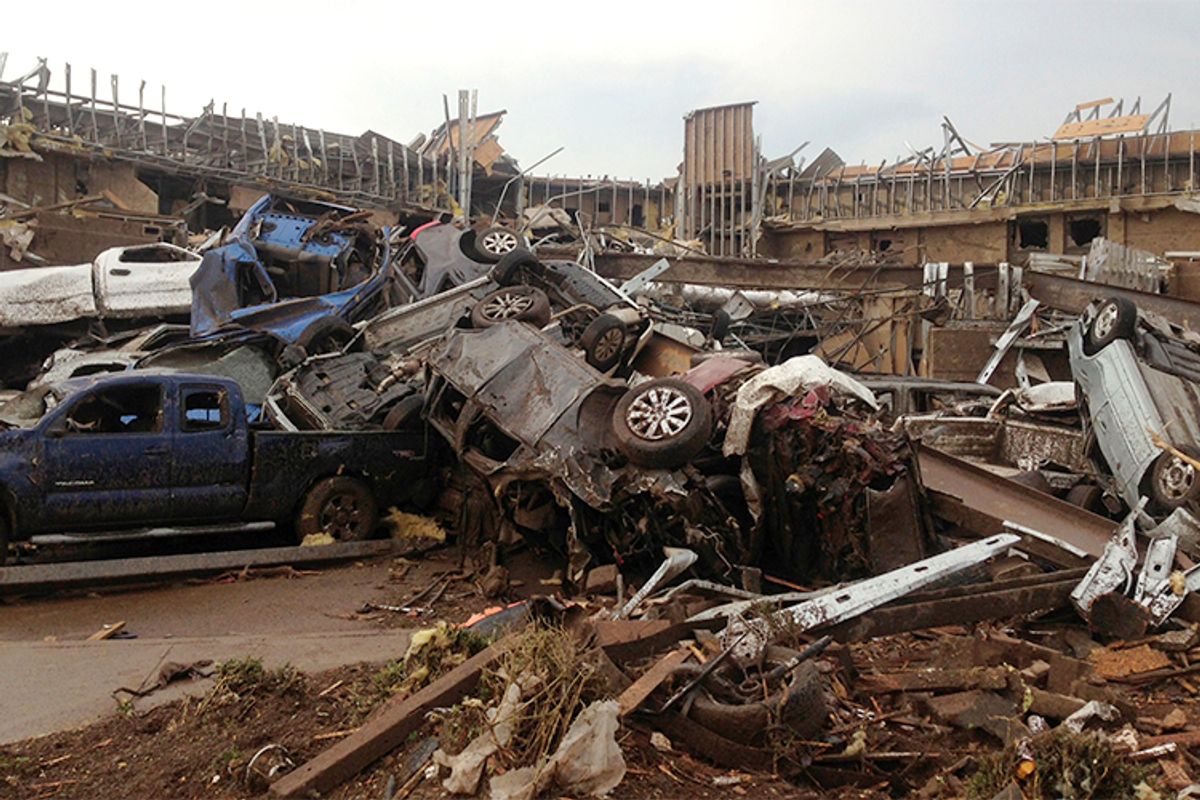 Overturned cars are seen after a huge tornado touched down in the town of Moore, near Oklahoma City, Oklahoma May 20, 2013. (Reuters)
--

This piece originally appeared on ochbergsociety.org.

Looting. Almost immediately, the word creeps into the conversation.

It’s a word we need to be careful with.

Less than 24 hours after the tornado struck Moore, Okla., looting became part of the story. The word, and outrage about it, are all over Twitter. Most tweets don’t name the source for the rumor. Here’s the most trustworthy tweet I saw early this morning:

KFOR reporter says docs told her of looting at hospital damaged by the Moore Tornado. — Andy Carvin (@acarvin) May 20, 2013

The tweet is from Andy Carvin, NPR’s senior strategist. I saw it because it was retweeted by Rukmini Callimachi, a terrific AP staffer based in West Africa.

Which is to say, I trust Callimachi, who brought me this information from a source who also seems reputable. When you’re getting your news from Twitter, trust is everything. On the other hand, this also isn’t that much information. Trustworthy as Carvin seems, as best I can tell, he’s a guy who was watching TV or read somewhere about what was broadcast on TV, and he’s tweeting what another reporter said that someone told her.

This wouldn’t be sourced well enough to make the print edition of many newspapers, but of course Twitter doesn’t work like newspapers -- except in one important respect. Twitter increasingly shapes the narrative as stories develop. Search for the word “loot” and watch the results stack high. Many of those hits aren’t about this disaster, but those that are about Oklahoma are mostly from people outraged to have heard that there was looting.

Most of the looting tweets, that is, are reactive, and most of those reacting likely don’t know where the information -- or is it rumor? -- actually came from. But it doesn’t matter: They believe that it happened, and the story moves into its next phase, in which looting reports are a shared assumption.

But … was there actually looting? The truth is, we don’t really know yet. And if what we’ve heard is true, then here’s what we know: We know that in a city of roughly 55,000 people devastated by the twister, someone (or ones) left or attempted to leave one hospital with one or more computers. Even then, we don’t know who that person was, or whether they were, in fact, stealing. But what it looks like, on Twitter, is a city gone mad with cynical opportunism.

This story, it turns out, is a pattern: As Jonathan Katz writes in our latest issue of Acts of Witness, a magazine I edit for the Ochberg Society for Trauma Journalism, it’s awfully easy to confuse people going back to their homes, their offices, or their stores and taking what belongs to them, or what they want to protect, with “looting.”

After Katrina, according to a 2006 Tufts University study, false reports of looting interfered with disaster response and shaped an environment in which exaggerated reports of crime flourished. Of Katrina, Katz remembers:

My colleagues at AP came under fire for a photo caption describing a black storm survivor submerged in water “after looting a grocery store” while an Agence France-Presse photo described white survivors, in a superficially identical moment, “after finding bread and soda from a local grocery store.” An AP spokesman explained our caption: “[The photographer] saw the person go into the shop and take the goods, and that’s why he wrote ‘looting’ in the caption.”

The same story pattern emerged after the earthquake in Haiti, and at a smaller scale, in New York after Hurricane Sandy. And it began with fears about and allegations of looting — many of which, upon closer examination at a less piqued moment, turned out not to be true.

I’m not saying that there’s not looting in Oklahoma. I’m saying that the information we have isn’t conclusive. In moments of crisis like this one, when narratives become a way of managing chaos, we have to be careful with inconclusive information, and with hot-button words like “looting.”