The sweet, sure to be short-lived "The Goodwin Games"

Think of Fox's new show as a charming sitcom mini-series 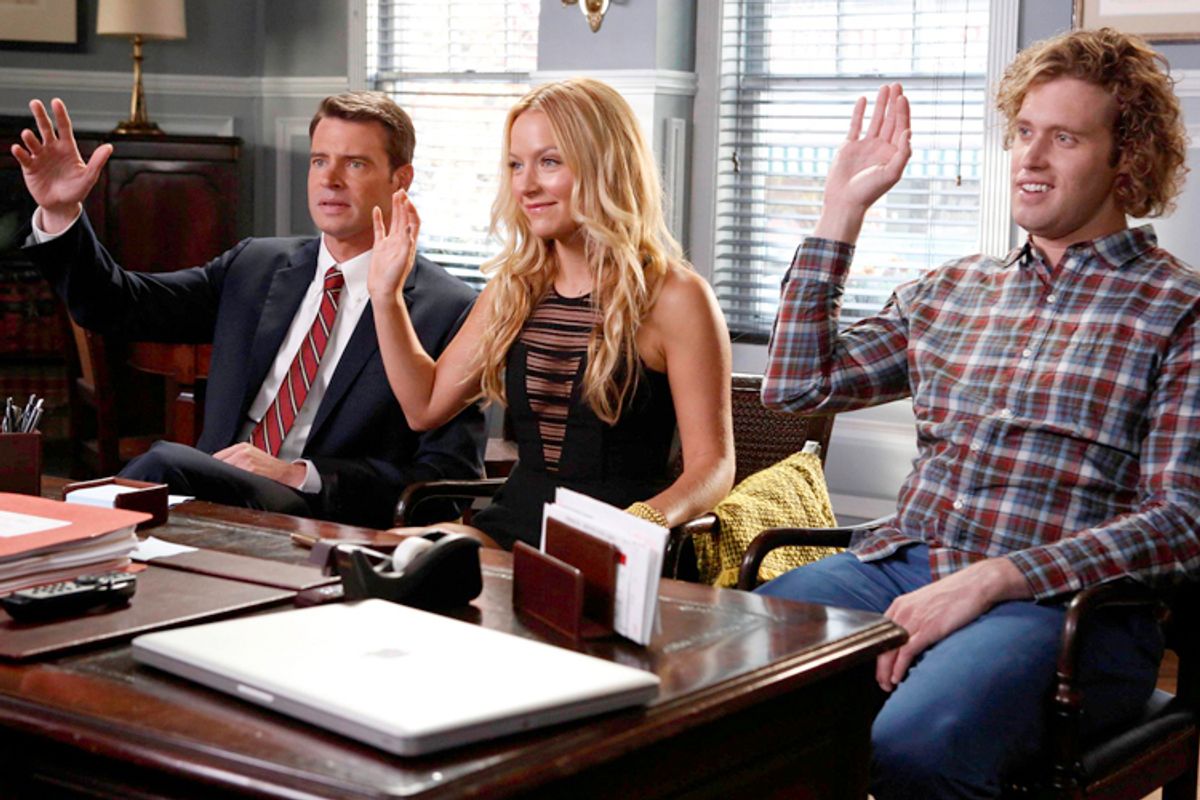 Last night, Fox premiered “The Goodwin Games,” a promising sibling sitcom that has been waiting to make it onto the schedule for a year. “Goodwin Games,” which comes from the creators of “How I Met Your Mother,” was announced at Fox’s upfront last May. Six episodes of it will be burned off this May. It’s a victim of Fox’s changing tastes and strategies: out with good-natured family comedies, in with sitcoms about dudes with guns.

“The Goodwin Games” is fairly high-concept for a sitcom. Beau Bridges plays Benjamin Goodwin, a wacky mathematician and single father who has raised three full-grown, messed up kids: Henry (Scott Foley), an uptight, emotionally locked in surgeon; Chloe (Becki Newton, who has been sitcom cursed since “Ugly Betty” ended), a math genius who has thrown all her intelligence away to live like a party girl; and Jimmy (T.J. Miller), a sweetie-pie klepto who has been in and out of jail multiple times. All three siblings are casually estranged from each other and their father. Then their father dies. He turns out to have 23 million dollars saved up and a complicated plan involving many, many, many activities to have his children compete for his fortune, even though his real goal is patently to make them all remember how much they love each other.

Complicated sitcom concepts are usually good on paper and terrible in reality. Once a sitcom starts to click, being beholden to a particular form — like coming up with a competition every episode — goes from being a helpful crutch to a constraint. (That’s partly why ABC’s new sitcom “Mixology,” a whole season of which will take place over one night, seems like such a bad idea.) But “How I Met Your Mother” has done better with its concept — the eventual meeting of the mother — than almost any sitcom could, and “The Goodwin Games” seems like it could make its structure, which is full of flashbacks and callbacks, work.

The first episode isn’t riotous (truly hilarious pilots are rarer than ... even truly hilarious sitcoms), but it’s confident and charming and the characters seem fully formed. Miller’s cuddly, irresponsible criminal (he shows up at his daughter's house bearing gifts and she asks to see a receipt) is a new type and Newton’s Chloe — a really smart girl who aggressively decided to just be a pretty one — takes the subtext of so many of TV’s badly behaving single women and makes it text. One episode in, the characters seem like good company, with both more humor and more darkness ahead, so long as they can avoid getting too maudlin.

Not that they have much of a future ahead of them: "The Goodwin Games" will almost certainly air six episodes and be done. Last week the networks made a big to do about getting back to making mini-series — though they called them “limited” series or “epic” series — that would allow the networks to program all year and to compete with cable’s shorter seasons. But without any marketing or planning the networks have already, accidentally, gotten into making short-run sitcoms. In addition to “The Goodwin Games,” last year NBC aired six episodes of the very charming “Bent” and, starting this week, will air episodes of the strange Anne Heche series “Save Me," in which she plays a horrible alcoholic who starts communicating with God. These comedies are getting burned off thanks almost entirely to network mismanagement. The fact that “Bent” was better than any other sitcom NBC premiered last year wasn’t enough to save it, as will likely be the case with “The Goodwin Games.” But, on the brighter side, shows like this are an occasion for audiences to get used to the idea that some good things come in small packages. A knowingly brief relationship with a sitcom can be kind of fun — think of it as a summer fling.