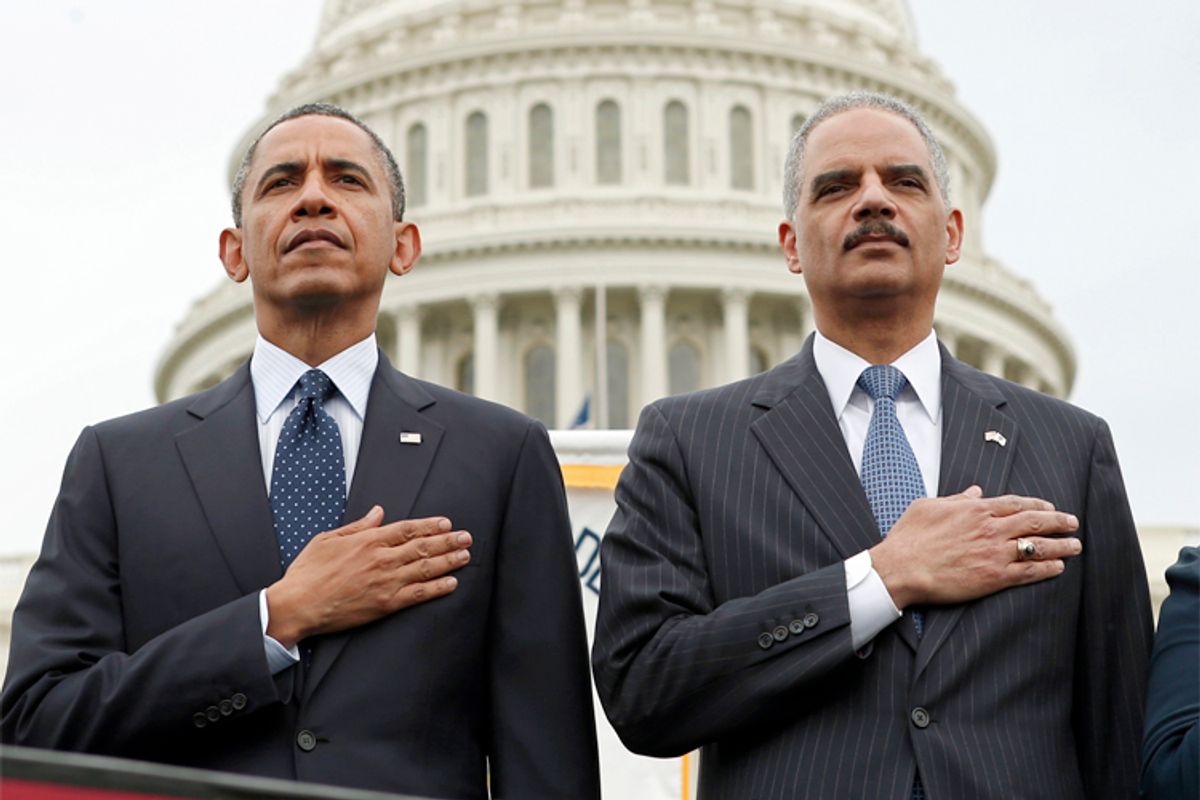 Addressing reporters Tuesday, White House Press Secretary Jay Carney said, "If you are asking me whether the president believes that journalists should be prosecuted for doing their jobs, the answer is no.” The comment came in light of revelations that in 2010 an FBI agent had described Fox News correspondent James Rosen as a possible “co-conspirator” in a crime for the journalistic act of obtaining leaked information from a State Department source.

Even if we are to take Carney at his word, his remark comes as little assurance. The president may believe that journalists should never be prosecuted for doing their job. What's at stake, then, is what this administration considers the job of a journalist. In the context of the ongoing war on leaks and an administration invested in the tight control of information, the presidential view on protected journalistic activity seems a far cry from a robust Fourth Estate.

Whether there was ever any intention of prosecuting Rosen, or whether the "co-conspirator" claim was simply a means to get a search warrant for the reporter's emails, is unknown. Both scenarios are troubling. In either scenario too, we have a government agency framing acts of journalism as potential crimes worthy of investigation and intensive surveillance. It's for this reason that civil liberties advocates and legal experts -- often with no love for Fox News -- are viewing the Rosen case as more serious even than the Justice Department's AP spying scandal.

“The administration’s draconian crackdown on disclosures of information to the media was already unprecedented. Now, it has crossed over a sacred line,” Elizabeth Goitein, co-director of the Brennan Center for Justice’s Liberty and National Security Program, told Salon. Goitein, who has worked extensively on the issue of government secrecy and document classification, sees the explicit targeting of a journalist for receiving leaked information as a dangerous new turn in the government's war on whistleblowers, with disturbing lessons about the government's respect for First Amendment protections. She told Salon over the phone why, in her view, the Rosen case is a new brand of troubling:

Those first amendment protections apply also to regular members of the public and private individuals. Now the justice department has special rules when it comes to subpoena’ing journalists for their sources because they understand that there’s special sensitivity in terms of the media’s right to report, but in fact it would be just as wrong for the administration to target Julian Assange or any individual who discloses information that that individual receives when that person has made no pledge and is under no obligation legally to keep that information within the government.

The targeting of journalists under the Espionage Act, whether it’s through the warrant application or an actual prosecution – I mean, that really spells the death knell for free reporting in this country, if that were to be permitted to continue. And so I think the crackdown on whistleblowers has been shameful in this administration but we’re in new territory now, and there’s an urgent, urgent need for action to stop this train before it gets out of the station.

For some time attorney Jesselyn Radack of the Government Accountability Project -- herself once a Justice Department whistleblower and now the attorney for whistleblowers including John Kiriakou -- has been warning of this government's "war on information." For Radack, long attuned to the administration's First Amendment abuses, the Rosen revelation (following on heels of the AP Scandal, and on the eve of Bradley Manning's trial) is "surreal." She too sees a potential watershed moment in the Rosen case, as she told Salon:

I hope it’s a game-changer. Finally, the mainstream media will hopefully awaken from its slumber and say, “Hey, this is broader than just a war on whistleblowers and our sources. It’s a war on us and journalists.” I do. I think even just the AP subpoena alone was a huge wakeup call and galvanized people. And again, finding out what happened with Rosen, even more so. Interestingly though I still don’t know if they’re linking it back to the fact that the reason Rosen is on the radar screen of the government is because of yet another leak investigation – that of Steven Kim. I mean, there was a front page Washington Post article about it, but I’m still not sure if they understand – part of me is like, welcome to my world.

... There is a part of me that feels like we have these moments of epiphany with Aaron Schwartz’s suicide or Sandy Hook Elementary or the Occupy movement when I think, “OK, our country might be getting its bearings back,” but then we kind of drop the ball again. But I’m hoping with the mainstream media on board in this fight, even if it’s out of their own self-interest, it’s fine, whatever motivates them. But I think it could be a game-changer in terms of this administration getting some much-deserved pushback on its full frontal assault of the First Amendment.

In line with concerns expressed here previously, Radack agreed that there is potential for these scandals -- and the ire in response to them -- to further shore up a division between a compliant, government-friendly media (who are "doing their jobs" in the eyes of the government) and a more challenging, robust press, which can be cracked down upon:

I do worry about the cozy relationship between the mainstream media and the government in how this plays out, in terms of these back-door, back-channel deals that exist between the government and the media that are already these unholy deals by which they hold stories. I am concerned about some sort of back-channel understanding or unspoken deal about them laying off journalists if journalists won’t easily cough up their sources or something like that. I always worry about the unintended consequences, but I hope that the mainstream media focus on the fact that it goes a lot deeper than just the AP and James Rosen... I do worry that whistleblowers will be left in the dust somehow, when it all shakes out and settles.

Both Raddack and Goitein see part of the problem in the vast overclassification of government materials. As Goitein pointed out:

I think overclassification breeds distrust in the system, and that contributes to leaks. I also think when you have so much overclassification, then everyone and their mother who works in government has to have a clearance in order to do these routine low-level jobs that you shouldn’t need clearance for. So we now have 5 million people in the government with clearances. Well, that’s one in 50 adult Americans with clearance. Of course we’re seeing leaks. That’s not closely held information. So I think there’s a lot of interplay. Now, that said, if overclassification were taken care of tomorrow, I’m not sure it would solve the problem in terms of the crackdown we’re seeing on national security whistleblowers, because that’s primarily what it is, but also people you’d refer to as leakers. I think that crackdown is ideologically driven and I think it’s hard to come to a different conclusion given the vigor with which this justice department has gone after people accused of leaking to the media. So I think it is about control, a method of control that is badly misplaced.

Radack too told Salon that while overclassification has been "rampant" for some years, "even if suddenly that were fixed today, there is a greater ideological struggle going on in terms of the secrecy regime that was put in place by Bush after 9/11 and that Obama has expanded along with the expansion over the last decade of executive power." For Radack,  overclassification is a symptom of that struggle, not a cause.

Framing the revelations about journalist surveillance in terms of an ongoing "struggle" in the name of government secrecy, the Rosen story comes at a crucial moment -- in the same week as the AP revelations and when Bradley Manning heads in to his final pretrial hearing before his June court martial. Raddack has called it a "harmonic convergence." As she put it, "I've been explaining for years that the war on whistleblowers is a back door way of targeting journalists. The main-stream-media has finally woken up to the fact that the Obama administration's unprecedented crackdown on whistleblowers is really a war on the First Amendment. I do feel like this could be a sea-change moment."