Kicked out of the mall -- for an anti-cancer hat 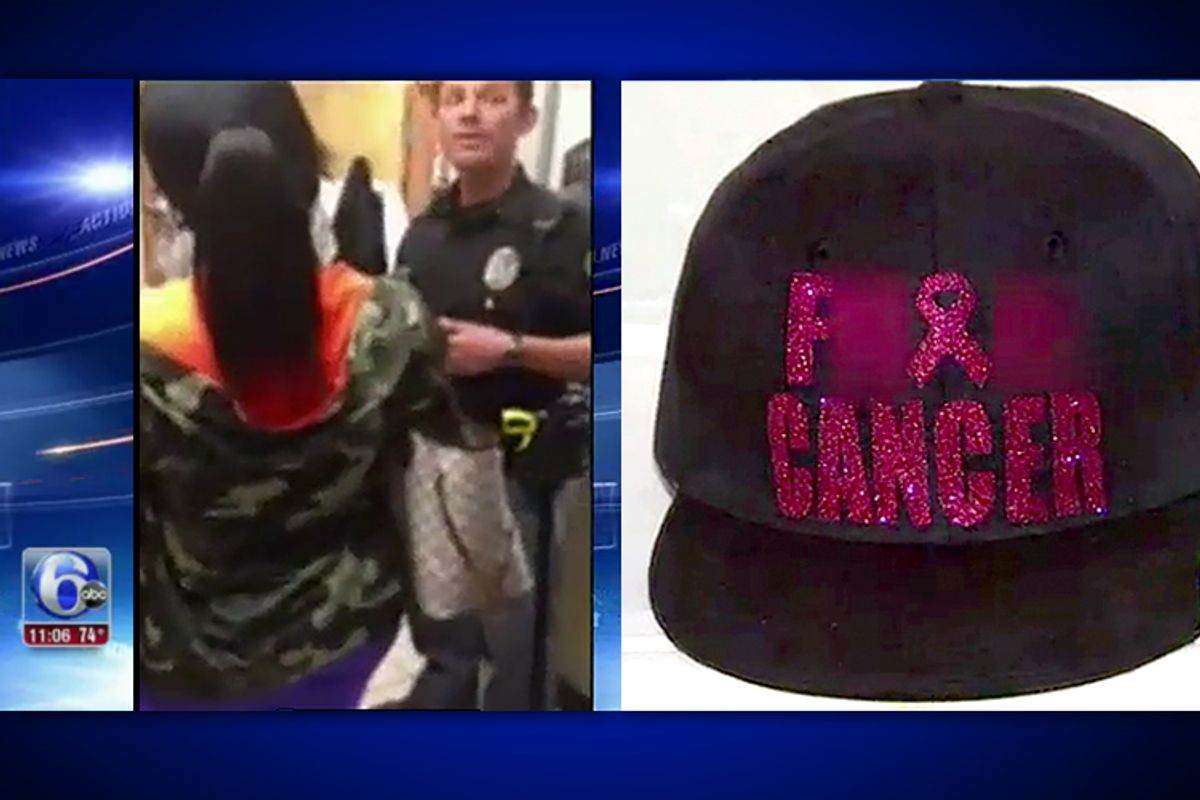 But when a family wore attire expressing that sentiment in Pennsylvania's King of Prussia Mall recently, they found that they were treated like the offensive ones. They were, in fact, kicked right out.

On May 14, sisters Makia Underwood, Zakia Clark and Tasha Clark lost their 51-year-old mother to breast cancer after a nine-year ordeal of surgery and rediagnoses and treatment. On Sunday, the family went to the mall to choose a dress for Zakia's daughter to wear to her grandmother's funeral. For this occasion, however, Zakia and Tasha chose to sport hats that read "FU*K CANCER" – the C replaced with a pink breast cancer ribbon.

The message isn't even a fully spelled-out obscenity. But it was enough for a white male security guard to approach the African-American women and order them to "Take your hats off" or leave. But Zakia refused, telling him, "I'm not leaving. I spend money here and I'm not going to leave."

The women have said that the guard replied, "Since you don't want to take your hat off, you can leave my mall," and took them to an office, where they were met by a police officer. Zakia claims the cop told them, "I find it offensive that you even have that hat that says 'FU*K CANCER.'" They were then escorted out to the parking lot, where Zakia claims even more security officers were waiting to assure that they left the premises.

The mall's management told the local ABC affiliate on Tuesday that "the mall is first and foremost a family destination. Certain words and images, whether obvious or suggested, spoken or written on clothing, are considered profane and can offend many people." But after the details of the sisters' story became public, Les Morris, a representative for Simon Property Group, called Zakia to apologize. In a statement, he said: "Certainly this could have been handled in a much more empathic and sensitive manner. We're very sorry about her loss and wanted to apologize for the way her party was treated. I do think this is an entirely different situation than a 16-year-old kid with a swear word on his T-shirt cruising the mall. We need to be empathic, sympathetic and listen and make sure that we're approaching each situation as it comes up."

That's a start. The mall and its employees might also want to consider that if they want to encourage a truly "family" environment, they're going to have to shut down a few of their own businesses. There's Chick-fil-A, the family-friendly chicken chain that "supports programs and marriage retreats to help strengthen and enrich marriages" – as defined by the company's "biblically-based principles." If you're a different kind of family, though, maybe Chick-fil-A isn't always so welcoming.

There's Abercrombie & Fitch, which is inviting, to a point. As its CEO Mike Jeffries says, "A lot of people don’t belong [in our clothes], and they can’t belong. Are we exclusionary? Absolutely." And if you don't want to be considered profane, there's American Apparel, and hey, who could take offense at anything they've ever done?

Speaking with the local ABC News, the sisters easily pointed out stores in the King of Prussia that vend clothing far more provocative than their hats, including shirts that read "I Just Want to F*** You" and "B**** Better Have My Honey." As Makia says, "They say they don't want that in their mall, but they sell it. That's not right."

More significantly than the mall's blatant hypocrisy, though, is it's flat-out stupidity. It takes a special kind of team of idiot mall cops, one right after the other, to see a family with a message that includes a pink ribbon and the word "cancer" and not think, "Hmm, perhaps these individuals have had a powerful personal experience that we should be sensitive to. Perhaps there is more going on here than the suggestion of obscenity."

If those guys think a "FU*K CANCER" message is unpleasant, it's not even close to how unpleasant the experience of watching someone you love die of cancer is. And their actions certainly suggest that the King of Prussia Mall is staffed by a security force that knows how to read -- but has zero comprehension. "I just wanted to tell them the whole story," Makia says. "I wanted to tell them a monster came into our house, got into my mother and we had to watch that until the day it took her. So don't tell me it's offensive to say, 'FU*K CANCER.'"