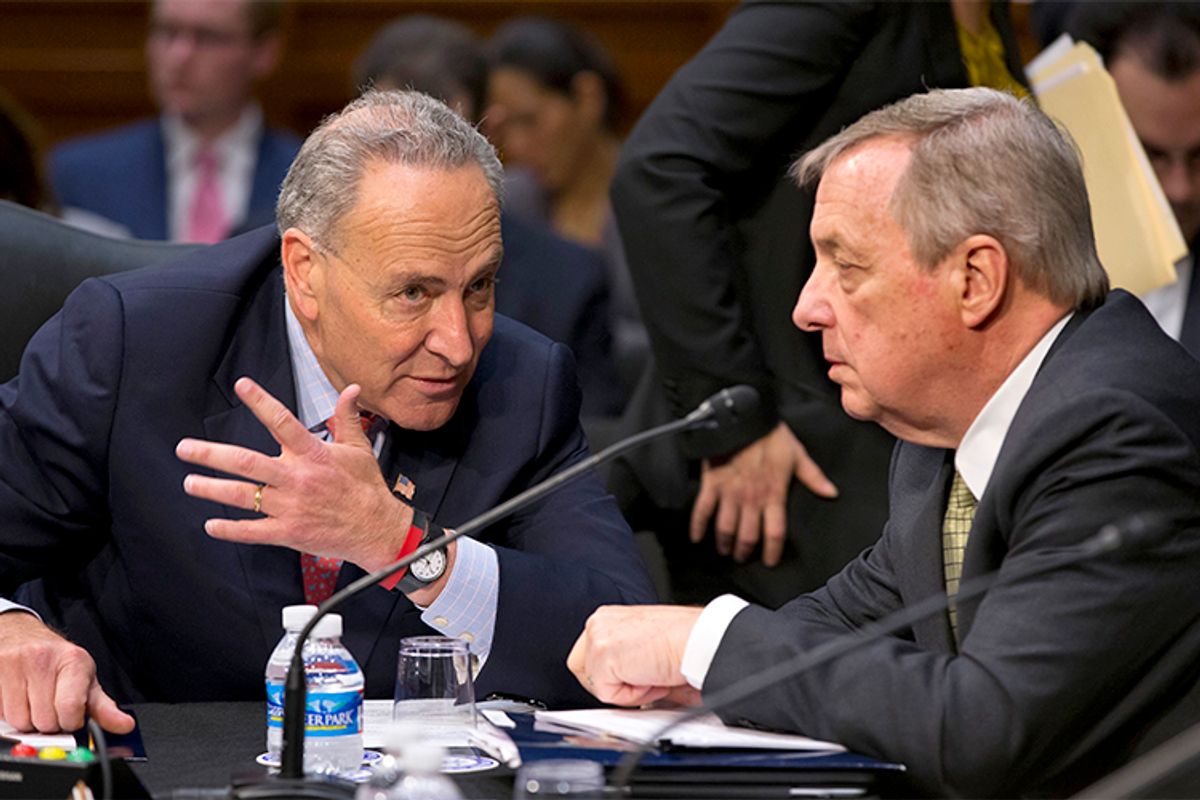 “I believe, in my heart of hearts, that what you’re doing is the right and just thing, but I believe this is the wrong moment, and this is the wrong bill.” That was Sen. Dick Durbin yesterday, one of several Democratic senators who wistfully explained -- some of them even convincingly -- why a provision allowing binational gay couples to reunite under immigration reform shouldn’t even be voted on. Republicans, notably Lindsey Graham and Jeff Flake, were openly threatening to sink a bill with LGBT provisions, risking the unbroken momentum of immigration reform. Indeed, the bill was successfully voted out of committee. All those "Lincoln" screenings in Washington last year have evidently sunk in, because Tony Kushner couldn’t have scripted it better.

Here was Chuck Schumer yesterday: "I'm a politician. That means I have chosen my life's work in the constraints of the system to accomplish as much good as I can. I accept the tough choices, the painful but necessary imperfection of compromise, which is a part of our system of government." Lincoln screenwriter Kushner told Chris Hayes that one message of "Lincoln" was that “Too much impatience can make it impossible for anything to happen,” and he had his president tell the radical Thaddeus Stevens, “When the people disagree, bringing them together requires going slow till they're ready to make up the ...” and Stevens cut in, “I shit on the people and what they want and what they’re ready for!” (Leahy, whose disappointment yesterday seemed the most genuine, did not go quite that far.)

Last night's scene did the movie one better, because this wasn't just about how far to go, but about whose turn it was. Some Republicans may eventually vote for comprehensive immigration reform that would potentially change the lives of millions of people, and, it is hoped, throw some Latino votes their way; they still don't even pretend to care about gay people. Many people believe that the former represents an opportunity that simply hasn't existed before, and that the discrimination against the latter is just a matter of time. The Supreme Court may overturn the Defense of Marriage Act that helps keep these couples separated, though experts have differed on how much explicit authorization from Congress would be needed even if DOMA is wholly struck down.

Maybe that's why the president initially staked out support for the LGBT provision but easily abandoned it, believing there wasn't much at stake. Activists told the New York Times the White House had even pressured Leahy not to push it, a sharp contrast from how Jay Carney described President Obama's position in January: “The president has long believed that Americans with same-sex partners from other countries should not be faced with the painful choice between staying with the person they love or staying in the country they love.” That stirring rhetoric was nowhere to be seen in the president's statement last night.

This isn't the first time groups, often overlapping, have been pitted against each other -- in this case, Latinos and LGBT people -- and told there is only so much change to go around. "Gay discrimination as price to pass immigration bill similar to black discrimination as price to pass Social Security in 1935," tweeted writer Rich Yeselson last night. Similarly, domestic workers (mostly women) and agricultural workers (mostly men) were excluded from labor protection legislation in the same era, which Juan F. Perea noted was "well-understood as a race-neutral proxy for excluding blacks from statutory benefits and protections made available to most whites." Women in the civil rights and black liberation movements for years described being told to wait their turns; so were lesbians and eventually transgender people within the women's movement.

And they were often right that the forces of opposition were looking for any excuse to dismiss them and maintain the status quo. The changes they did eke out were certainly better than nothing. But yesterday, it was hard to escape the feeling that the script leaving some people out had already long been written.