The executive who took the Fifth has bungled this mess from start to finish. Why is she still employed? 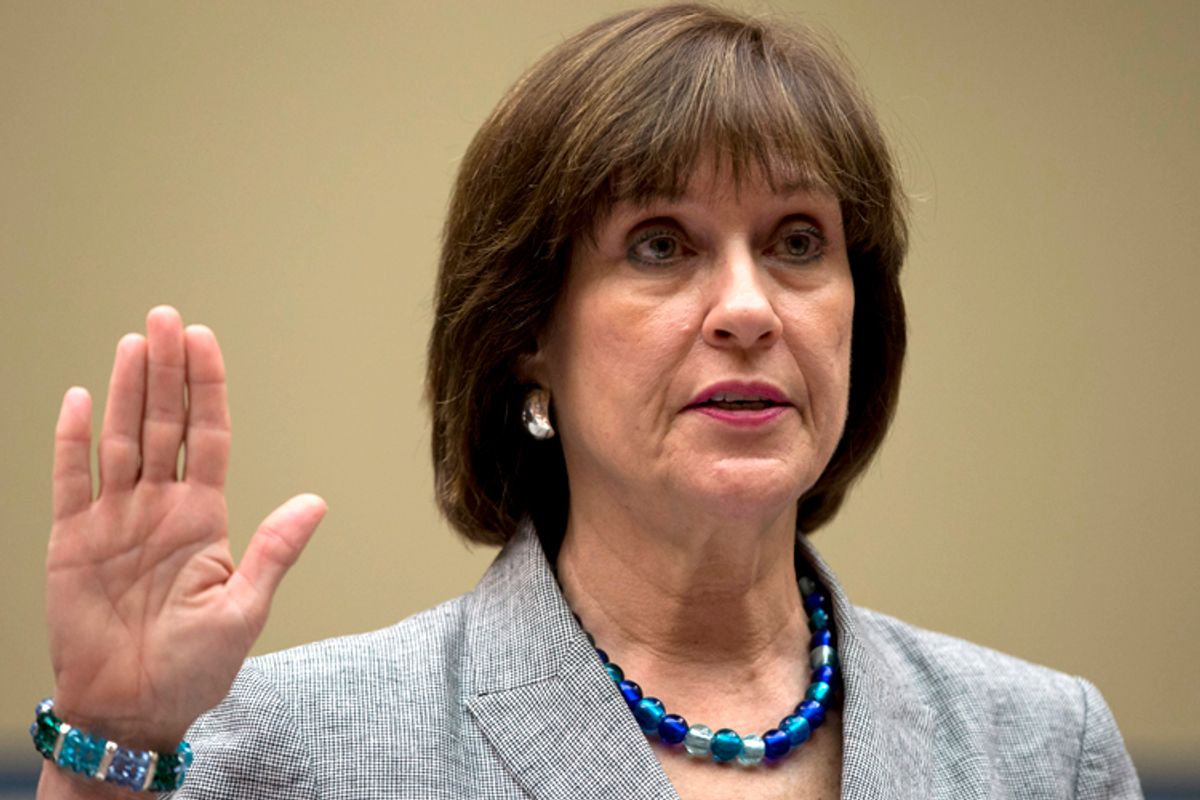 One puzzling response to the IRS mess, common among pundits, is demanding firings, of anyone, anywhere, now, yesterday – Obama should just make heads roll! “Why weren’t more people fired?” Sen. Max Baucus asked at a Senate hearing Tuesday. But shouldn’t we all want to figure out exactly who is responsible for targeting conservatives before trying to placate the gods of outrage by offering up indiscriminate scapegoats?

Acting IRS director Stephen Miller walked the plank, even though there’s no evidence he had anything to do with the wrongful targeting of conservative groups applying for tax-exempt status, and the commissioner of the agency's tax exempt and government entities division, Joseph Grant, is retiring early. I’m not defending either man; bad things happened on their watch and that’s what happens to people at the top. Yet the woman at the center of the scandal, Lois Lerner, the IRS director of exempt organizations, still has a job --  and that makes no sense.

I don’t like scapegoating, but Lerner seemed like a reasonable candidate to lose her job even before she delivered a tin-eared self-defense in front of Darrell Issa’s House Oversight Committee – and then pleaded the Fifth Amendment, exercising her constitutional right to avoid self-incrimination,

“I have not done anything wrong. I have not broken any laws. I have not violated any IRS rules or regulations,” she told the committee. And then she took the Fifth.

It must be said that pleading the Fifth is not an admission of guilt, and it might be a reasonable response to a political witch hunt. Lerner’s lawyers insist that because the Justice Department has opened a criminal investigation into the IRS scandal – which was probably, in itself, a ham-handed and unnecessary political response to right-wing pressure – she had no choice but to refuse to testify at the hearing.

But Lerner should have been gone shortly after this scandal first unraveled in the press. Not only is she the person who was in charge of the group that wrongly targeted conservatives, she dishonestly testified that she didn’t know about the targeting until 2012, when the inspector general found she knew as early as 2011. She’s the person who told a conference call of reporters, “I’m not that good at math,” even though she’s a manager in an agency that’s at bottom all about math.

What I think is even more politically and morally suspect – and has gotten very little attention -- Lerner actually presided over the bizarre, bumbling rollout of the story, by planting a question about the controversy with an attorney at an American Bar Association conference. According to Morgan Lewis tax lawyer Celia Roady, Lerner herself asked that Roady inquire about whether the IRS had targeted conservative groups. That led to Lerner’s public apology – and the scandal swirling around the White House, which found itself surprised by the sudden disclosure.

The invaluable tax-policy expert David Cay Johnston called for Lerner’s firing a week ago – and that was even before there was proof that she had set up the question at the ABA conference.

There seems to be some confusion about whether Lerner is protected by civil service rules. One IRS official told Politico that like Stephen Miller, she’s a member of the Senior Executive Service, and “If the president/Secretary Lew could ask Steve Miller to resign, they should be able to ask Lois Lerner to resign.” Rep. Elijah Cummings, who says Lerner must go, suggests that she could be put on paid administrative leave if she’s protected by civil service rules. And while civil service rules admittedly make firings difficult, they don’t make them impossible. There’s something very weird about Lerner holding onto her job.

Unfortunately, it may be harder to get rid of her now that she’s taken the Fifth, if it looked like she was penalized for exercising her constitutional rights.

As Media Matters notes, there’s blatant right-wing hypocrisy on this issue. Charles Krauthammer praised Scooter Libby when he took the Fifth during the Valerie Plame investigation; now he’s telling Fox News that Lerner is all but admitting guilt.

On the other hand, Libby isn’t the best role model, since he was found guilty of obstruction of justice and perjury.

Why Lerner still has a job is the biggest mystery in this entirely mysterious story.