Oklahoma residents return home to pick up the pieces 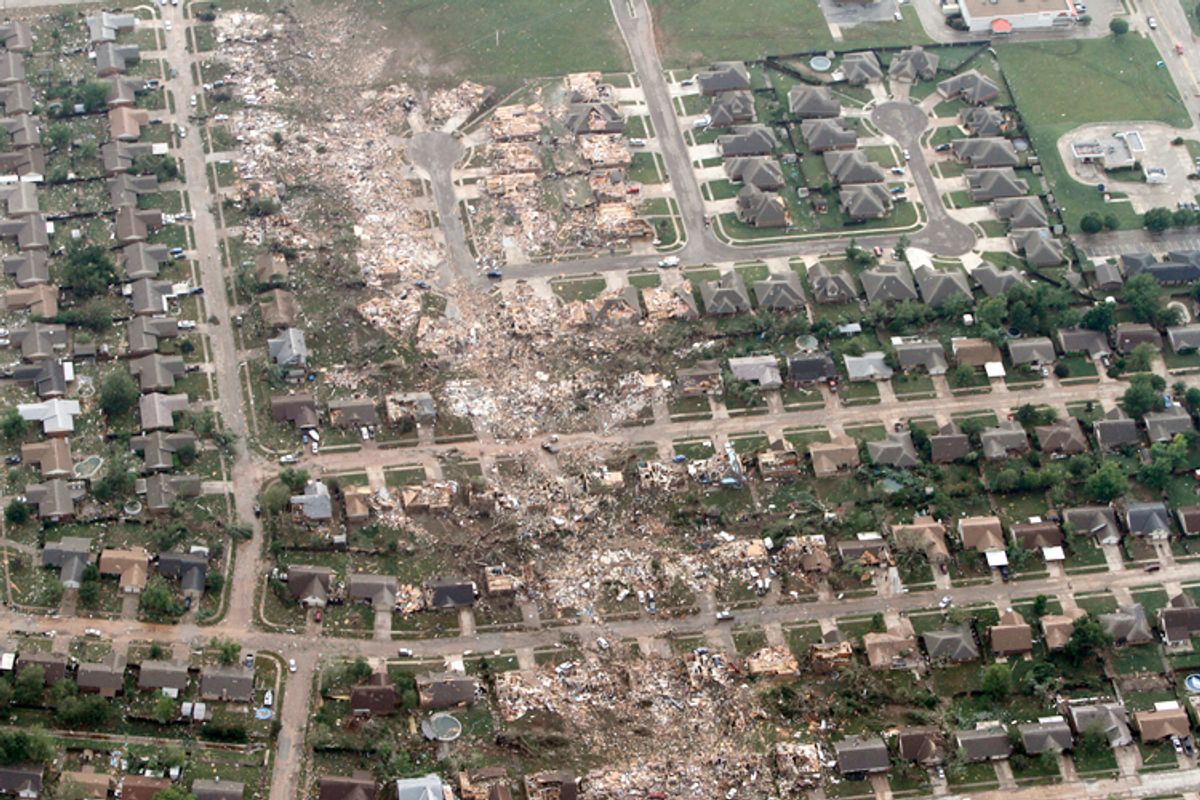 MOORE, Okla. (AP) — With her son holding her elbow, Colleen Arvin walked up her driveway to what was left of her house for 40 years.

It was the 83-year-old grandmother's first time back at her home since a monstrous and deadly tornado ravaged her neighborhood in suburban Oklahoma City. Part of the roof was sitting in the front yard, and the siding from the front of the house was gone. As her son, Jeff, and her grandsons picked through what was left of her belongings, Arvin found some dark humor in the situation.

"Oh thank God," she said, laughing, when a grandson brought over her keys. "We can get in the house."

As state and federal officials work to set up disaster recovery centers to provide aid and assistance, Arvin and other residents of Moore are beginning the deliberate process of assessing what's left of their homes and possessions and what comes next.

Officials are still trying to make sense of what will be needed in the coming days, weeks and months: Will homes be rebuilt or torn down? Where will the children go to school? How much will it all cost?

Helmeted rescue workers have been searching tirelessly for survivors and victims, and officials said Tuesday they planned to keep going — sometimes double- and triple-checking home sites. Officials were not certain of how many homes were destroyed or how many families had been displaced. Emergency crews had trouble navigating devastated neighborhoods because there were no street signs left. Some rescuers used smartphones or GPS devices to guide them through areas with no recognizable landmarks.

The Arvins and others looked for bright spots throughout an otherwise dark day. Arvin's son Jeff noticed a set of five dishes without a single crack. He and his nephews pulled out golf clubs, pictures and a decorative key and note holder.

It was an ordeal they've faced before.

Monday's tornado, which traveled 17 miles and was 1.3 miles wide at points, loosely followed the path of a twister that brought 300 mph winds in May 1999. This week's tornado was the fourth since 1998 to hit Moore, a middle-class community that has been one of the fastest-growing suburbs of Oklahoma City.

Billy McElrath's entire home was reduced to rubble, and even its concrete foundation was split. His wife and a friend McElrath hired to do some painting managed to make it into an underground shelter moments before the tornado shredded the home.

His 1968 red convertible Corvette was smashed under heaps of bricks and wooden frames inside what was left of his garage.

"My wife got it for my 50th birthday last August," McElrath said. "I haven't driven it since my son and I took it to a car show in Springfield last September."

His plan was simple: "We'll just start over."

Survivors emerged with harrowing accounts of the storm's wrath, which many endured as they shielded loved ones in hallways, closets and bathrooms.

Larry Harjo, his twin brother and their wives headed for the hospital at the end of the street only minutes ahead of the tornado that ripped the roof off their home and blew out its walls.

"We could see the tornado coming. We could see one side of it, but we couldn't see the other so we knew it was big," Harjo, 45, said while standing in his driveway. "There was no surviving that. It was either underground or out of the way kind of thing and we got the hell out of Dodge."

The hospital was their plan. They had sheltered there before, but this time, it took a direct hit.

"We were directly center of the hospital and we could hear the cars hitting the building, so we knew it wasn't going to be nice," he said. "Thump, thump, thump. Loud thumps."

"Ceiling tiles falling everywhere. I thought it was going to cave on us there for a minute," he said.

From the air, large stretches Moore could be seen where every home had been cut to pieces. Some homes were sucked off their concrete slabs. A pond was filled with piles of wood and an overturned trailer. Also visible were large patches of red earth where the tornado scoured the land down to the soil. Some tree trunks were still standing, but the winds ripped away their leaves.

Officials had revised the death toll downward from 51 to 24 on Tuesday after the state medical examiner said some victims may have been double-counted in the confusion immediately after the storm. More than 200 people were treated at area hospitals.

The National Weather Service said the tornado, which was on the ground for 40 minutes, was a top-of-the-scale EF5 twister with winds of at least 200 mph — the first EF5 tornado of 2013.