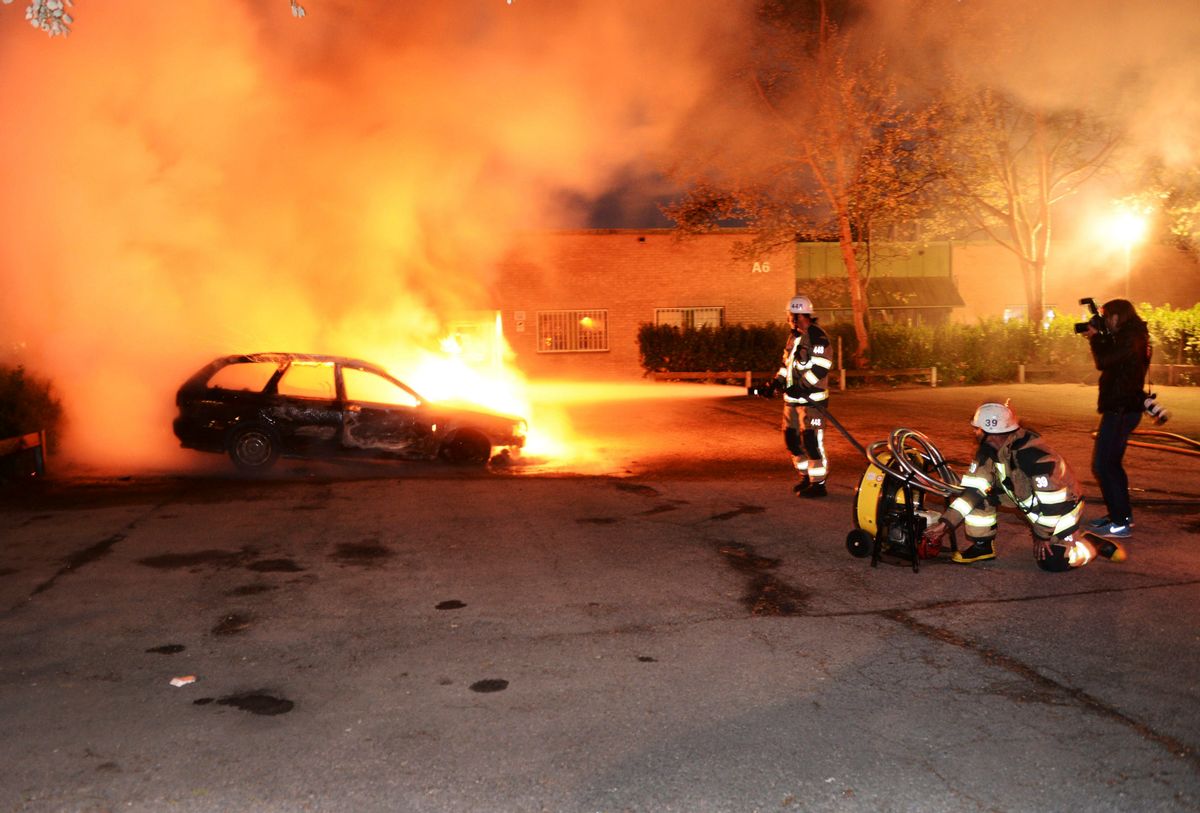 BRUSSELS, Belgium — Youths set cars aflame and threw stones at police and emergency services for the third consecutive night in the poor suburbs of Stockholm, one of Europe's wealthiest capitals.

Rioters Tuesday night attacked a police station in Jakobsberg, damaged two schools and set on fire an arts and crafts center, in spite of Prime Minister Fredrik Reinfeldt's call for people to "pitch in to restore calm."

It's believed the riots are linked to the death of a local man, shot dead by police on May 13 after reportedly threatening them with a machete. Since then riots or related incidents have been reported in nine suburbs, especially Hubsy, home to about 12,000 people.

"We've had two nights with great unrest, damage, and an intimidating atmosphere in Husby and there is a risk it will continue, said Reinfeldt on Tuesday.

"We have groups of young men who think that they can and should change society with violence," he added. "Let's be clear: this is not OK. We cannot be ruled by violence."

Officers dispatched to Husby have been accused of using racist language against residents, calling them "monkeys," "rats" and "niggers" on Sunday night, when at least 100 cars were torched.

"I can understand the police officers were stressed, but this language is unacceptable, and unfortunately nothing new," Rami al-Khamisi, founder of the Megafonen youth organization,told The Local.

The riots have come as a shock for Sweden which was long seen as a model for many in Europe both for its social welfare system and for the successful integration of migrants — though not everyone has shared in Sweden's success. Unemployment for native born citizens is at 6 percent, compared to those born outside, which is at 16 percent.

While other European nations have sought to shut their doors to migrants, Sweden has seen immigration as a opportunity to bolster the work force as a counterweight to the country's ageing population.

"It is my firm belief that legal and orderly migration can contribute to development for the individual as well as for communities, countries of origin and countries of destination," Tobias Billström, Sweden's minister of migration, said in a speech last month.

However recent years have seen growing support for an anti-immigration party, the Sweden Democrats, which has been swift to seize on the rioting as a sign that the center-right government's integration policies are not working.

"We now have a situation where you can not maintain order in neighborhoods in the nation's capital," said party secretary Bjorn Soder, in a statement. "This is a problem whose causes can only be traced in a deeply divided society as a result of an irresponsible policy."

Parties on the left also blamed the rioting on government policy, saying the erosion of Sweden's famed social welfare model over six years of rule by the center-right Moderate Party has led to a build up of social unrest in underprivileged districts.

"What has Husby received in recent years?" asked Ann-Margrethe Livh, of the Left Party, in a references to the Stockholm suburb where the riots began. "Cuts, reduced future opportunities, segregation and stigmatization."

Welfare benefits have slowly eroded since the 1990s, and Sweden has the fastest growth in inequality compared to other advanced Organization for Economic Co-operation and Development (OECD) economies. Sweden also suffers, like other European nations, long-term youth unemployment, especially in immigrant-populated areas.

About 14 percent of Sweden's population is foreign born. Migrants from neighboring Finland are the biggest group, followed by Iraqis, Bosnians and Iranians.