The camp-free "Behind the Candelabra"

Steven Soderbergh's Liberace biopic shows the famously flamboyant entertainer as a person, not a stereotype 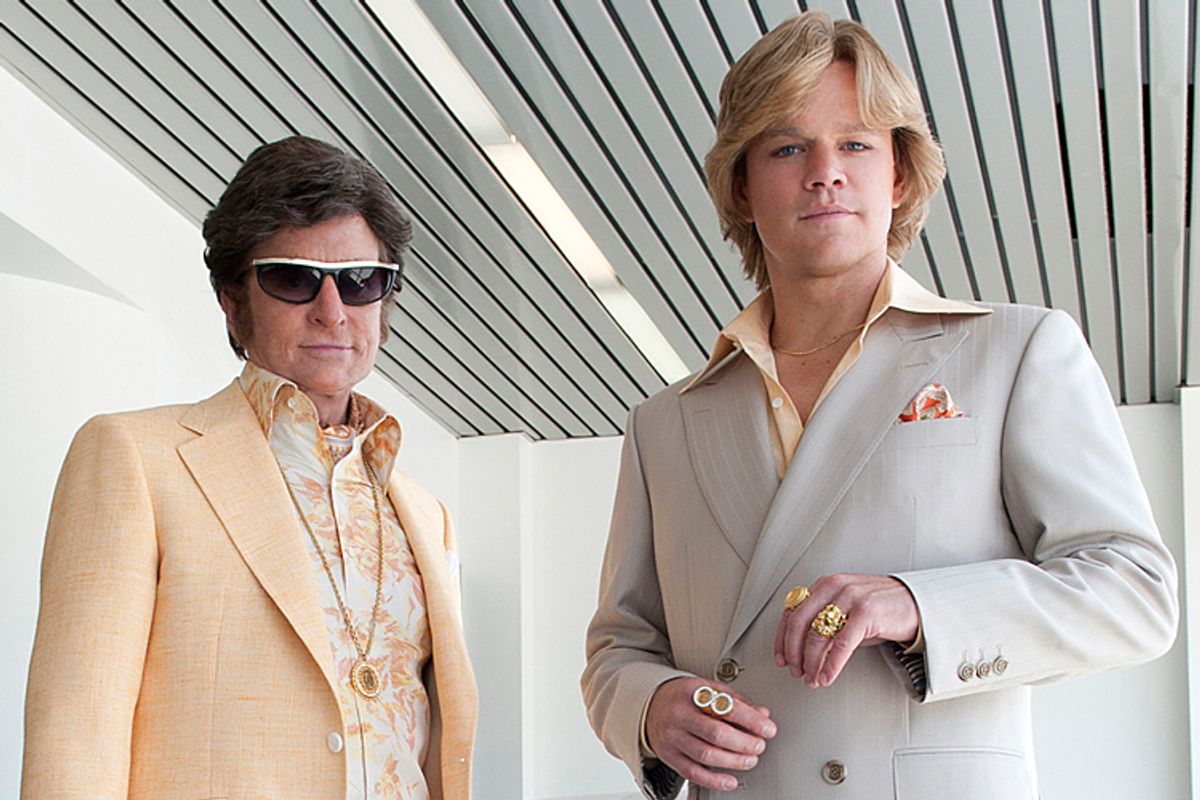 The most impressive thing about “Behind the Candelabra,” Steven Soderbergh’s much-anticipated HBO film co-starring Michael Douglas and Matt Damon as the flamboyant pianist Liberace and his young lover, Scott Thorson, respectively, is what it is not: campy. If you have seen Michael Douglas and Matt Damon in costume for this film — think sparkles and Speedos — you know this is no small accomplishment.

“I personally support the Austrian rhinestone business,” Douglas says early in the movie, pitching his voice nasal and fey, as he gives Thorson a tour around his lavish, self-decorated home, full of pianos, chandeliers, authentic Roman columns, and a house boy who offers hors d’oeuvres next to the bulge in his tight pants. An impressed Thorson — Damon with a near Farrah Fawcett hairdo — soon moves in and begins to sport a high-definition thong tan-line. Over their near-decade long relationship, there will be outfits that would make Elvis jealous, plastic surgery, fur coats, hot tubs, limousines, drugs and sex, and yet “Behind the Candelabra,” which premieres on Sunday night, never even edges into “Magic Mike”-level cheekiness. (Except, perhaps, when Rob Lowe’s plastic surgeon, who has been under the knife too many times himself, and his cat lady brow appear.) It’s like all the ingredients for a sugar rush of a dessert have been assembled and instead mixed together to make something surprisingly sensible, but not exactly delicious.

Douglas has the flash, name part, but “Behind the Candelabra” is Thorson’s story. As the movie opens he is living with foster parents in a house in Los Angeles, training dogs for movies. A pickup named Bob (a mustachioed Scott Bakula) takes him to see Liberace’s show, and Thorson is captivated. In a Vegas showroom, surrounded almost entirely by middle-aged women, Scott whispers to Bob, “It’s funny a crowd would like something this gay.” “Oh, they have no idea he’s gay,” Bob replies. Scott meets Liberace — who goes by Lee — backstage, and Lee immediately takes a shine to his unassuming sweetness. He soon flies Scott out for another show and carefully seduces him.

Liberace is friendly and beguiling, open and totally canny, a nice and also strategic man. (Douglas' performance contains more steel and self-knowledge than sequins.)  Sitting in a hot tub, he fosters a sense of intimacy by oversharing. He draws Scott out by pretending to be the person in need, only to become the caregiver. Scott, 39 years younger than Liberace and far more innocent, sees Lee’s desire and kindness, but not his knowingness. As Scott readies himself to move in, he tells his foster mother, "He’s lonely … My eyes are open.” But one’s eyes can be wide open and still not see, as Liberace’s entire career demonstrated.

“People see what they want to see,” Liberace instructs Scott soon after they begin cohabitating, and people’s willingess to do so, to ignore that which is right in front of them, constitutes the major theme of “Behind the Candelabra.” It is not just the key to the audiences' relationship to Liberace, it is the key to Scott's relationship with Liberace. Scott, like all those middle-aged women, willfully ignores that which is threatening to him. From the very start, Scott is warned that he is just the latest of Liberace’s men. He moves in as Billy Leatherwood (Cheyenne Jackson), Liberace’s protégé and previous boyfriend, is sulkily moving out. The houseboy explains to Scott that there have been many before him, and there will be many after. But Scott proceeds like this fate will never befall him, becoming entirely dependent on Lee. To be fair, it does take longer for Lee to discard him than he did anyone else.

Soderbergh is particularly interested in presenting the relationship as fundamentally loving, even as its flaws —  an intense power imbalance and Thorson’s growing drug problem, one he develops trying to stay thin for Lee — come to the fore. Lee and Scott are deeply sexual, but also deeply companionate, lots of pillow talk and sitting by the TV watching Carson. In a fight later in the film about why Thorson won’t let Liberace top him, Liberace yells that he feels like they are in some gay “I Love Lucy.” “Oh, Ricky, if you really loved me, you wouldn’t fuck me up the ass,” Lee says, which is a canny observation about “Behind the Candelabra” itself. The movie is not a sitcom, but even when the subjects are anal sex, plastic surgery or drugs it is intentionally domestic and grounded. Many more scenes than you would expect are calm, almost dull.

To highlight the every-couple aspect of Liberace and Thorson, Soderbergh has to give a generous gloss to some of the relationship's quirks. (Quirks is, in and of itself, putting it too generously.) When Scott met Liberace he was 17. Matt Damon looks amazingly young in early parts of the film, but not that young. When Liberace and Scott discuss plans for Liberace to adopt Scott — to be “father, brother, lover, best friend”' — the fact that Damon looks 30 makes this an order of magnitude less creepy than it would be if he looked 18.

Creepier still is Liberace's insistence that Scott have plastic surgery to look more like him. But the movie does not make much of this with regard to Lee’s psychology, to the narcissism and control inherent in it. It’s used more to demonstrate how dependent Thorson has become, to the point that he knows he must alter his face to remain in Lee's good graces. (“Won’t it be weird looking in the mirror and not recognizing myself?” Scott wonders. That’s another way not to see what’s right in front of you — to  change your reflection.) After Scott has undergone the surgery, a fan asks if he is Liberace’s son. During a fight, Scott tells Liberace this knowing it will make him happy. They kiss and smile and make up, a moment presented sweetly enough that you have to consciously remember that what is being used as foreplay is the intimation of incest.

We live in a cultural moment — at least in the blue state part of the culture — where calling straight actors brave for playing gay is borderline insulting: They are actors, it’s a part. Is it a good part or a bad part? But however politically correct Michael Douglas and Matt Damon and cultural commentators are about this film, there remains frisson in the idea of the two of them having sex and behaving flamboyantly, as the hubbub around this movie makes clear: Douglas hasn’t gotten this much attention for a role in a long time.

Soderbergh seems very aware of this prurient interest. His total avoidance of  camp and his deeply sympathetic treatment of both major characters is a way to get past that, to make Liberace and Thorson people, not stereotypes. As Lee lies on his deathbed he tells Thorson, “I don’t want to be remembered as some old queen who died of AIDS." Soderbergh is doing his part, even if he has had to soften some edges. At the end of the movie a title card informs us that Scott Thorson now "lives in Reno, Nevada." More precisely, Scott Thorson is in jail in Reno, Nev. Filmmakers especially see what they want to see.