The Maker kids are alright

I want my electric-powered cupcake car and I want it now. A trip to the Maker Faire 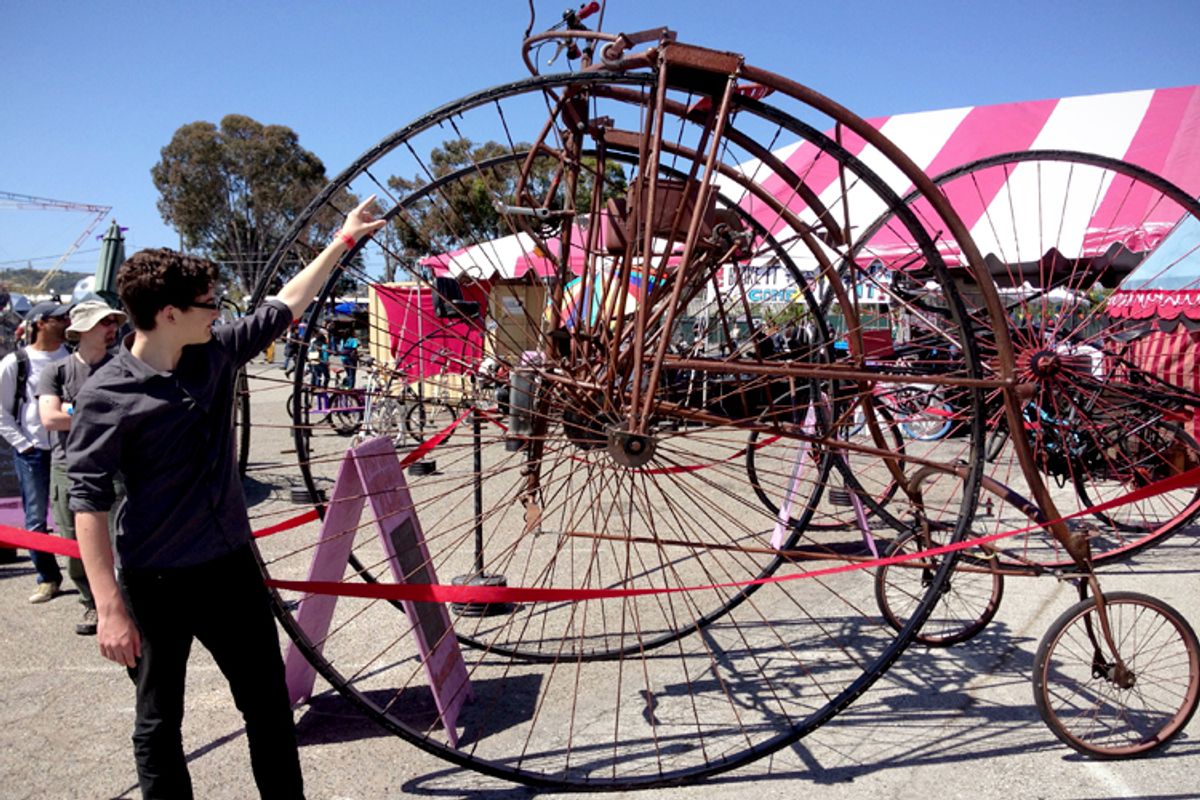 You don't see bicycle-powered cardboard rhinos every day. But when you nearly stumble into one at a Maker Faire, you don't even blink. After just a few hours spent navigating one's way though twirling electric-powered cupcake cars and dashing steam-punk-attired ladies and gentlemen, you become well-trained to expect the incongruous and delightfully absurd. And you start thinking, hmm ... I've got a lot of cardboard in my basement ... what completely bonkers thing can I do with?

Mark Frauenfelder, editor in chief of Make Magazine, calls the Faire "a magic space-time moment." I can't argue. The Maker Faire my son and I visited in San Mateo, Calif., on Saturday pulsated with a vibe so enthusiastic, so healthy, so creative, and so gosh-darn happy it was impossible not to get swept away. If the hands-on, funky robot, DIY delirious madness of the Maker Faire offers us a clue as to where the culture is headed this century, then guess what: Maybe things aren't going to be so bad, after all.

You can learn how to sew or how to make a circuit board at the Maker Faire, play with Lego or 3-D printers, listen to the wisdom of sustainable farming experts or watch the mad scientists behind EepyBird.com drop 640 Mentos into 108 bottles of Coke Zero and create a dazzling ballet of choreographed soda gushers. You can ride a bike seemingly designed by Dr. Suess, or whirl around a tire-swing to the accompaniment of a vintage PacMan soundtrack.

My son and I fought our way into one exhibition space that was so jam-packed and noisy and dark that it was hard to figure out what was going on until we struggled our way deep into the crowd. Then we saw two giant Tesla coils aimed at a cage containing three children. A switch got flipped, bursts of lightning flashed from the coils to the cage, and a seriously rocking version of the theme song to "Doctor Who" started blasting. My son and I turned to each other and high-fived. But the line to get in the cage was too long, so we checked out some drone quadcopters instead.

I've been to geek gatherings -- gaming conventions, software programmer conferences -- where nearly everybody was white, male and pale from too much time spent in virtual words. A Maker Faire is geeky as all get out, but (at least in San Mateo) it is also incredibly diverse in terms of age, gender and race. And everyone shares the same drive: not just to gawk but to get their hands dirty. Everywhere you look, there are stations at which the young and old are encouraged to do something, make something, craft something. A Maker Faire negates everything you've ever heard about how the ubiquitous spread of computer technology has created a generation of kids locked in thrall to their screens.

Indeed, watching the swarms of kids devouring every possible crafting/hacking/mashup-ing opportunity, I could only think, these are the youngsters who will be opening up their own Etsy stores in the months and years to come. I saw one kid, who couldn't have been more than 9 years old sitting behind a table stacked with old busted circuit boards that had been transformed into analog clocks. "Did you make these yourself," asked one admiring grandmother. He nodded. If, as William Gibson once wrote, "the street finds its own uses for things," then the Maker Faire is the Rome that all those streets lead to. Repurpose, recycle, reinvent.

In Northern California, the hippie and the geek have long been intermarrying. At Maker Faire, their spawn are coming of age. The Maker movement is a real thing. And it's wonderful.