Weak, incompetent Democrats blow another one

Democrats had every advantage on the immigration issue -- and still caved on their goals, preemptively 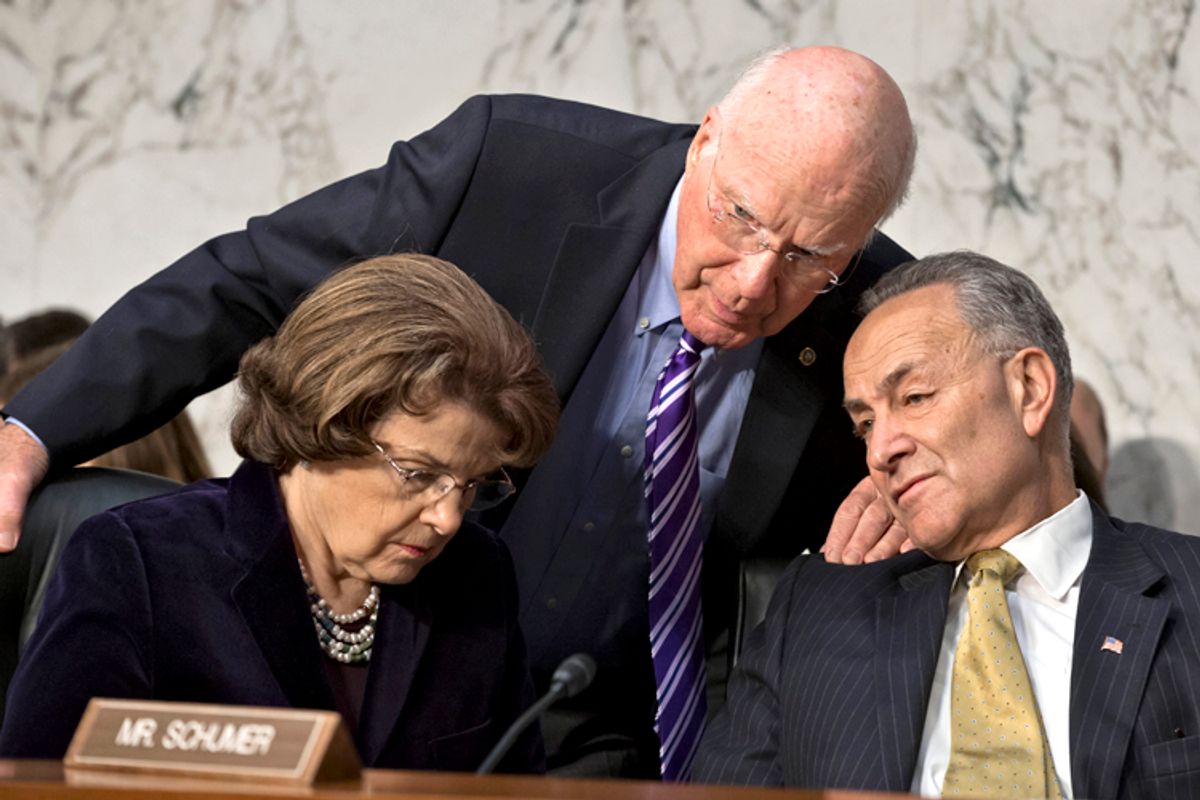 My friend John Fugelsang likes to say that the Democratic Party is like an S&M submissive who forgot his safety word. After the lame performance of Democrats in the immigration reform markup, I would say Fugelsang is being generous. Republicans are incredibly skilled at holding no actual power but nonetheless making wildly effective threats. Democrats on the other hand display the unique and vexing ability to have every political advantage and still cave on their own goals, more often than not preemptively.

I’ve said it before and I’ll say it again: I would not be surprised if the modern Democratic Party’s strategy is secretly being bankrolled by Eli Lilly as a ploy to sell Prozac to liberals.

In the latest example of this disconcerting trend, Sen. Orrin Hatch (R-Utah) proposed an amendment to the Senate immigration markup that would arguably harm American workers. In fact, it wasn’t just Democrats and labor unions that opposed this amendment; Republican Sen. Charles Grassley also opposed the amendment. But Democrats nonetheless backed the change in order to woo Hatch’s committee vote. Meanwhile, not only was Hatch’s committee vote not needed to approve the bill but Hatch has explicitly said he may still not vote for the legislation unless other changes are made. In other words, Hatch got to water down the legislation and Democrats got, er, well… nothing.

By comparison, the chair of the Judiciary Committee, Sen. Patrick Leahy (D-Vermont) proposed an amendment that would let lesbian, gay, bisexual and transgender Americans sponsor their same-sex spouses for purposes of immigration visas. Republicans threatened to pull their support for the entire legislation if this amendment stood. And so Democrats on the committee and, reportedly, in the White House, publicly and privately pressured Leahy to withdraw his amendment.

“I don't want to be the senator who asks people to choose between the love of their life and the love of their country,” said Leahy, articulating the sort of principles for which Democrats recently purported to stand firm.

“I don't want to blow this bill apart,” said Sen. Diane Feinstein (D-Calif.). “This is the wrong moment, that this is the wrong bill,” said Sen. Richard Durbin (D-Ill.).  Feinsten, Durbin and others articulated the cowering spinelessness that Democrats now seem to embody.

In case you didn’t know, there are ten Democrats and eight Republicans on the Senate Judiciary Committee. And, by the way, Democrats hold the majority in the Senate. However, Democrats preemptively watered down their own legislation in the face of Republican threats and a fear that an immigration reform bill that actually reflects ideals of equality and inclusion might not be popular enough with the Republican-dominated House.

With Leahy’s amendment for same-sex couples included, in spite all of the threats flying around, the bill would have still likely cleared the Judiciary Committee since all of the Democrats on the committee have voiced support for the bolder step of marriage equality. That is, unless the Democrats on the committee would have preemptively voted the bill down because of political calculations. Still, if the concern was the broader palpability of the legislation, Democrats could have waited until the Senate floor debate or even until a proposal came up for consideration in the House or even until legislative differences were hashed out in reconciliation to concede and compromise. But no, Democrats in Washington like to fold early and often.

From a political perspective, Republicans need immigration reform more than Democrats --- a significant reason Republicans are supporting any version of reform is the demographic tea leaves of an increasingly Latino electorate which has had no substantive reason to support the Republican Party up until now. Still, Republicans like Orrin Hatch are willing to hold the entire legislative process hostage for a proposal that is arguably a give-away to the sorts of global mega-corporations that are driving down wages and opportunities for workers in America and elsewhere. And Democrats can’t even stiffen their spines to support fairness and equality for gay couples in immigration reform — a move that, incidentally, two-thirds of Latino voters support.

When Republicans stand strong on principles while Democrats obsess about political practicality, Democrats repeatedly concede too much and Republicans repeatedly win more than policy and politics would otherwise dictate. The immigration reform markup is only the latest example of this larger, depressing state of affairs. Maybe it’s time for the Democrats to remember their safe word. Might I suggest “ENOUGH!”?