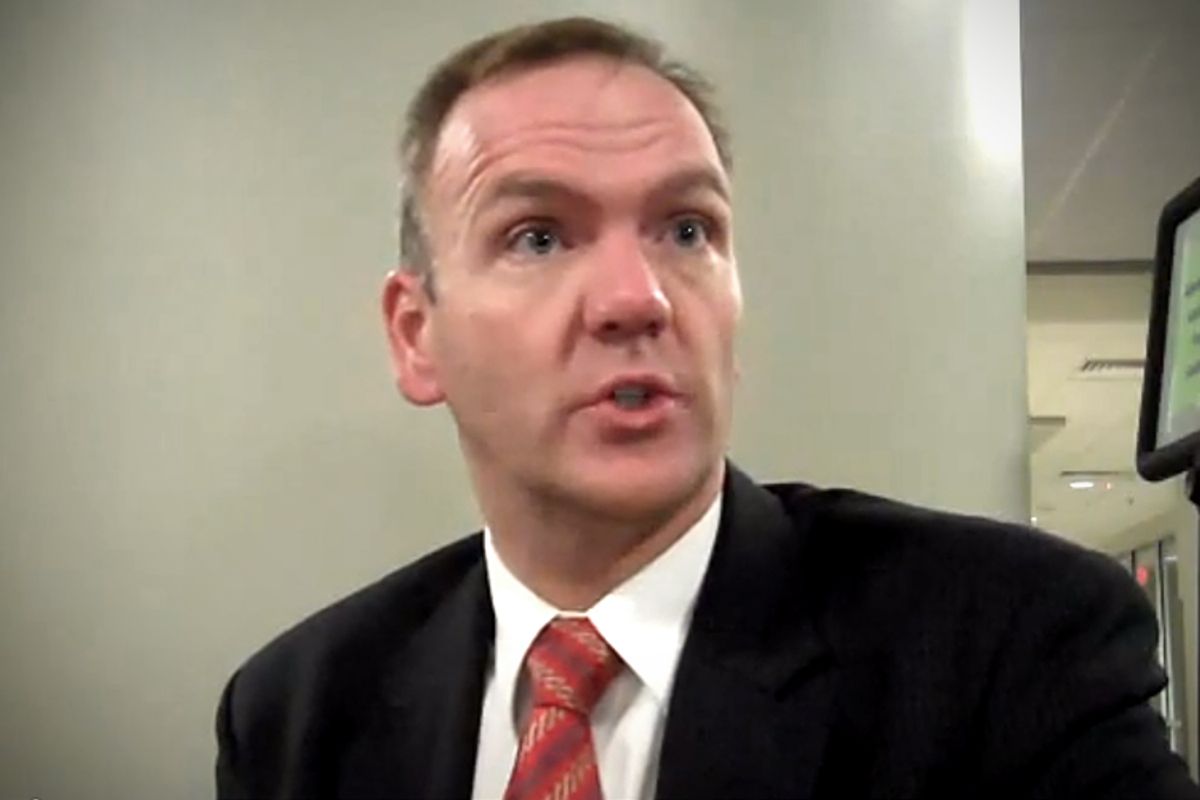 A few weeks ago, Dallas Judge John Roach told Page Price she had to move out of her partner’s house in 30 days -- or else that partner of three years, Carolyn Compton, would lose custody of her children. The judge's reasoning? They aren’t married.

Compton’s ex-husband, Joshua, who had once been charged with stalking her (he pleaded guilty to a lesser charge) had asked for enforcement of a "morality clause" in the couple’s original divorce decree, which bars overnight guests who aren’t related by blood or marriage while the children are there. Of course, as a lesbian couple in Texas, they can’t be married. Never mind the fact that their children “are all happy and well adjusted,” according to Price.

Faced with the choice between Compton's children and sharing a home, the couple has said they will reluctantly follow the order, though they believe it to be unconstitutional.

They aren't alone in their predicament. So-called morality or paramour clauses aren’t explicitly limited to LGBT people, though courts once considered the mere fact of homosexuality reason enough to separate parents from children. For years, and as recently as the past few months, multiple courts, usually in red states, have ruled that unmarried sexual relationships, regardless of the genders involved, are grounds for denying custody, regardless of whether there's evidence of harm to children.

Of course, straight couples in that situation can legally marry -- that’s what a Plano, Texas, man described by the Dallas Morning News did after a family court refused to sanction his unmarried relationship under his divorce's morality clause. And as gay rights activists have long pointed out, since gays and lesbians still can’t get married in most states -- including and especially, for the foreseeable future, Texas -- this amounts to particular discrimination against them. Meanwhile, the places with the highest percentages of same-sex couples with kids also happen to be the ones with the laws most hostile to them -- from Mississippi to Salt Lake City, according to a recent analysis by the Williams Institute -- often because those parents had prior heterosexual relationships.

LGBT parents have been fighting discrimination in custody proceedings at least since the 1970s, when the court's reasoning often assumed that gay people were molesters. (One judge worried that a man’s pubescent sons would be victims of their own father’s “overt or covert homosexual seduction.”) The most famous case was the Bottoms case in 1991, in which a Virginia grandmother who was “sickened” by her daughter’s lesbian relationship was granted custody of a 2-year-old boy, despite the fact that the daughter, Sharon Bottoms, testified that her mother’s live-in (male) companion had molested her hundreds of times as a child. Nevertheless, Sharon Bottoms was ruled to be an unfit mother after the judge “forced Sharon to explain on the witness stand what lesbians do in bed,” according to the Advocate. “Sodomy” was illegal in Virginia at the time.

Nor are such cases relics of the past, though the language used might now be different. In 2012, a Kentucky judge awarded custody to the ex-husband of a lesbian mom, because she was “seeking to live an unconventional life-style that has not been fully embraced by society at large regardless of whether or not same-sex relationships should or should not be considered sexual misconduct.  Like it or not, this decision will impact her children in ways that she may not have fully considered and most will be unfavorable.” Happily, a higher court shot that down: “Legally, we conclude that being a member of a same-sex partnership alone does not meet the criterion for sexual misconduct.”

And of course, in some states, marriage equality allows couples who choose to marry to be considered acceptable parents. But using marriage as the dividing line has its pitfalls. They first engendered opposition in the 1970s, according to Nancy Polikoff, a professor of law at American University Washington College of Law: “If you had a mother who had a sexual relationship with a man she wasn't married to, she was considered unfit and she lost her kids,” Polikoff says. “It began changing in most cases to require some proof of harm to the child,” also called a nexus test.

But in more conservative states, that's not a relic of the past. Last year, in Alabama, a higher court actually held that it was OK to deny custody to a woman who wasn’t yet married to a man she called her fiancé, as well as take into account whether she was sufficiently religious.

During the trial, the lawyer for the woman’s ex-husband asked her on the stand if she thought she was “sending the wrong signal to your children with [her fiancé] living in the household and being in bed with you at night.” She was also asked whether she took the child to church. According to the decision, “The mother stated that she considered herself a Christian but that she had not taken the child to church for ‘about a year’ because she had not found a church in which she was comfortable."

Both those facts were considered fair game to judge the woman’s fitness as a parent. In December 2012, the Alabama Court of Appeals held that a court “may, in an initial custody determination, consider a parent's sexual conduct as it relates to that parent's character, without showing that the conduct has been detrimental to the child."

All this is one reason why Polikoff, a longtime critic of marriage, says the takeaway from the Dallas case shouldn’t be that gay people should be able to marry -- it should be that marriage shouldn’t matter at all. Instead, courts should solely examine whether a parent's relationship harms a child. That's already the case in states that adopted the nexus test, looking at how parental behavior impacts kids' well-being.

“The idea among same-sex couples that those who marry are suitable to raise children and those who aren't married are not -- it's taking what was a view of sexuality and relationships from generations ago for heterosexuals and grafting it onto a world of people who have not constructed families in that way," says Polikoff. "All the decades that many of us have been fighting against the restrictions for gay and lesbian parents, the issue hasn't been that they can't get married. The issue has been that parents should be able to raise their children as they want as long as there isn't something harmful to the children.” She added, “If someone is bad for the children, it's not going to cure it if they're married.”

There is some record of success in challenging such clauses. Angel Chandler had been with her partner for 10 years when a Tennessee trial court imposed a paramour clause forbidding her partner to stay when the kids were there. With the help of the ACLU, which pointed out that a psychologist found the partner to be a “positive influence in the children’s lives,” Chandler won the right to not have to choose between custody of her kids and living with her partner. (She had to ask twice, though, and won twice.)

Occasionally, such family court restrictions can have unintended consequences. "In my child custody papers it states that no one of the opposite sex is allowed to be in the home after a certain hour,” one woman wrote in the comments of a Dallas Voice piece on the Compton case. “I laughed when I read that being I have no interest in the opposite sex."