Coachella, Bonnaroo, Lollapalooza and the Austin City Limits festivals have something in common: very male lineups 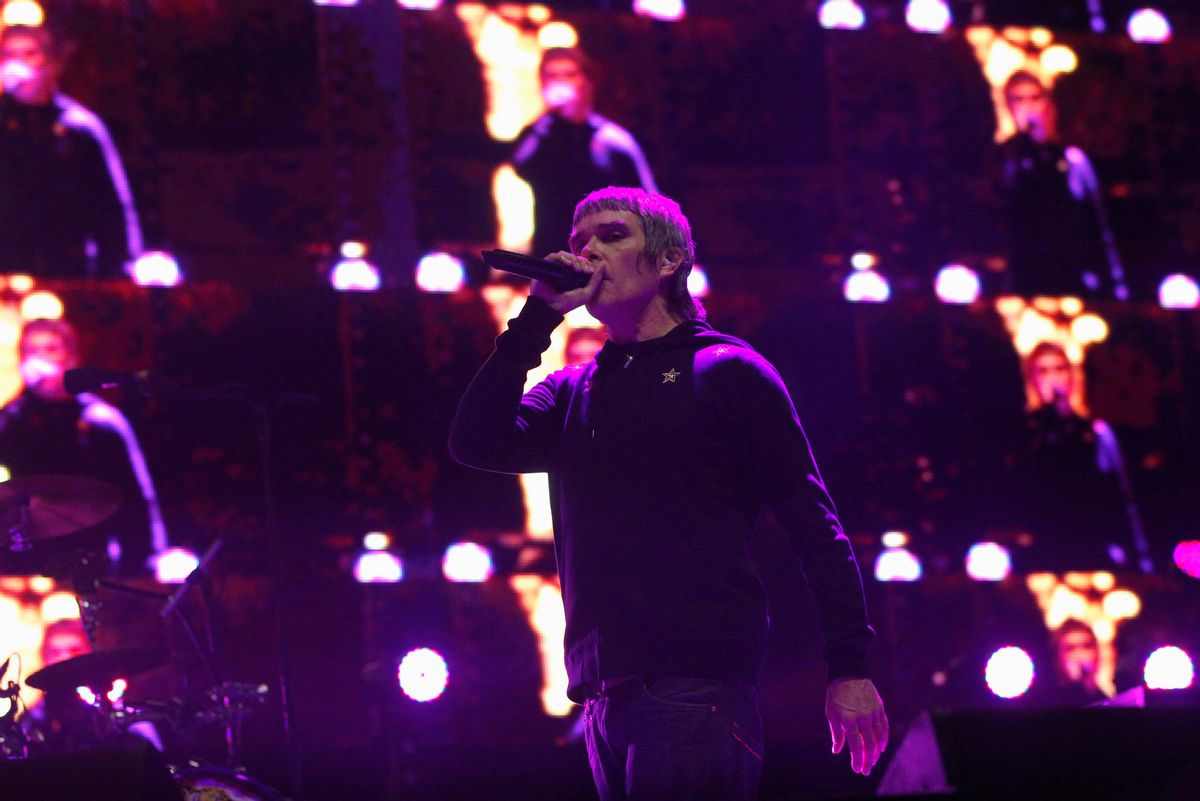 Texas had just shaken off the last bits of a chilly spring. The elegant Austin City Limits Live’s Moody Theatre was packed in anticipation of a concert by the hot French band Phoenix. Producer Terry Lickona took the stage to give the customary warnings about cellphone usage during the TV show taping, and managed to whip what can be an austere crowd into a frenzy.

“You know what happens at 12:01 tonight,” he said to a flurry of preemptive cheers.

They did: The lineup for the 14th Austin City Limits Music Festival would be released in the wee hours of the morning. No doubt many members of the crowd fought sleep in anticipation of poring over a lineup of heavyweights fit for the festival's debut as a two-weekend affair. The Cure, Depeche Mode and Lionel Richie ultimately crowned the six-day bill, topping a collection of burgeoning acts and festival veterans.

But many waited until that Thursday when a full-page lineup ran in the local alt-weekly. The now iconic poster-style preview sorted performers into their slots in the hierarchy, the name’s size speaking unabashedly to its relevance. The ad provided a visceral glimpse at the lineup’s fatal flaw. Scanning the lines of the text block, seven lines down and 23 worthy names in as the shrinking typeface sent some scrambling for reading glasses, was ACL’s first female performer. Claire Boucher, who topped 2012 best-of roundups under nom de plume Grimes, was obscured by a flood of men. (Kings of Leon, MUSE, Wilco, Vampire Weekend, the National, Fun., Arctic Monkeys, Franz Ferdinand, just to name a few, in addition to the headliners.)

The snubbing of women in booking major festival lineups is persistent and unfortunate, but nothing new. Even at the festival's most progressive early stages like Woodstock, estrogen has taken a backseat to a largely male cast. It drove women to ultimately create spaces like the now-defunct Lilith Fair, a rallying cry for billing inclusion. Despite this middle finger to the industry, the message fell on deaf ears as year after year male-centric lineups continue to dominate.

(The story is common across artistic fields: VIDA has chronicled how books by male authors are more widely reviewed than women. And a new USC report shows that women with speaking roles in major films is at its lowest point in five years -- a shockingly low number of just 28.4 percent.)

A survey of five major festivals’ 2013 offerings — Bonnaroo, Coachella, Lollapalooza, Outside Lands and ACL — revealed that 71 percent of the total bands were all-male outfits, with all-female (mostly female solo artists) only claiming 9 percent. Bands dominated by men, but with at least one female member, represented the second largest group at a scant 13 percent.

Over the last five years, the average of all-male bands in these festivals hovered from 70 to 75 percent, hitting its peak in 2010. C3, the producers responsible for booking both Lollapalooza and ACL, would not return numerous requests for comment.

Are these numbers really an accurate reflection of the number of male recording artists? Through my research, the consensus is largely that it is not. I could book an entire festival using the tome of suggestions I received for both iconoclastic femme headliners and up-and-coming acts. Looking for a resurgent legend like Richie? Joan Jett, Pat Benatar and Patti Smith have all been on the road in 2013. Trailblazing four-piece Savages are spending their summer at home doing festivals across the Atlantic. Dixie Chicks leader Natalie Maines has a new album and will be gigging with her old band this summer. Why, then, have these festivals become such a boys' club?

Paul McCartney, Mumford & Sons, Wilco, the Cure and Phoenix are all tapped as headliners across multiple festivals, as are perennial circuit favorites the Red Hot Chili Peppers and Grizzly Bear. While Karen O & Co. took the Yeah Yeah Yeahs to Coachella and soon to Outside Lands, the only woman to claim a 2013 headlining spot for herself at one of the five major festivals is Bjork at Bonnaroo.

“Joan Jett said every day there was some kind of asshole making a comment or underestimating them. A lot of this was what the Runaways faced 30 years ago with the way women are treated, and this indicates to me that things aren’t much better,” said Evelyn McDonnell, whose book about Jett's early band, "Queens of Noise: The Real Story of the Runaways," will be out in July.

McDonnell, a longtime rock critic who has spoken against sexism in the music industry, believes the problem stems from something much larger.

“I certainly don’t think it’s because booking companies are saying, ‘Oh, we’re going to put women at the bottom of the lineup,’” she said. “The men of power who are in this industry have this internalized, institutionalized sexism. They see men as having economic power and therefore get billed.”

The festival season began with the largest and worst offender, Indio’s Coachella Valley Music and Arts Festival, which showed 80 percent of its lineup were bands composed entirely of men. Julianne Escobedo Shepherd, whose byline has appeared in Rolling Stone and Spin, is a member of the Yahoo group frankly titled “The Girl Group.” Coachella’s gender imbalance did not go unnoticed by the group’s members, a collection of writers and editors working in music journalism.

“What it really comes down to is that booking companies either don’t care or think about the fact that everyone they are booking are men,” she said before heading out to cover the Electric Daisy Carnival for Rolling Stone. EDC, she pointed out with a sigh, had only three women booked over two days.

“If you look at Pitchfork’s festival, this year’s fest is a good percentage of women. That maybe hasn’t always been the case, but I venture to say that has a lot to do with the fact that in the last couple of years Pitchfork has hired more women than they ever have.”

Whatever the cause, Pitchfork’s upcoming festival in Chicago’s Union Park boasts Bjork, Solange, M.I.A. and Joanna Newsom in the upper echelon of its lineup, slating the Icelandic singer at the top spot. Shepherd said that with more women as music writers, a model like Pitchfork’s could be achieved across the board.

“There needs to be more gender equality within music journalism and what people cover and find. I think that once you get more women into your zones, maybe they will press more for booking women,” she said. “It’s possible for festivals to be booked with gender parity.”

No one believes that booking companies like C3 are made up of scotch-and-cigar misogynists. But the flouting of women in festivals, whether intentional or not, speaks to the pervading sexism present in an industry still largely dominated by men.

In a seemingly unattainable feat, Los Angeles duo Deap Vally secured a spot on all five of the lineups I looked at in 2013, one of only a handful of all-women groups. Drummer Julie Edwards looks at the sexist attitude as an unintentional positive.

“The staff takes one look at you and is like, ‘Oh, great, here we go, this is going to be terrible.’ And then it turns out you were this fully intentional musician. Even though it's messed up, if you can open people's eyes, you can change their minds,” she said.

But the industry’s failures on sexual politics aren’t lost on Edwards. We chatted about objectification, Grimes and getting past the “T & A” aspect of women in the music industry. But she stopped me when I threw out the word "feminism."

“'Feminism,' like the word 'girl band,' they somehow all leave a bad taste in your mouth. You want to differentiate yourself from them and somehow in case they are bad words,” she said. “I think that is messed up. I think that newer models for feminism need to exist and that we should interpret it any way we choose and still be taken seriously.”

Maybe she was right to stop me. Gender parity on festival lineups shouldn’t be a feminist issue; inequality so obvious shouldn’t be lost on anyone, a feminist or otherwise. But women remain at the mercy of the industry until there is enough will to effect change, something that will take diligence from the top down, rather from the bottom of the lineup.