Nobody "needs" to rape 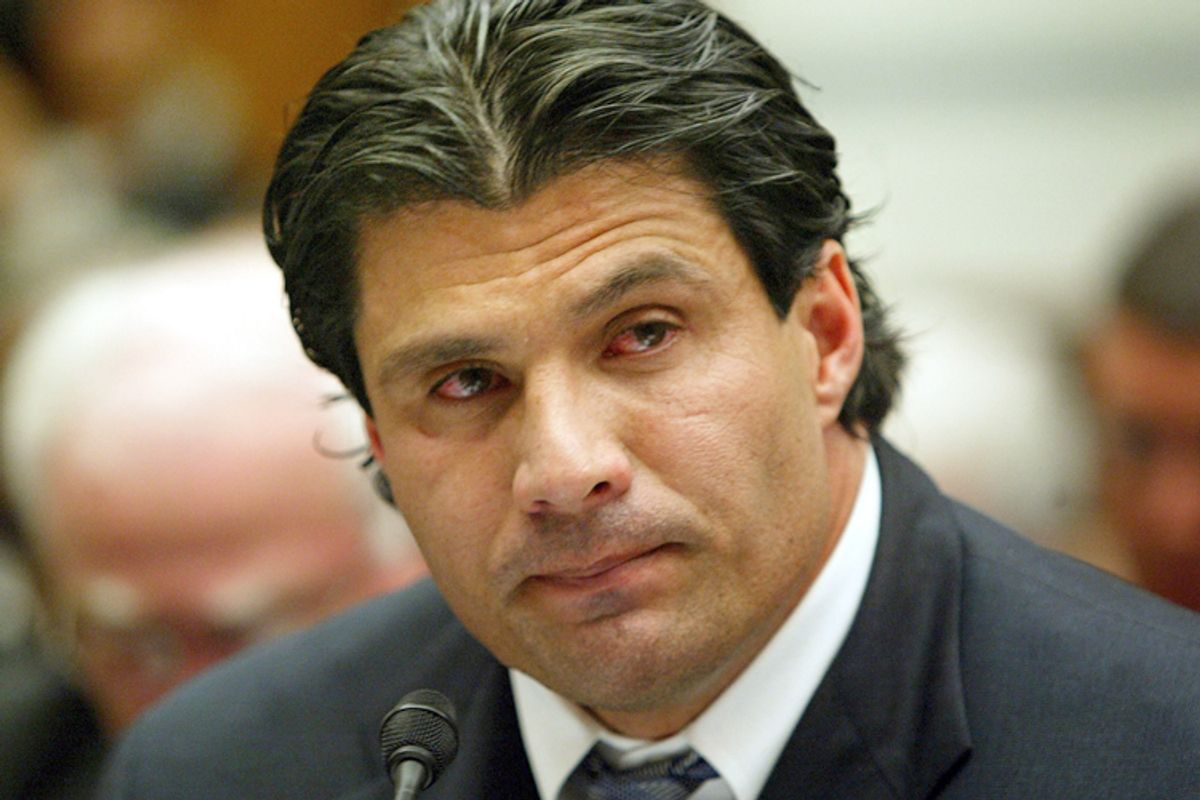 This isn't about whether or not Jose Canseco is guilty of the rape that he was accused of earlier this week, an incident that is currently being investigated and for which he has not been charged. This is, instead, about something else. It's about the narrative that unfolds in the wake of an accusations of sexual abuse – and how ridiculously screwed up that tale too often is.

The controversial former baseball all-star set the tone with a bizarre series of tweets in which he announced the charge, named his accuser and said the woman "told the police that I druged her and then raped her.hmmmmm.lets find out what really happened." [sic] He subsequently deleted the tweets, but he did leave up the cryptic message, "Sometimes your mind says yes and your body doesn't. Hate that."

Canseco later went on to explain to reporters the impossibility of the allegation. "You guys don't know me at all," he said, "but my close friends, my ex-wives, my ex-girlfriends will testify on my behalf that the way the media's portrayed me, and the way they're trying to portray me here, it's not even close to being me." Perhaps, but Canseco might not want to count on testimonials from his former spouses. In 1992, he was charged with aggravated battery for allegedly ramming his car into a vehicle driven by his wife Esther and then spitting on her car. And in 1998, Canseco pleaded no contest to a charge of domestic battery for hitting his wife Jessica.

More peculiar, however, was Canseco's assertion to reporters that "I don't have to rape a woman. I think it's ridiculous." Here's the funny part. Guess what? Nobody has to rape a woman. There is literally no person in the world who has to be a rapist. And you know what else? Rape is not committed by lonely guys who clearly have no other sexual options but to go out and rape. Rape is not, amazingly enough, committed because a man is not as well-known or formerly successful as Jose Canseco. Just ask rich and famous athlete and convicted rapist Mike Tyson. Or handsome footballer and convicted rapist Ched Evans. Rapists can be and often are guys who just dig raping. Yet the idea that a man who can get a woman willingly would not assault one forcefully is one of our biggest, most idiotic lies, one that's been trotted out again and again whenever a high-profile man is accused of something heinous. He couldn't! He doesn't need to!

And after it's been established the man in question couldn't do it, what happens next? Come on, you've seen this movie before, you know the answer. It becomes the story of a woman not to be trusted. As TMZ gleefully reported Friday, hours before the alleged incident, Canseco's accuser posed for a "very flirty pic" with him, "cozying up for a couply shot with her open right hand placed on the center of his exposed chest." It gets even more damning. She "giggled" and joked to the photographer that she and Canseco had just gotten married. The Hollywood Gossip, meanwhile, noted the lady's "short, tight blue dress."

See? She is totally unrapable. Also, Canseco's ex-girlfriend Leila Knight would like to point out that the woman is an "aspiring actress." And there's no better "publicity stunt," to use Knight's words, than being known as the woman who accused a man of raping her. Those chicks get all the best work.

The truth of what happened between Canseco and the woman that night may never fully be known. What is known, however, and needs to be repeated again and again, is that wearing a tight dress and being an actress do not make a woman immune to rape. Absolutely none of those things have anything in the slightest to do with consent. Being friendly has nothing to do with consent, either. Eighty percent of rape victims are raped by someone they know. Smiling and joking around are not evidence that a rape could not possibly have occurred later. Talk to a few people who've been raped sometime; you won't have to ask around too long before you get a story that started out as a seemingly good night.

So as the Canseco story moves forward, and the next time a similar one unfolds (it's a safe bet you won't have to wait too long), let's remember a few things. The outcome of a rape investigation is based on the evidence. But being a former athlete doesn't mean you don't "have" to rape. And wearing a short dress doesn't mean you're a liar.