Why settle for the latest Dan Brown, when you can while away the dog days with these stylish page-turners? 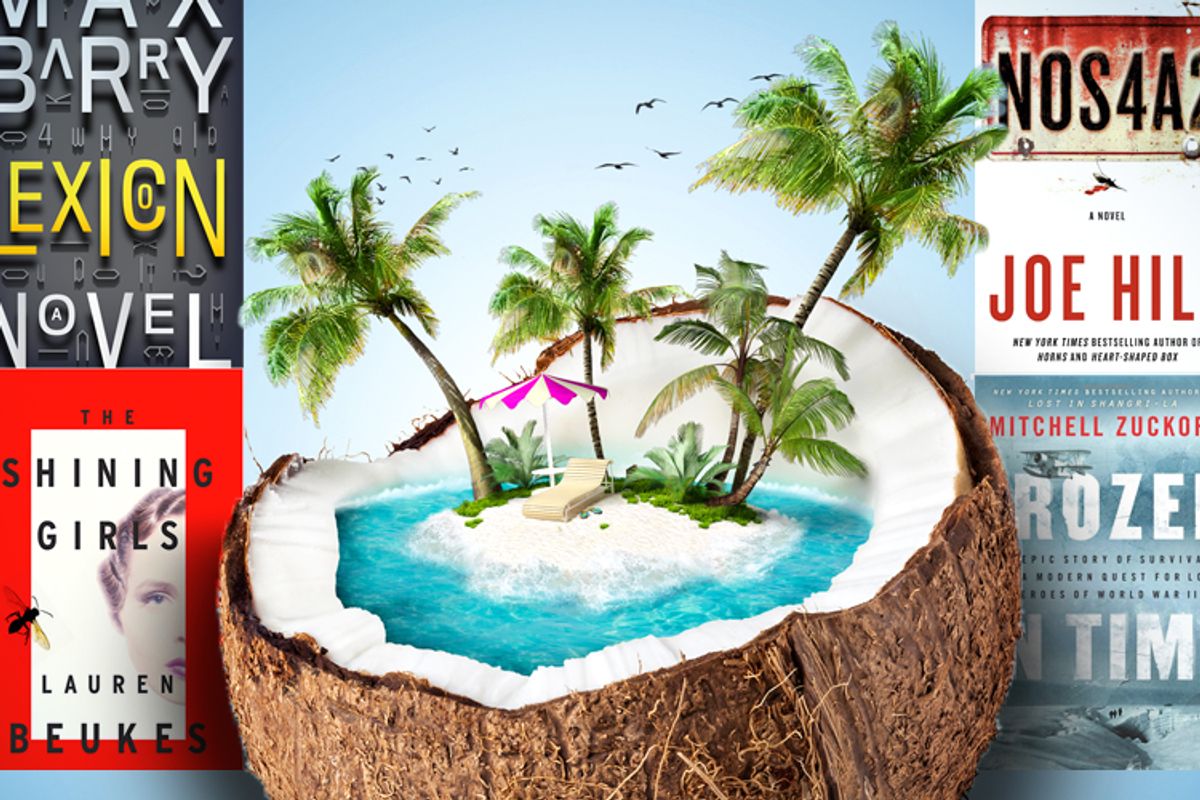 Step away from that Dan Brown novel! Better yet, don't let summer's distractions lead you to consider picking it up in the first place. Take our advice now and you won't find yourself scanning the shelves of dispiriting airport bookshops and beach-town drugstores before settling on yet another routine thriller. Contrary to what some mega-selling authors seem to believe, not every page turner has to be packed with ham-fisted clichés, wooden characters, pointlessly frenetic action and cheesy dialogue. Somewhere between Brown's "Inferno" and "War and Peace" lies the sweet spot where literary quality mingles freely with crackerjack storytelling.

Here are seven handpicked titles, chosen from this summer's crop of new books, each one offering a story you'll be tempted to finish in a single day. Maybe, if you're lucky, you'll even get the chance to do just that, under a tree, on the beach or in the air. It is summer, after all. Ordinarily, it would seem bad form to liken Joe Hill's fiction to that of his father, Stephen King, given that Hill has clearly adopted a pen name to avoid such comparisons. But "NOS4A2" (a license plate and a pun -- try saying it out loud) is something of a King homage, featuring several of the horror master's classic motifs: a demonic car, beleaguered working-class heroes, alternate dimensions, victimized children and the creepy deployment of popular music. The result is uncannily like one of Stephen King's best epic novels (which can't be an easy thing to pull off, or a whole lot of other writers would have done it by now). The main character, Victoria "Vic" McQueen, is among a rare subset of people able to manifest an aspect of her inner world in material reality; in Vic's case, it's a covered bridge that transports her to the location of anything lost. Another character is an eccentric librarian with a bag of prophetic Scrabble tiles, and the villain can suck people into a deliciously ghastly, Christmas-themed hell. These feats come at a cost, however, and one of this novel's strongest elements is its grounded depiction of damaged people struggling to hold their lives together. Hill's prose is supple and polished, and the supernatural structure behind the story (too often the ricketiest and least persuasive aspect of King's books) feels rooted in psychology rather than a cosmic battle between good and evil. Anyone who spent an adolescent summer devouring "The Stand" will find this a particularly gratifying venture into territory both a little bit familiar and strikingly fresh. (May) Zuckoff applies the formula of his bestselling 2001 book "Lost in Shangri-La" -- the true story of the crew of a WWII plane downed among isolated tribesmen in a South Pacific jungle -- to a drastically different environment: the ice cap of Greenland. In the fall of 1942, a military cargo plane crashed in that brutal landscape, and two aircraft sent to rescue the survivors went down soon afterward. At one point, nine men sheltered from sub-zero temperatures and blinding storms in the hull of a broken B-17 while Army and Coast Guard pilots and sled crews tried to locate, supply and retrieve them. On top of the crippling cold and the blizzards, the terrain featured seemingly bottomless ice crevasses (where pieces of the glacier were in the process of splitting off into the sea) covered by deceptive snow "bridges" that looked solid but could collapse at any moment. Zuckoff cuts back and forth between the WWII narrative and the story of a modern-day team (including Zuckoff himself) attempting to find and recover one of the lost planes, now submerged under 35 feet of ice. But the heart of "Frozen in Time," as with "Lost in Shangri-La," beats in Zuckoff's thrilling descriptions of the ingenuity and daring of the pilots and survivors of the 1940s, as they battle the elements, the limits of their own equipment and the mental effects of isolation and deprivation in the notoriously unforgiving Arctic. (May) Time travel and serial killers: two fictional motifs that so often disappoint for very different reasons. Beukes, however, has fused them into a soulful puzzle novel with an evocative final twist. The killer, Harper, a lost man from the Great Depression, stumbles into a Chicago row house that, when exited again, will deposit you anywhere between 1931 and 1993. Harper jumps the decades in search of his preferred victims, girls and young women he perceives as "shining"; they are in fact burgeoning artists, scientists and activists, and the glow he sees is a visual manifestation of their promise. As Harper views it, he robs the future to fuel the house and his own, consequence-free femicidal jaunt through history. The heroine of this story is (thanks to her dog) the only one of his victims to survive, and it soon becomes clear where her potential lies: in the ability to bring him down. Instead of fetishizing the killer and his deeds, Beukes' narrative offers snapshots of remarkable young women of many races, classes and talents at various points in Chicago's past: an architect; an African-American Rosie the Riveter; a guide for Jane, the underground abortion service collective of the 1970s; a Korean-American sociologist working in the Cabrini Green housing project -- all portrayed in tersely lyrical vignettes that convey just how much the world has lost in losing each of them. Beukes also makes shrewd use of the way time travel messes with causality, the novelist's stock-in-trade, leaving her readers with an intricate reflection on why any of us chooses to do what we do. (June)

Any casual student of neuroscience will know that language alters the very structure of our brains, and Barry takes that fact as the premise for his speedy, clever, dialogue-rich thriller about a secret society devoted to exploiting the power of words. They call their supreme adepts "poets" and give them the aliases of such famous writers as Virginia Woolf and T.S. Eliot. The novel's heroine, a homeless girl named Emily, catches the organization's eye while running a three-card monte scam in San Francisco; they look for individuals already skilled at reading and persuading people. In the poets' secluded academy, Emily and her fellow student learn to swiftly categorize people into one of 100-plus personality types or "segments," each one particularly susceptible to certain words and phrases. A full-fledged poet can use this knowledge to seize control of the minds and bodies of others. Part of the brilliance of this bizarre premise is that it's extrapolated from such realities as psychological classification and market research that customizes language to cater to and manipulate specific populations. In other words, "Lexicon" is only somewhat far-fetched -- until, that is, the characters stumble upon a word of outrageous and sinister potency and the race becomes one to rule -- or save -- the world. (June) Last summer, Gillian Flynn's "Gone Girl" showed readers just how much suspense can be generated by the politics of a disintegrating marriage. Harrison's novel about the sundering of a two-decade partnership is being marketed as a similar story. In truth, "The Silent Wife" has far fewer tricks up its sleeves, but it's still utterly absorbing, albeit in the vein of Ruth Rendell's pitch-black elucidations of the perils of self-delusion. Jodi, a part-time psychotherapist, and Todd, a successful contractor, are affluent, companionable and set in their ways -- one of those ways being Todd's many fleeting affairs and Jodi's determined refusal to acknowledge them. Harrison presents a masterful, and completely persuasive anatomy of the unspoken bargain struck between a philandering man and the complacent woman who wants to stay with him. When one of Todd's paramours, a girl half his age and the daughter of an old friend to boot, gets pregnant and demands marriage, it's as if she's extracted a single straw from a towering and only apparently stable edifice. The rest of the novel charts the fascinating slow-motion collapse of Todd and Jodi's interlocking self-deceptions into catastrophe and violence. The secret of this novel's spell lies not in ingenious twists but in its meticulous plausibility. You probably know -- and may even be -- someone very much like Todd or Jodi, which makes their relentless tick-tock toward doom all the more riveting. (June) They really don't make movie stars the way they used to, as this book, unfinished when Evans died last year, amply demonstrates. Gardner was the anti-Marilyn: a tough brunette who tackled life and Hollywood on her own terms, and mostly won. She accomplished this by not taking any of it too seriously, and her earthy wisecracks are legendary, as was her spectacular beauty. (If you want to know what all the fuss is about, watch her put the whammy on Burt Lancaster in "The Killers," the 1946 film that provided her breakthrough role.) In the 1980s, Evans, a British journalist and biographer, was recommended to Gardner as a ghostwriter for her memoirs. "I'm broke, honey," she told him. "I either write the book or sell the jewels, and I'm kinda sentimental about the jewels." The memoir never happened -- Gardner's ex-husband, Frank Sinatra, talked her out of it -- but for the better part of a year, Gardner treated Evans to remarkably candid late-night confessions about her husbands (Mickey Rooney, bandleader Artie Shaw and, of course, Sinatra, who never got over her) and lovers (Howard Hughes, whom she refused to marry, Ernest Hemingway, Robert Mitchum, George C. Scott and assorted matadors, for whom she had a particular taste), as well as her childhood as a sharecropper's daughter, her film acting (about which she was refreshingly unpretentious) and the devastating stroke she suffered in 1986. I could quote Gardner for pages, but will limit myself to one highlight: Recounting a bet she once made with Princess Grace, that London's Hyde Park "was bigger than her spread in Monaco," Gardner (who won) remarks, "Grace was tight with a buck, but she always paid up ... There aren't many people I miss, but I do miss Gracie Grimaldi." But not, perhaps, as much as the rest of us miss Ava Gardner. (July) Although it doesn't come out until August, Braffet's enthralling story of young lives unraveling in rural Pennsylvania is this summer's must-read. Patrick Cusimano and his brother Mike are local outcasts; their father has been convicted of killing a little boy while driving drunk, and the child's parents want them punished for not calling the cops on him right away. For his part, Mike blames Patrick for calling the police at all. Meanwhile, Verna Elshere, the 14-year-old daughter of a spotlight-hungry fundamentalist minister, negotiates public school for the first time. She's branded with a different stigma; her older sister, Layla, was the center of a lawsuit that resulted in the firing of a popular biology teacher. Now Layla's turned rebel and goth, hanging out with a clique orbiting around a magnetic boy who calls himself Justinian. Layla's also stalking Patrick during his night shifts at a convenience store. As Patrick and Verna wrestle with the restrictions placed on them by family and community, Justinian beckons with offers of a vague, sinister freedom waiting out in the woods. Braffet expertly captures the suffocating confines of small-town life and the desperation of its outliers, with prose that simmers and thrums. The convenience store is "like purgatory, with snacks"; attempting intimacy with Layla is "like sitting down to a fabulous meal and realizing all the food is plastic." And "Save Yourself" keeps upping the ante: Patrick falls hopelessly in love with his brother's girlfriend; Verna becomes the target of a vicious, technologically enabled bullying campaign. Nothing in this scenario is especially outlandish, but the tension Braffet generates becomes nearly unbearable, and the conclusion, when it comes, feels satisfying and thoroughly earned. (August)