I'm not harping on "Morning Joe" because it defines everything wrong with contemporary politics, though it does... 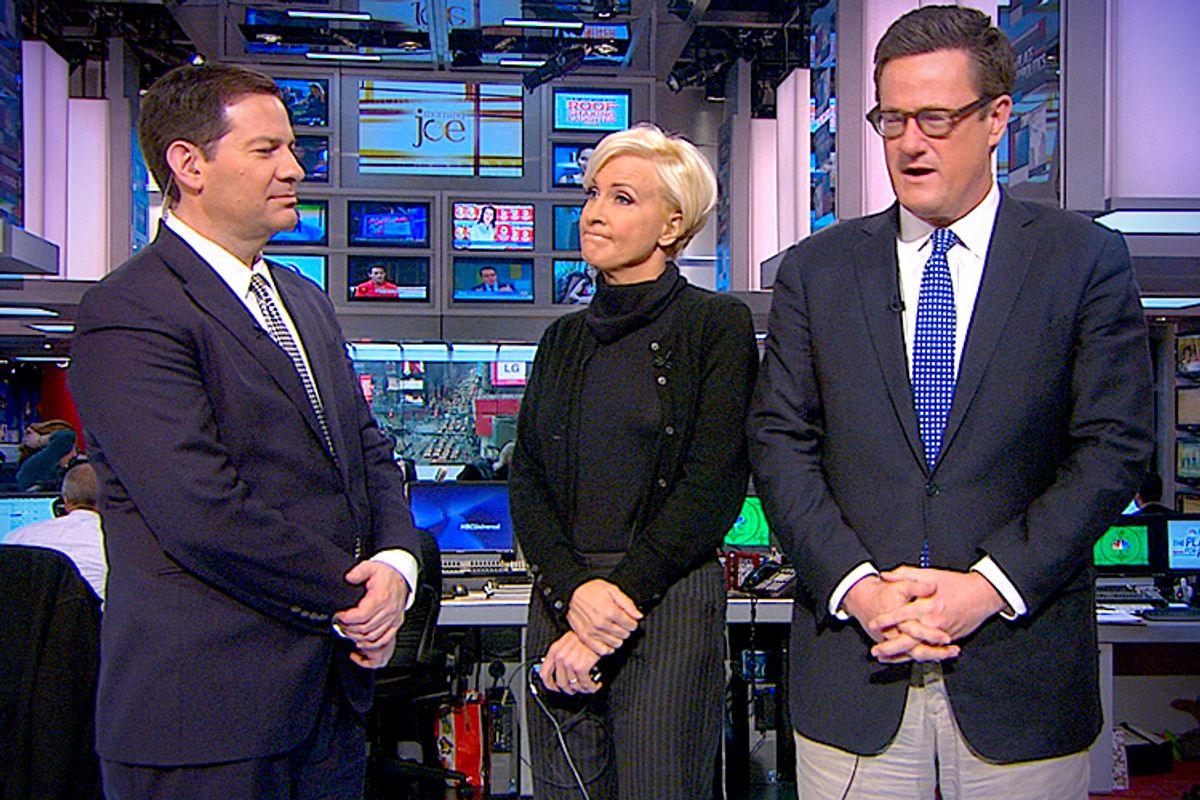 MSNBC is having ratings troubles. It came in fourth in April, after Fox, CNN, and HLN. Things have not improved in May. May 13-17 was MSNBC's lowest-rated week since summer of 2006. So what's wrong?

We should maybe state at the outset the "fourth place" thing isn't quite as bad as it sounds, because HLN has been doing insane ratings lately thanks mostly to Jodi Arias (and the channel's stunning shamelessness in general). HLN is regularly kicking CNN's ass, too. But it is still pretty bad, considering that last year MSNBC was challenging Fox for ratings dominance some nights. Now, it's once again far behind the conservative cable news leader. And worse, CNN has finally, apparently, caught up.

One theory, from Deadline Hollywood, is that MSNBC is suffering because Obama is suffering. The crazy scandals we all love hearing about so much are making liberals too dispirited and depressed to tune into their favorite liberal shows, I guess.

Conservatives tend to like this theory. Liberal things failing (Air America, the Current) is usually taken as a sign, on the right, of the broader failure of liberalism. Various right-wingers have been crowing about MSNBC's ratings woes, with, for some reason, lots of conservatives piling on Chris Hayes, whose new weeknight prime-time show hasn't been a runaway ratings success. (I have no clue why the right hates Hayes, especially considering that part of his whole deal is that he regularly asks conservatives to appear on his show and then engages with them civilly. He's not O'Donnell!) Liberal media just aren't popular, the right cackles, as they also accuse all non-explicitly right-wing media of being radically left-wing.

While Hayes' show isn't doing great, the real poster child for MSNBC's struggles ought to be someone whose show actually does much worse.

"Morning Joe" is the lowest rated of the big three cable news morning shows in both total viewers and the younger demographic. Fox News' Red Eye -- a show Fox airs at 3 in the morning -- had more total and 25-54-year-old viewers in April 2013 than "Morning Joe" did. "Morning Joe" in April 2013 was down, from its April 2012 numbers, in total and in young viewers by a greater percentage than the rest of the network as a whole.

I'm not harping on "Morning Joe" because I think the show is representative of everything wrong with contemporary political elite thinking, though it is, but because it illustrates MSNBC's larger problem: It's a political talk show. Every other TV morning show is mostly fluff and weather. "Morning Joe," instead of entertainment news updates, has a former member of Congress wave a newspaper at Mark Halperin for a while. MSNBC's target audience may just be much less interested in listening to people talk about politics in spring 2013 than they were during an election year.

It's simplistic to say that viewers aren't watching because the president's having a bad news cycle. Bad news is often good for ratings. Liberals like to watch Republicans portrayed as big scary meanies when they're not watching them be presented as inept nutso clowns. There was no such thing as liberal cable news during the Clinton impeachment, but if there had been I guarantee it would've been a hit. Maybe -- maybe! -- some viewers are tuning out because they're not hearing enough of an unqualified defense of the president and his administration from some of MSNBC's more left-leaning voices. But I'd guess that's still not enough people to make a huge ratings difference.

Perhaps there just isn't a huge, permanent, year-round liberal audience for political news and discussion. Which is effectively all MSNBC does, because political discussion is cheap as hell, and gets good ratings when certain periods and certain personalities align. Young liberals tune in during election years. The rest of the time they keep up with the news online (or on "The Daily Show") and spend their evenings watching actual TV. Like, "Game of Thrones" and stuff.

(Though it may be old people, and not the youngs, who are more to blame. MSNBC's April 2013 showed no drop-off in 25-54-year-olds compared to April 2012, though the network's total viewership declined. "Old people" are also, probably, the demographic that most misses thick-necked loud-talking Midwestern talk radio veteran Ed Schultz.)

As MSNBC suffers from post-election indifference to politics, Fox is fine because it is one part tabloid news (Arias!) and one part right-wing anger-stoking machine. The right-wing anger-stoking machine never shuts down. Talk radio turned it into a perpetual motion machine a generation ago. There's no boom and bust, just steady, money-making rage. (Though, you know, as angry old people die the model may start to show some cracks.)

Meanwhile, CNN's been given gift after gift by whichever minor demons are responsible for the creation of cable news stories. The channel's new Zucker-approved softer focus and lack of dignity allowed it to capitalize on Jodi Arias nearly as much as its trashy sister station HLN did. The Boston bombings were a perfect CNN story, even if CNN botched the hell out of its coverage. The Dzhokhar Tsarnaev manhunt was precisely the sort of story that makes people go through their channel guides trying to remember which one CNN is. And then there was the West, Texas, explosion. CNN capitalized on all of this because CNN's brand is "breaking news." Fox capitalized because there are simply a whole bunch of people out there whose TVs are tuned to Fox basically all the time. MSNBC's brand is "people either talking calmly or yelling at you, or each other, about politics." These weren't stories that made people think, "What does Chris Matthews have to say?" (Another problem: During huge stories, like the Boston bombing and subsequent manhunt, MSNBC frequently finds itself in the odd position of competing with its own sister network, when NBC News takes over the broadcast network.)

MSNBC is actually making some good decisions, lately, from the point of view of someone who'd like (talking head) cable news to be better. And anyone who says the network's failing because of liberalism should probably have to account for the fact that the channel's highest-rated show remains Rachel Maddow's. (Followed by O'Donnell, who really is the insufferable smug self-satisfied liberal caricature everyone thinks all of MSNBC is.)

But do you know who watches cable news all day? And at prime time? When there's not an election on, or a war, or some terrorism? Older conservative people. If MSNBC wants better ratings, it'll either have to train a generation to want to pay attention to political years all the time, or it'll have to produce a scripted show about zombies.