With weak rivals, lots of cash, and the impact of tabloids overrated, an upset is unlikely but possible. Here’s how 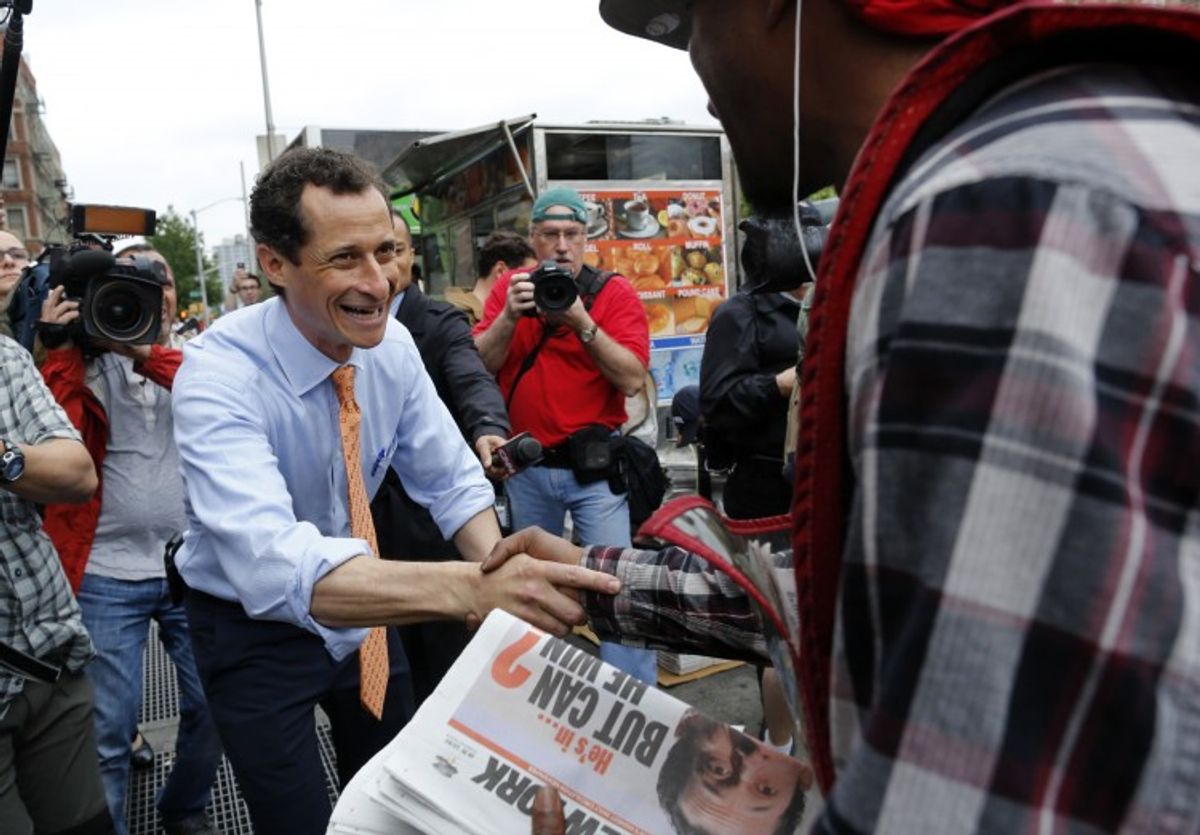 Anthony Weiner can "shake up" the campaign for New York City mayor, the conventional wisdom tells us, but he definitely cannot win it. That may be the consensus among those following the race, but the fact is Weiner’s chances are better than many realize. The reason: his challenges are not as great as they’re being portrayed. And his strengths are more important than people think.

Let’s start with what he has going for him. Most critically, Weiner begins this race possessing a prerequisite for an upset: the field of candidates he faces has failed to catch the attention of voters. The current frontrunner, City Council speaker Christine Quinn, leads early polls but none show her approaching the 40 percent mark needed to avoid a runoff, and she inspires intense opposition among many New York voters. Add to that the fact that other leading candidates like Bill de Blasio and Bill Thompson have failed to consolidate their bases of support, and you’ve got an unsettled race -- just the kind of backdrop essential for Weiner to have a prayer of winning.

Now, take that wide open race and throw into the middle of it a candidate with $5 million worth of campaign funds with which to advertise and build a GOTV operation. Incredibly, Weiner enters the race with the second largest campaign account because of money held over from previous campaigns – thus avoiding the fate of other banished politicians who encounter trouble raising funds for their comeback tours (remember Mark Sanford chose to run not for Governor this year, but local congressman, a race requiring far fewer resources).

The next asset Weiner brings to the race may be the most appreciated, and that’s his zeal and effectiveness as a campaigner. While some observers seem committed to a narrative that Weiner’s campaigning has been nothing but a "circus-like" sideshow, the reality has been something different. It’s been only a week or so since he’s entered the race, but by most accounts he’s thus far dealt with the inevitable questions about his scandal with skill, and engaged voters successfully. This should surprise no one who’s watched Weiner perform in the past. He’s a natural campaigner, who relishes crowds – and like a good standup comic, enjoys taking on hecklers and skeptics. That he might be able to persuade voters unimpressed with other candidates, to give him a second chance, has not occurred to many of his critics, but it should -- he’s the happiest glad-handler in the field.

Of course, there are also some real challenges to this candidacy (beyond Weiner's complicated record, which I've previously discussed here). The question is: will they be as insurmountable as the conventional wisdom says?

It's a safe bet that the fact that the former Congressman tweeted “intimate” photos of himself to various women over the internet who were not his wife, will not itself be a boon with many voters. Nor will the fact that he lied about it for days afterward. But the media consensus -- specifically, that a huge problem for Weiner will be the way the New York tabloid media will continue to amplify it -- may be overstated.

The Washington Post’s Chris Cillizza wrote on his blog, The Fix:

Weiner isn’t running for mayor in a quaint burg like Columbus, Ohio or Portland, Maine. He is running for mayor in the media capital of the world. The tabloid culture of the Big Apple coupled with Weiner’s unfortunate — for him — surname means that he will have to weather a series of splashy headlines

It’s true that the tabloids will try to one-up each other with penis puns. But two other things are also true. One, his scandal is a story that voters know already. Unless more developments rapidly unfold (which is possible), it’s a fairly static story at this point, about which voters have likely already made up their minds. If new details do emerge, we’ll find out whether New Yorkers are moved by – or eager to hear more about -- repetitive stories within a narrative that’s now two years old and pretty well understood.

The second, less appreciated truth about New York tabloids, is that many candidates serve as their target and still manage to win races in New York; they’re called Democrats. One of the great anomalies of the New York media scene is that the city’s signature tabloids often do not come close to representing the political views of their readers. The New York Post’s conservative slant – and the Daily News’ ideological promiscuity – are often at odds with the heavily Democratic, culturally heterogeneous city. In 2010, the city’s most recent year in which there was a crowded Democratic primary followed by a general election, liberal Eric Schneiderman was both tabloids’ least favorite candidate in both the primary and general elections for attorney general. Like other progressives before him (e.g., de Blasio, himself, who won the 2009 race for Public Advocate), city voters chose him in defiance of their beloved but out-of-touch hometown papers.

Yes, there are differences here. For one, the liberal reviled by the tabloids is often endorsed by the far more influential New York Times; Weiner probably won’t be so lucky. Second, obviously the degree to which Weiner will be targeted by the tabloids will dwarf anything we’ve seen in past races. These are critical differences that ought not be glossed over. But they don't change the fact that barring actual new developments, New York’s voters have a pretty good track record of seeing past their tabloids’ political agendas. In other words, if the papers dig up new details of the Twitter story, that could be a problem. But if they don't, and simply continue to slam him for it, the effect may well be mitigated.

So, in the end, what's it all mean? Anthony Weiner’s own assessment that he’s not a favorite to win this race is accurate, and such an upset is highly improbable. But the conditions are there for an unexpected outcome to occur. With an electorate that often surprises when there’s an open seat for mayor, Weiner’s rival campaigns should be taking him seriously -- even if the tabloids are not.