I panicked at first, but with time, my vision impairment allowed me to see things more clearly than ever before 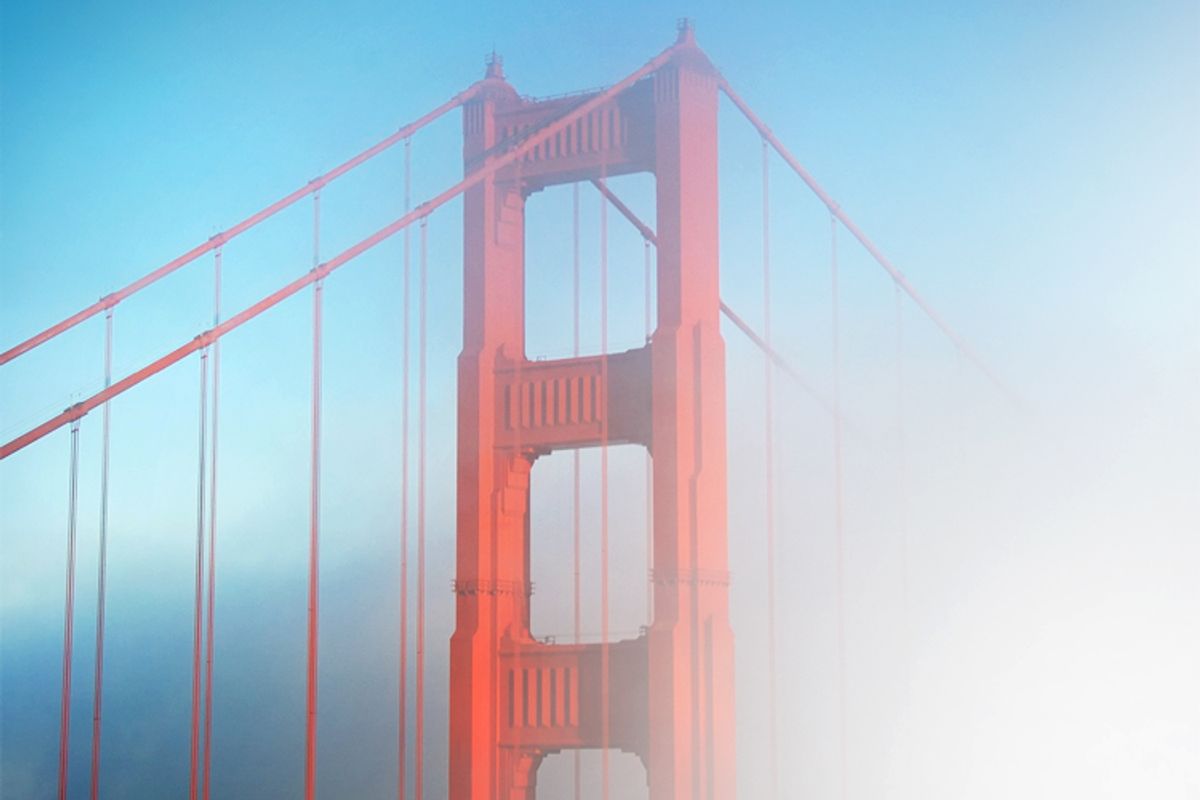 I can’t believe this is coming from me. I’ve been writing about how old age sucks for the last several years, and here I am – about to write what I’ve contemptuously called “feel-good drivel” when it comes from the pen (well, keyboard ) of others. No, I’m not taking back what I said before. Old age really does suck. But there’s nothing like the lived experience to give depth and dimension to what you think you know and feel, whether about getting old or any other of life’s experiences.

So why am I feeling so open-minded these days, so ready to roll with the experience instead of relying on what I thought I knew so well? There are probably several reasons – some known, some perhaps still opaque – but the event that triggered my most recent evaluation of life in the slow lane is clear.

I woke up one day and the world around me had lost much of its shape and color. I could see that there were paintings on the wall opposite my bed, even the outline of the image, but not the image itself. I could see the landscape outside my bedroom window, could make out the outlines of the Golden Gate Bridge and the entrance to the San Francisco Bay it spans, but only because I’ve looked at it every day for nearly a quarter of a century. I reached for the TV remote and flipped on the 52-inch screen on the wall in front of me. The picture was muddy and the closed captions, which I have running because my hearing has deteriorated with age (told you it sucks, didn’t I?), were barely readable.

What happened? I’d been largely bedridden for a week with a virulent case of the flu -- high fevers, a body full of aches and pains that, when I tried to get out of bed, passed out on whatever floor happened to be available. But until that morning, there’d been no vision problems. Well, there was my left eye, blinded by an autoimmune disease a little more than a year ago. But I’m used to that, I tell myself. There’s nothing wrong with my right eye? Or is there? Bewildered, I climb out of bed, make my way into my office and wake up my computer. It opens where I left it – my Outlook mail page. I know that’s what it is, but I can’t read it. My anxiety rises to near panic level. What if I go blind in the “good” eye, too?

I keep testing my vision in various tasks in different parts of the house, and become more anxious as I fail each test. How does one live without sight? I have no answer, but having been a practicing psychotherapist for almost four decades, I reach for a psychological one. It’s an occupational hazard. Cool it, I tell myself. It’s your anxiety talking.

I try to take my advice for the next couple of days, but by day three I’m too frightened to listen to myself or anyone else. I call my ophthalmologist, tell his assistant what’s going on, and he calls me back within the hour.

“Get in here right away,” he advises.

“Find a way; it’s important,” he insists. “If you can’t get here any other way, call the paramedics. Have them call me when you get to the E.R., and I’ll be there as soon as I can.”

I did that already once in this last week when I couldn’t move after passing out on my kitchen floor. That kept me in the hospital for a couple of days, and I didn’t want to relive that again.

So I call a taxi and get to his office. After the usual wait, his assistant fetches me, takes me into an examination room, and asks, “Why are you here?”

“Because everything is suddenly blurry before my eyes.”

She puts the familiar eye chart up on the computer screen in front of me, scrolls down to one of their test lines, and says, “Tell me what you can read.”

“No,” I say, “you don’t understand. I know it so well that I’m not sure whether I remember the letters or am actually seeing them.”

I can feel her trying to rein in her impatience as she repeats, this time with an edge in her voice, “Just tell me what you think you can see.”

“OK,” I say, and rattle off the letters.

She looks up from her chart with what she believes to be a soothing smile, and says, “It’s all right. Don’t worry about it, the doctor will explain it when you see him.”

My anger rises; this is what happens when you’re old. They talk to you as if you were an uncomprehending child. Remember when your little one fell down and skinned a knee? You held her close, said Mommy will make it better, then kissed the bruise, and asked, “See, isn’t that better now?” The older you get, the more you’re likely to relive that little scenario, only now you’re the one being reassured as if you were the 2-year-old.

Two hours and several tests and X-rays later, I’m ushered into a room again, where I’m told the doctor will be with me shortly. He arrives, goes at once to the computer, and pronounces, “You’ve had a retinal hemorrhage but your eyesight seems to be OK,” and he repeats the 20-60 number his assistant wrote down.

“But everything is blurry,” I say again. “I can’t read ordinary printed text. and even when I enlarge the text on my computer, it’s a struggle to see it. I’m near-blind.”

He tries to be reassuring, but there’s no conviction behind his words. Is it my anxiety or his considered reality? I don’t know. He advises a monthly set of injections that might help clear the blood in my eye faster and that, he hopes will prevent another bleed. I do my first one that afternoon and go home, my mind awhirl as I try to contemplate my future.

I have a Ph.D. in sociology, post-doctoral training in clinical psychology, and a license to practice. I taught for a few years, then -- except for a few relatively brief stints at a couple of universities here and abroad -- I gave up teaching to split my professional time between writing and a psychotherapy practice. My 80th birthday present to myself was to retire from the latter. All that’s left for me is my writing, to which I’ve been connected by my umbilical cord since my first published article in 1968. What will I do with my days if I can’t see well enough to do what makes me feel most alive? How will I live them if I can’t do something useful, something that connects me to the world?

I sit in my living room sipping my evening glass of wine and look out at a sky alight with brilliant color as the sun prepares to sink down behind the Golden Gate. I never cease to appreciate the view -- or my good fortune -- in being able to make this a part of my life. But now, all I can think is, The curtain has come done on your last act. It’s exit time. Don’t wait to get sold to Kansas City, like Joe Montana, the great Forty-Niner quarterback did. Get out while you’re ahead, while those who care about you can remember who you were, not who you became.

These aren’t new thoughts. I’m tired. I hate the diminishment of my body and my mind, and have been thinking about my death – planning it -- for a while. But until now, my work has been enough to keep me alive. What will I live for without it? Yes, there are people I love – family and friends who bring pleasure into my life. But will they hang around when I’m no longer able to do what I do, when a burdensome, needy old woman replaces the independent achieving person I’ve been?

Yet here I am, three months since the onset of an illness that left me with a greatly weakened body, seriously impaired vision, and with little hope that either will get any better. Why haven’t I carried out my exit plan? Because, as I said in my opening words, “There’s nothing like the lived experience to give depth and dimension to what you think you know and feel.”

I’ve spent my adult life courting admiration in the conviction that it’s the key to love. Turns out I had it wrong. It took a few months of this illness to teach me what all the 89 years before could not -- admiration and love are not mutually exclusive. Nor are they so easily separable, as they’ve seemed to me for most of my life. For I’ve been anything but admirable in these last months, yet the love and nurturance keep coming – from family, from friends, from people I’ve known for a long time, from some I’ve only just begun to know.

Is this really new knowledge? Or is it a rationalization born of my sudden vulnerability, of the reality that I need others in ways I haven’t since I was a small child? I don’t know. What I do know is that my feelings about life and death have shifted. No, I haven’t suddenly decided I want to live to 100. I’m not even sure I’m up for another year or two in this state. But in one of those paradoxical moments of life, the fallout from my vision impairment has enabled me to “see” some things more clearly than ever before, and I no longer spend so much of my time wishing I’d die, planning how to make it happen.

True, I’m still somewhat bewildered by both my shifting internal world and the new reality of my external one -- not least the outpouring of affection that has come my way. So there are still times when I ask: What did I do to deserve it? Is it real? Can I trust it? Can it be that people love me, not for what I’ve done in the world -- not even for what I’ve done for them -- but simply because of who I am?

I’m not even sure I know what it means to say “who I am” without thinking of “what I do.” I’ve spent my life “doing.” No, not just “doing,” but “doing well” -- as a student, a wife, a mother, a friend, a professional woman. It’s as if my own personal golden rule has been, Do unto others because that’s the only way they’ll do unto you. And while you’re at it, do it admirably – whether it’s being generous to others or writing books.

As I write those words, I feel somewhat embarrassed that I, who have thought, written and counseled others about such things for so many years, took so long to “get it” for myself. But alongside that discomfort lies a sense of relief. Whew, maybe now I can stop trying so hard to be admirable. It’s tentative. I’m still questioning, still testing, still watching -- waiting for the other shoe to drop. What will it take for you to really believe what you see? I ask myself.

I can’t say for sure. The admiration-love duality is buried very deep. But I learned long ago that there’s a difference between knowing and knowing -- between what the head knows and what the heart accepts as truth. Am I closer than before to the knowledge of the heart, to understanding more deeply than I ever thought possible that I can be both admired and loved – and perhaps more important, that I can be loved even when I can no longer be admirable? You bet I am.

Who ever said we can’t learn new ways of being in old age?