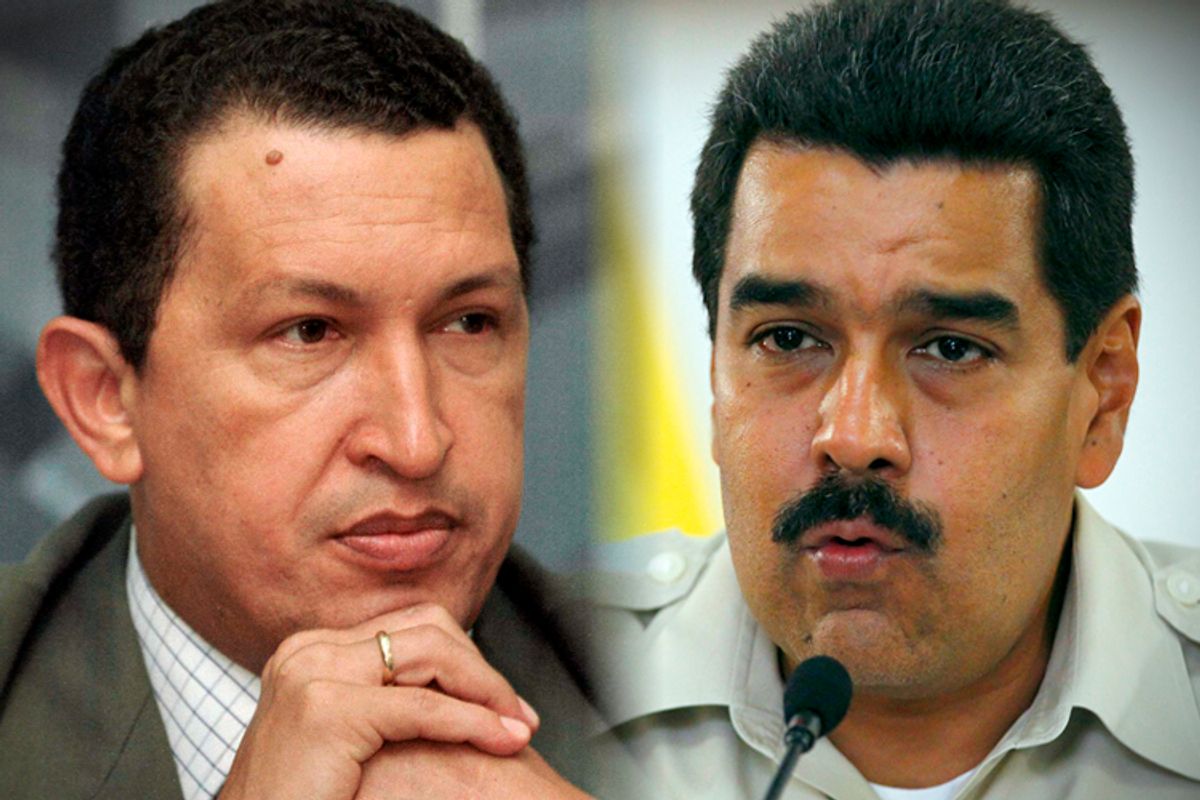 A leader regarded as having robbed the rich to provide for the poor, Hugo Chavez is greatly missed in Venezuela. Not least because the man now charged with continuing his “Bolivarian Revolution,” a politician more in the style of a blustering Friar Tuck than a charismatic Robin Hood, is failing both to entertain and provide for his people.

President Nicolas Maduro scraped into the presidency last month with a margin of just 1.5 percent, an unexpectedly-close result given the candidate’s double-digit polling lead throughout his campaign. Venezuelan popular opinion allotted a 10 percent difference between Chavez and his anointed successor, the firebrand president having defeated the same opponent, the fresh-faced Henrique Capriles, by a more convincing 11 percent margin just five months previously.

“If I win by one vote, I win; if I lose by one vote, I lose,” proclaimed a visibly shaken Maduro in his typically rambling victory speech. Yet Venezuela’s new president has been left without the necessary mandate to foot the bill that Hugo Chavez left without paying.

“It matters a great deal that Maduro isn’t as popular as Chavez,” says David Smilde, a professor of sociology at the University of Georgia. “His near-loss makes chavismo [Chavez's unique brand of socialism] look like it’s based on personal populism rather than solid socialist principles.

“He will struggle to be effective if he cannot win the people’s confidence.”

Hugo Chavez built such a cult following through his larger-than-life populism, that T-shirts with various designs, campaign songs extolling his “heart of the people” virtues and smartphone apps that replay his more comedic outbursts are still regular sights around Caracas. As Venezuela looks back fondly on its deceased president, its new leader, with his attempts to entertain his public with pre-speech bongo drum displays falling flat at campaign rallies, is having a hard time replicating the one-man Chavez Show.

Meanwhile, Venezuela’s problems are worsening. Inflation, at its highest since 2010, is nearing 30 percent. Crime rates, spiraling in the wrong direction, indicate more annual homicides than the U.S. and Europe combined. Shortages of basic goods, the worst since records began, force supermarkets to resort to rationing.

As Venezuelans on both sides of the polarized argument begin to suffer more than ever following Maduro’s now-broken campaign promises to tackle these problems, the new president finds himself losing faith even among his staunchest supporters.

“Maduro isn’t better than Chavez, but we voted for him because it’s what the comandante [or "commander," as Chavez is still fondly called] wanted,” says Sergio Selis, 39, a die-hard chavista [Chavez supporter] and student of Caracas’ National Experimental University of the Armed Forces. “When Chavez spoke about something it became important; you certainly can’t say the same about Maduro.”

The Venezuelan opposition party, along with the U.S. government, is still refusing to recognize Maduro’s election win as legitimate. In response, the National Congress president, Diosdado Cabello, a radical socialist and ex-army lieutenant, has banned anyone that refuses to acknowledge Maduro’s legitimacy from participation in congress.

Effectively silencing all socialist opposition – a faction comprising almost half the seats – Cabello has conferred government decision-making to a new “political-military command,” a shadowy organization that now has free rein over policy. President Maduro, given the cold shoulder by his opposition, and left with little influence within a government leaning toward military rule, is seen as weaker than ever.

In one of its first acts, favoring a military that now holds more sway than ever over policy, the new regime announced Thursday its having spent millions of public dollars to restore the country’s MK2 missile system, a relic of the 1970s. President Maduro has also announced the addition of 3,000 military personnel to the Caracas police force.

“[Cabello] will use the military to force Maduro to behave as they wish, or they’ll stage a coup,” state TV commentator Mario Silva is heard telling a Cuban intelligence officer in a leaked phone recording released by the opposition party last week.

While the government spends money it doesn’t have – national debt has risen 97.5 percent over three years, now at $48.6 billion – many Venezuelans feel Maduro should be concentrating public capital on problems that affect the majority, such as the chronic shortages that clog city streets outside stores after receiving fresh shipments.

“It’s the government’s fault,” says Ricardo Mota, who had waited three hours in the supermarket crush to buy four bags of rice, the maximum permitted due to short supply. “Our government is more interested in seeing that its own needs are met.”

“Chavez’s charisma and popularity allowed him to get away with far more in terms of policy shortcomings,” says Mark Jones, professor of political science at Rice University in Texas. “Many Venezuelans disagreed with Chavez’s policies, but supported him on a more personal level. Maduro gets none of that benefit.”

Unable to pass the buck to a deceased leader on whose legacy he won the presidency, and finding a public increasingly unimpressed by his lacking the populist charm that made Chavez so admired, President Maduro must win the country’s confidence through sound leadership if he is to drive his country forward.

Alasdair Baverstock is a foreign correspondent based in Caracas, Venezuela. His work may be viewed at www.alasdairbaverstock.com.