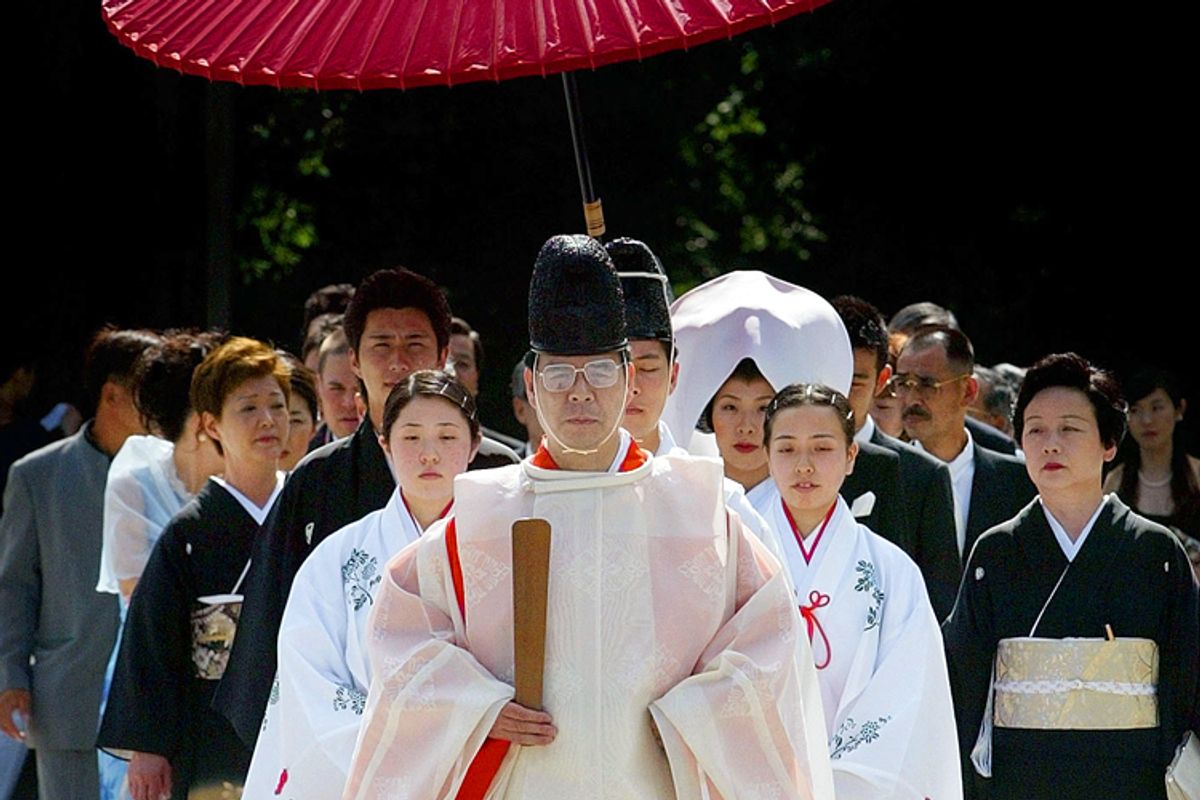 A Shinto priest conducts a wedding at the Meiji shrine in Tokyo. (AP/Junji Kurokawa)
--

Marriage is by nature the mingling not just of two individuals, but two families. In Japan, however, the right for spouses to keep a small but significant portion of their individuality has just been shot down yet again.

On Wednesday, a Tokyo district court ruled against five plaintiffs, aged 36 to 77, who'd sued to keep their original surnames after marriage.

In Japan, married couples must by law assume one partner's family name. Unsurprisingly, in roughly 96 percent of all marriages, it is the wife who changes her nomenclature. (In rare cases, usually when the wife's family has no male heir, a husband may assume the role of mukoyoshi – adopted son --  and take the bride's name to preserve the family lineage.) As the Wall Street Journal explains, the plaintiffs, who had sued for damages from not being able to keep their names, "had argued that the article violates the Japanese constitution’s Article 13, which demands respect for the individual, and Article 24, which stipulates equality between husband and wife."

This isn't the first time the name change rule has been challenged. In 1996, the country's Justice Ministry drafted a proposal to update the law to give both men and women the option of keeping their names after marriage -- even while requiring that any subsequent children have the exact same last name as one parent. The proposal stalled at the gate. And four years ago, a United Nations Convention on the Elimination of All Forms of Discrimination Against Women appealed to Japan to end the restriction. But though the laws have not changed since then, there's been an increasing movement to relax the enforcement of it in the private sector. A Thursday editorial in the Asahi Shimbun notes that "A growing number of workplaces in Japan are adopting the policy of allowing workers to keep using their original family names even after they were legally changed due to marriage."

You'd think that in a modern world of blended families and complex relationships, the argument that it's inherently easier for a woman to be assimilated, name and all, into her husband's clan would be outdated. But in Japan, where certain families can trace their names back over a full millennium, tradition is paramount. And the battle over whether a 21st century woman – one who likely has her own aspirations and accomplishments – gets to keep her given identity now stands directly at odds with generations of ancestral customs.

But perhaps the most striking part of the recent court case – a case that will no doubt be fought again as women continue to make professional and personal gains not just in Japan but throughout the world --  is how few brides would likely exercise the freedom to keep their names even if they had it. Here in the U.S., where we have the freedom to take a man's name, keep a family one, blend it, or come up with something entirely new, only 8 percent of women recently surveyed kept their maiden names after marriage – a mere 4 percent more than those who do in Japan. And a 2009 Indiana University study found that nearly half of Americans believe that women should be required to take their husband's names.

Ultimately, convention and societal mores play an even bigger role in how a woman defines herself after marriage than whatever the law says. The choice of who she is isn't just something that a judge in a courtroom decides. But what makes the Wednesday ruling in Japan dispiriting is that it shuts down the conversation entirely. It says there's no room for even the possibility of doing things differently than they have been for hundreds of years. And it's unfortunate, because whatever name a person goes by after marriage, isn't that signifier all the more meaningful if there's at least the possibility that it was willingly chosen rather than forcefully imposed? It's worth considering. And the thing about traditions is that long ago, they were new and strange ideas too.