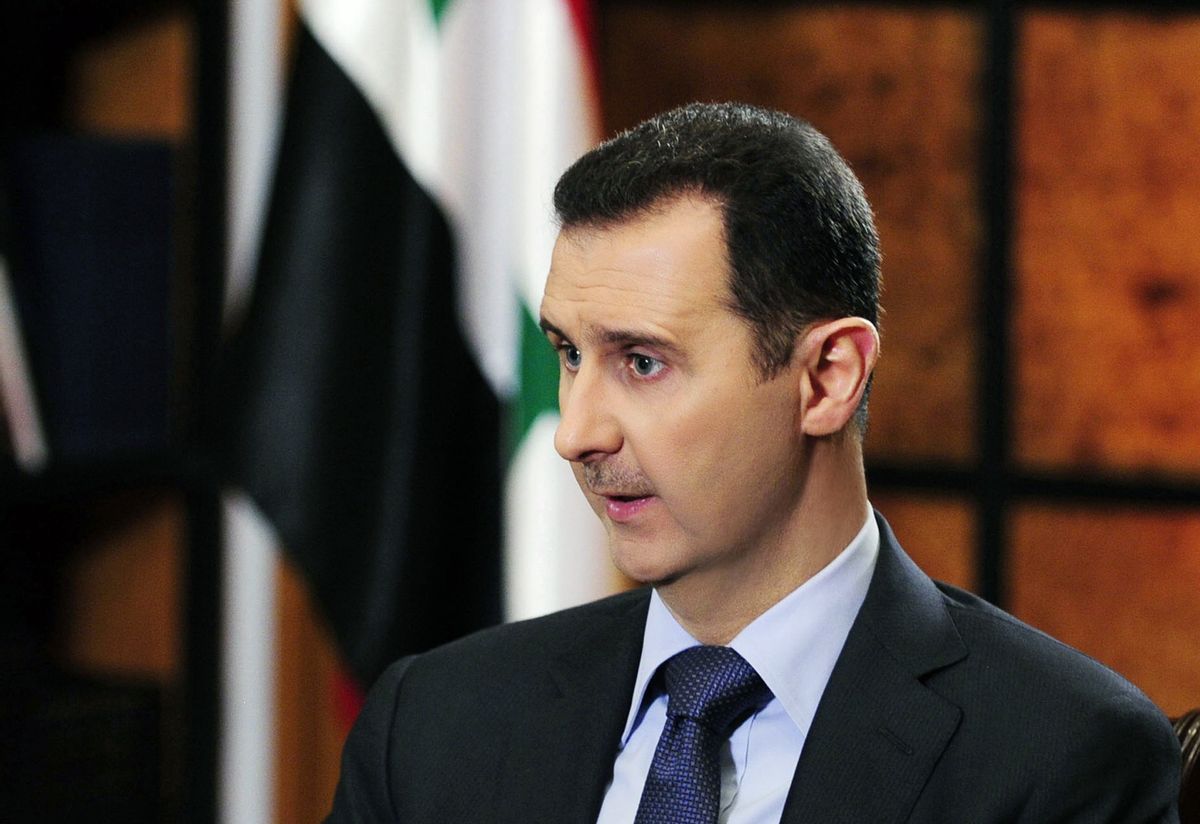 BEIRUT (AP) — The Syrian president has told Lebanon's Hezbollah-owned TV station that Damascus received the first shipment of Russian air defense missiles, according to remarks released by the station Thursday.

Bashar Assad's comment on the arrival of the long-range S-300 air defense missiles in Syria could further ratchet up tensions in the region and further undermine efforts to hold U.N.-sponsored talks with Syria's warring sides.

Israel's defense chief, Moshe Yaalon, said earlier this week that Russia's plan to supply Syria with the weapons is a threat and that Israel was prepared to use force to stop the delivery.

The Al-Manar TV, owned by the Lebanese militant Hezbollah group, released Assad's comment on the Russian missiles through its breaking news service to clients on Thursday morning. An official at the station confirmed to The Associated Press that the remark was from the interview.

The TV is to air the exclusive interview in full later Thursday.

The shipment of the missiles, if confirmed, comes just days after the European Union lifted an arms embargo on Syria, paving way for individual countries of the 27-member bloc to send weapons to rebels fighting to topple Assad's regime.

The developments raise fears of an arms race — not just between Assad's forces and the opposition fighters battling to topple his regime, but also in the wider Middle East.

Israel has carried out several airstrikes in Syria in recent months that are believed to have destroyed weapons shipments bound for Hezbollah, the Lebanese Shiite group that is an Assad ally, along with Iran and Russia. It is not clear whether Israeli warplanes entered Syrian airspace in these attacks.

With the Russian missiles in Syria's possession, the Israeli air force's ability to strike inside the country could be limited since the S-300s would expand Syria's capabilities, allowing it to counter airstrikes launched from foreign airspace as well.

The S-300s have a range of up to 200 kilometers (125 miles) and the capability to track and strike multiple targets simultaneously. Syria already possesses Russian-made air defenses, and Israel is believed to have used long-distance bombs fired from Israeli or Lebanese airspace.

When Israeli warplanes struck near the capital of Damascus, targeting purported Iranian missiles intended for Hezbollah earlier this month, Syria did not respond.

It was the regime's most serious warning to Israel since the beginning of the conflict in March 2011 but it was not clear if there was a link between al-Moallem's remark and the Russian shipment.

Israel has long lobbied Moscow over the planned sale of S-300 air-defense missiles to Syria. However, on Tuesday, Russia's deputy foreign minister, Sergei Ryabkov, said his government remained committed to the deal.

Monday's decision by the EU to lift the arms embargo opened the possibility for individual countries to send weapons to Assad's outgunned opponents, though there was no indication any single European country would send lethal weapons to the rebels anytime soon.

Britain and France, the main military powers in the EU, had pushed for the lifting of the embargo, arguing that Europe's threat of arming the rebels would force Assad to negotiate in good faith.

Russia harshly criticized Europe's decision, saying it undercuts international efforts to bring the opposing sides in Syrian conflict together for a peace conference.

There was no immediate reaction from Israel on the Russian shipment but Silvan Shalom, a Cabinet minister from Prime Minister Benjamin Netanyahu's party, told Israel Radio that the Jewish state will "take actions" to make sure advanced weapons don't reach rogue groups.

Prospects for convening a peace conference on Syria were further thrown in doubt after al-Moallem said Wednesday that Assad intends to remain Syria's president at least until elections in 2014 and might run for another term.

The Syrian foreign minister also said any deal reached in eventual talks with the opposition would have to be put to a referendum, introducing a new condition that could complicate efforts by the U.S. and Russia to bring the two sides together in Geneva, possibly next month.

While Syria has said that it will "in principle" attend the conference, the fractured political opposition has not yet announced whether it will attend or not, despite more than a week of meetings in Turkey to devise a strategy for Geneva talks.

Leading opposition members have said they would only attend the conference if Assad's departure from power tops the agenda, a demand on which sponsors Russia and the U.S. appear to disagree.