"The Killing" returns, better than before

Which is not saying much 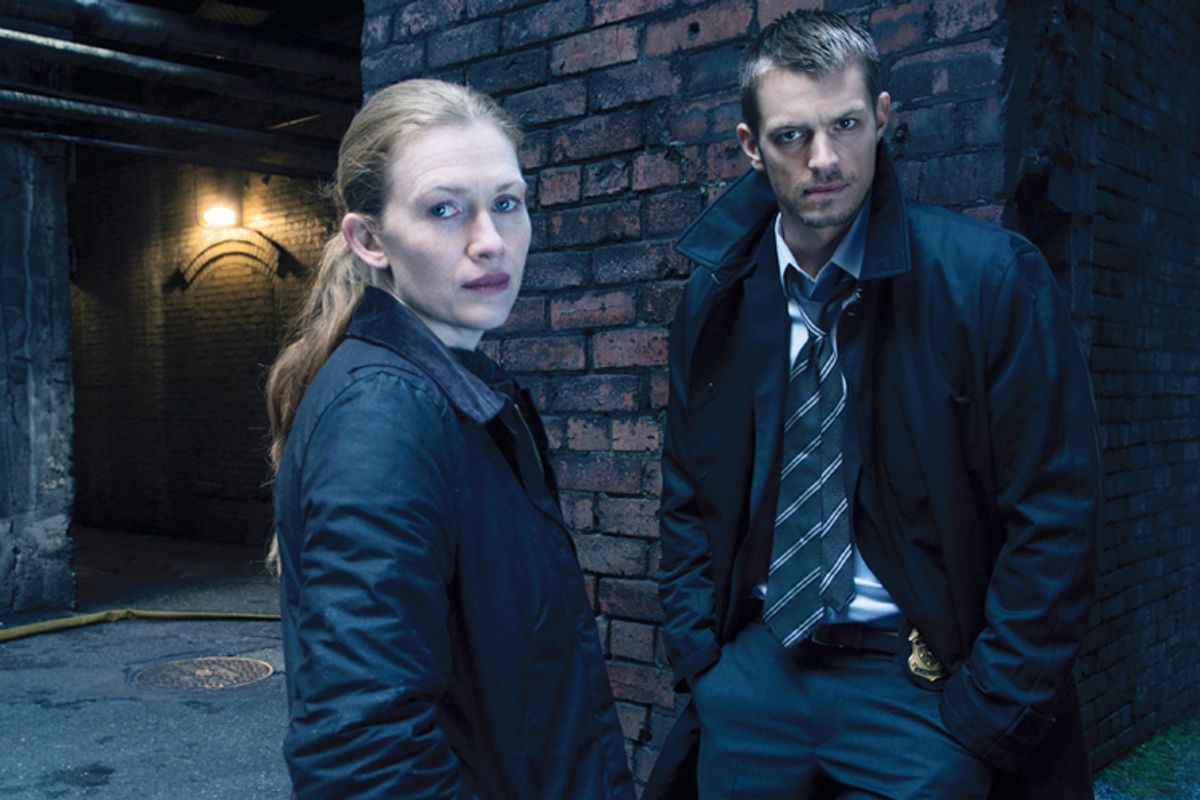 “The Killing” returns from the dead this Sunday night on AMC. The crime show, which infamously ended its first season without revealing who killed Rosie Larsen, was canceled at the end its second season and the resolution of the Larsen murder. (The aunt did it, a factoid that recently came up at a bar, where three out of four people polled failed to remember it.) But then, like one of the zombies on AMC’s “The Walking Dead,” “The Killing” lurched back to life for a third season and a fresh start. Or really a "fresh" start. The new season of "The Killing,” like the old seasons of “The Killing,” contains rain, sweaters, shoddy police work, endless whispering and an unerring instinct for pretentiousness, but at least there’s a whole new case, this one involving a serial killer decapitating and raping street kids. It's an improvement.

What I’m about to say sounds like an insult — is, basically, an insult — but is not just an insult. If the new season of “The Killing” had a motto it would not be, “If it ain’t broke don’t fix it,” it would be “If it is broke, still don’t fix it.” The show’s dedication to not fixing what is broken — creator Veena Sud’s faith that being a bad version of “The Sopranos” is somehow better than being a great version of “CSI” — is remarkable, but, in this new season, also, finally, sort of endearing. No one can say “The Killing” isn’t reliable. You know what you’re going to get. Its formula might not add up to much, but it does add up to something. Even a waterlogged clock with a symbolic nicotine addiction is right twice a day.

The new series picks up about a year after the last left off. Sarah Linden (Mireille Enos) is now working minimum wage doing security for ferries, having lots of sex with a much younger guy, and smiling. Obviously, this cannot stand. When Linden is doing what she loves, she is miserable. Soon, her old partner Holder (Joel Kinnaman), who has spent the last year being a good and healthy cop (his new girlfriend buys him an electric toothbrush), catches a case— a decapitated 14-year-old— that reminds him of one of Linden’s old cases. It just so happens that old case is the exact case that drove Linden crazy many years ago and was mentioned regularly in season 2: It involved a small boy being locked in an apartment with the corpse of his dead mother for six days and then compulsively drawing pictures of a copse of trees. Linden is sucked back in. The smoking starts, the smiling stops, she whips out a really fluffy turtleneck, does some basic due diligence and ta-dah: serial killer.

As sick as I am of serial killers on TV, this is a good choice for "The Killing." It is finally unshackled, plotwise, from the far better Danish version of the show and should be able to pace itself in a more effective and gripping way than it did it the past. It also means the new season does not involve slogging through Seattle politics or being trapped in the claustrophobic Larsen house, but instead features Peter Sarsgaard as a maniac who is, probably, wrongly on death row and four homeless teenagers who encourage Holder to dig deep on his street slang (and unlike their elders seem to know how to use cellphones). Come for Holder’s diet tips, stay to see Linden’s sweaters, and expect them to mess up the case in a million ways before they finally catch the bad guy at great personal psychological expense.

And when things do get pompous, at this point, that feels like an expected part of the experience. Linden goes out for a run and it starts to rain. When she takes shelter in an abandoned stable, I started to laugh: Since when has Linden — a woman who refuses to wear a raincoat or carry an umbrella even though it is always raining — ever, ever, ever taken shelter from some drizzle? The answer is, when she needs to make a metaphor. The stable is full of abandoned and plagued cattle corpses and one sickly, moaning cow. Sarah goes back home, gets her gun, trudges back through the rain, and shoots the cow in the head. See, sometimes doing the right thing means picking up your gun again; or sometimes doing the right things means killing what’s sweet and cow-eyed; or sometimes doing the right thing means going out in the rain; or invent your own meaning for the sad cow because with "The Killing" poking fun is part of the fun.