It wasn’t Jerry Brown’s austerity that led the fiscal comeback. It was the state’s smart, bold progressive movement 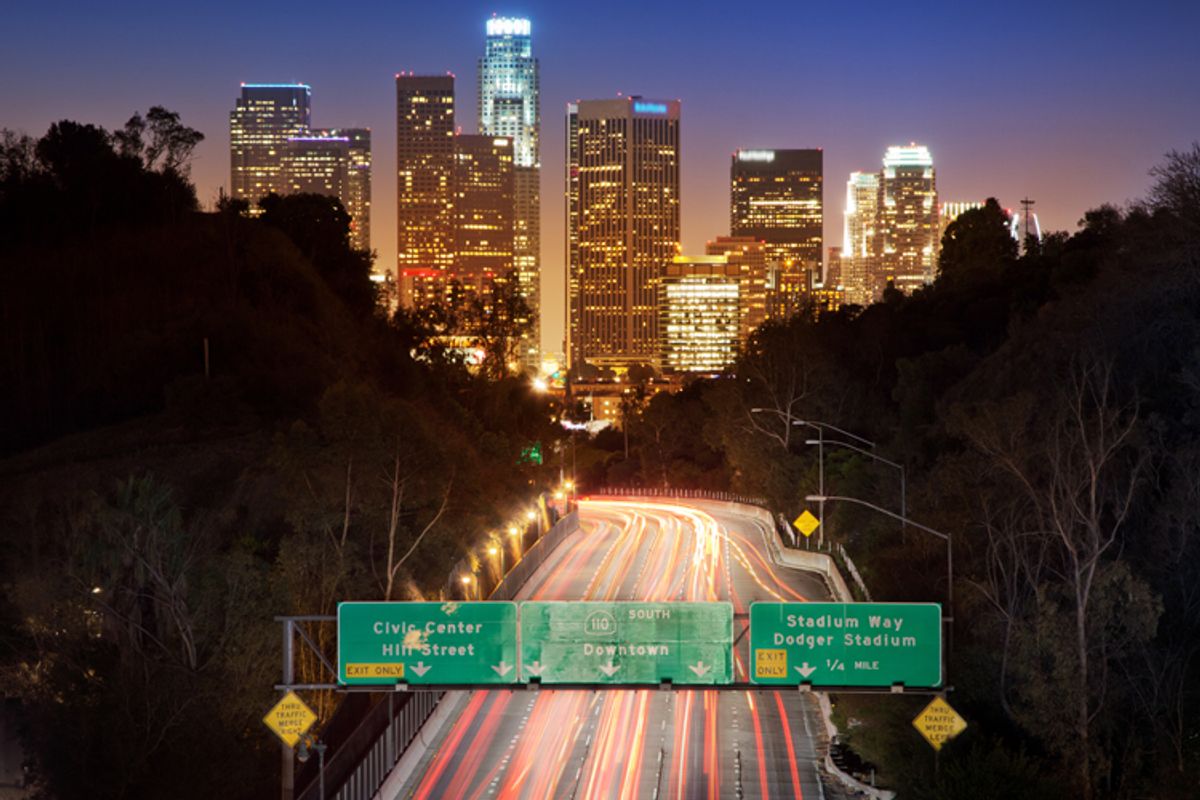 Last week, the Atlantic’s James Fallows penned what has almost become its own genre, a glorifying profile of California Gov. Jerry Brown, positioning him as the savior of the Golden State, single-handedly bringing it back from fiscal collapse. Brown, the story goes, stepped away from his “Governor Moonbeam” past and embraced a new practicality. “I find that a lot of people are more invested in position-taking than they are in the inquiry,” Brown says to Fallows, an expression of his philosophy. “Generally speaking, I am in the inquiry.”

It’s a nice sentiment. It’s also wrong. No politician in California is more invested than Brown in taking a very specific position – demanding restraint in allocating post-recession surpluses to attend to human needs. This pro-austerity pose, a defining characteristic of Brown’s entire political career, now threatens the pace of recovery in the nation’s largest state, the perception of the federal healthcare overhaul, and the lives of hundreds of thousands of Californians.

Contrary to the Great Man theory of politics from Brown’s hagiographers, liberal organizations led California’s comeback, by taking away the tools empowering minority Republicans. The initiative allowing Democrats to approve a budget by majority vote passed in 2010, before Brown’s term began. Online voter registration rules and a massive campaign to engage low-frequency voters led to a sweep of the 2012 elections. Democrats passed a sorely needed tax measure to balance the budget, and attained an overwhelming majority in the Legislature. Success has unsurprisingly flowed from the removal of ideological gridlock.

Brown has appointed himself fiscal watchdog for the state, rejecting the restoration of any social services that were savaged by cuts over the past five years. This would be fully understandable if the money didn’t exist. The lack of a printing press means states can only spend what they have. But thanks to the tax measure and an improving economy, California now has a surplus, which has forced Brown to recalibrate. He didn’t recalibrate his message; he recalibrated the nature of the surplus.

In the May revision of his budget, Brown lowballed the revenue estimates, claiming a modest $1.2 billion surplus that he planned to use to pay down debt and increase a rainy day fund. The nonpartisan Legislative Analyst’s Office, which usually scolds governors for unrealistically optimistic revenue projections, put the surplus at $4.4 billion, nearly three times as high. State media, with its pro-austerity bias, has generally not mentioned that Brown deliberately misstated how much money the state was taking in, to keep his message of fiscal probity on track. If anyone exemplifies rigid position taking amid changing circumstances, it’s Brown.

State Democrats have largely gone along with the stance of fiscal discipline, mindful that some of the revenue could be volatile and ephemeral. But while not asking for the moon, they do want some targeted, limited and smart restorations. Perhaps the most critical is restoring dental care for the 3 million adults currently on Medi-Cal, the state’s Medicaid system.

Like many other states during the Great Recession, California eliminated its adult dental program for Medicaid in 2009, without the Legislature ever voting to cut it (the Medi-Cal reductions came as part of a “trigger,” which got pulled when revenues failed to materialize). In a given year, over 300,000 poor Medi-Cal recipients would have used dental services. Instead, they either go without, letting serious dental problems fester, or they use the emergency room as their dentist, ringing up massive costs in uncompensated care. “People show up to the E.R. for root canals, abscesses, everything,” explained Anthony Wright, the executive director of Health Access California. “It’s far more expensive to the state to have a patient spend two to three days in the hospital than to pay for their checkup.”

The lack of adult dental care has also undermined the state’s healthcare infrastructure. Community health centers that serve Medi-Cal patients have closed down their dental facilities because of the lack of business. “I’ve seen clinics put their dental equipment in plastic, because they can’t make the business model work without Medi-Cal,” Wright said. This impacts access to children, poor seniors and the disabled, all of whom still have Medi-Cal dental benefits, but find it hard to locate a practitioner willing to take their coverage. Children’s dental disease, especially among the poor, is at epidemic levels in the state, according to the U.S. Surgeon General.

This is not a particularly expensive program to restore; somewhere between $75 million and $130 million annually will get you there. Factoring in the savings in uncompensated care, the total cost is much lower. And the public health impact is astonishing. Research shows that chronic dental disease adversely impacts quality of life and makes it hard to secure employment; your smile, after all, is your first impression. Attend any free health clinic around the state and you’ll see most of the treatment going toward dental care. Sen. Rod Wright used a hearing last week to talk about people in his district waiting three days in line in at one of these clinics. “I had three people who were there who got tired of waiting and violated their parole so that they could go back to prison to get tooth and dental care,” Wright said. Similarly, state Senate President Pro Tem Darrell Steinberg’s visit to a free dental fair last year fueled his passion over the issue, which he made a priority.

If this were a case of crazy, big-spending liberals wanting to give away the state’s hard-earned surplus, that would be one thing. But last week, the Senate Budget Committee voted unanimously to restore adult dental care to Medi-Cal, with the entire Republican delegation on the committee agreeing. California has the most polarized legislature in America, and there isn’t a close second. You can count the number of unanimous votes in the state over the last decade on one finger.

In fact, almost everyone in Sacramento wants to restore this cut, from legislative analyst Mac Taylor to dean of the state pundit class George Skelton. “Eliminating dental care was one of the most inhumane cuts made in the depths of the recession,” said Health Access California’s Anthony Wright. “The state has cut $15 billion from health and human services budgets since 2009. This is a fraction of what was cut, and we have an opportunity for a targeted reinvestment to solve this existing and urgent need.”

But Jerry Brown did not include adult dental care in his May revised budget. He insists that the recovery is fragile and can only be navigated by making “difficult decisions.” That means paying down debt, $500 million of which is owed from one area of the budget to another and could easily be doled out more gradually, providing cost-effective relief for millions of constituents.

There’s a pervasive and perverse moralism in Brown’s approach, this idea that citizens must suffer now to avoid suffering later. Brown studied to be a monk before his career in politics, and he’s fond of reciting this bon mot from when he lived in a monastery in Japan in the 1980s: “Desires are endless; I vow to cut them down.” This is a crusade for Brown, an all-consuming zeal for fiscal discipline, even if it is secured on the backs of the poor.

Is it fiscally responsible to turn down free money? Under the Affordable Care Act, 1 million new Californians will qualify for Medi-Cal, paid entirely by the federal government for the first three years, and 90 percent thereafter. Restoring adult dental care would aid these citizens too, at no cost, and expand economic activity in the state. Plus it would eliminate the discovery that a critical facet of Obamacare isn’t as comprehensive as people expected. “When I talk to people about the Affordable Care Act, the first question I get is always, ‘Does this include dental,’” said Anthony Wright. “If we’re trying to create a comprehensive system, a way to get clinics up and running, get dentists invested in the ACA, you have to restore dental care.”

This will resolve itself in the next two weeks. The state Senate and Assembly have their own budget proposals, both using the sunnier revenue projections from the Legislative Analyst’s Office. Each has its own particular set of priorities – the Assembly wants to increase middle-class higher education scholarships and welfare grants, the Senate wants more career tech training for students. Legislators has a deadline of June 15 to pass a budget, or they lose their salaries. Brown has vowed to reduce the overall size of the budget and kill any new program spending. He also has an ace in the hole: a line-item veto, meaning that he could simply blue-pencil out whatever he disfavored after signing the budget.

The fight over restoring Medi-Cal adult dental care, at a mere .1 percent of the total budget, reflects the triumph of Jerry Brown’s pursuit of an “era of limits” over common sense. California has lots of problems, but not many that can be solved this easily, without mortgaging the state’s future or setting it down a slippery slope to runaway overspending. Regardless of his ability to charm reporters by pontificating about Greek literature or theology, Brown’s asceticism is not something to admire without measuring the dramatic real-world effects. A governor truly interested in “inquiry” would endeavor to meet a few poor people with aching teeth, and learn from them about our obligations to each other.