Pick of the week: Inside an "eco-terror" cell

Pick of the week: Rising indie star Brit Marling plays an undercover agent in the anarchist left in "The East" 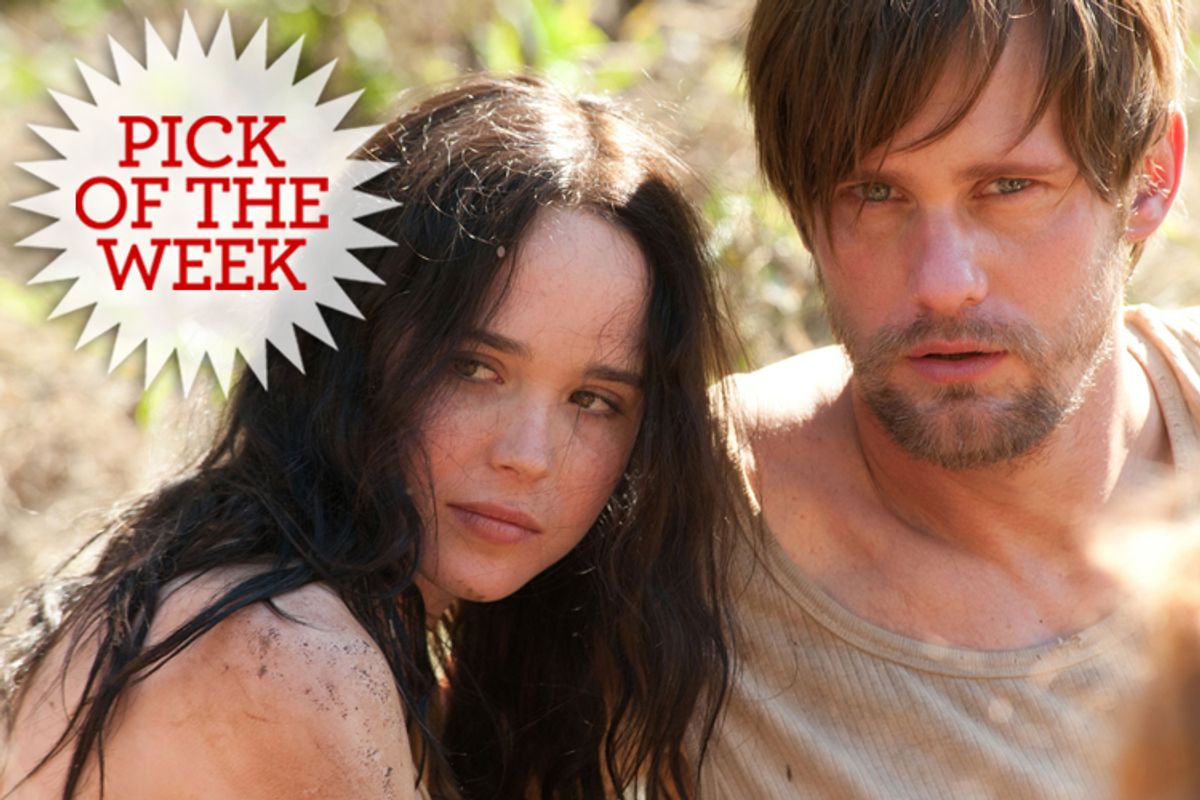 Ellen Page and Alexander Skarsgård in "The East"
--

In the new indie thriller “The East,” Brit Marling – a tall and severe-looking blonde who’s carving out an unconventional career as an actress and screenwriter – plays a secret agent named Jane who is sent undercover into an organization widely seen as a terrorist group. From that familiar genre-movie setup, “The East” pursues its own path: Jane tells her boyfriend that she’s flying from Washington to Dubai, but instead she leaves the airport, changes from business wear into scruffy clothes and makes her way here and there via bicycle and freight train and ride-sharing, eventually landing in a rural commune near Pittsburgh.

“The East,” which is co-written by Marling and director Zal Batmanglij, adroitly suspends judgment both about Jane (who renames herself Sarah) and about the anarchist or “eco-terrorist” collective she penetrates, which is presented neither as a creepazoid cult nor as unambiguously heroic. Ultimately I think the story could do with a clearer and more passionate point of view; it’s as if the icy, rational detachment Marling projects as an actress also defines the worldview defined by the script and Batmanglij’s directorial choices. But at its best “The East” comes close to being the morally murky film about anti-corporate resistance that we (or at least I) have been waiting for.

Jane/Sarah does not work for any government agency, but rather a Blackwater-like private security firm whose mission is defending its clients from hacking, vandalism or espionage that might affect profits or drive down stock prices. As her coolly maternal boss (Patricia Clarkson) reminds her, it isn’t their job to protect anyone who hasn’t paid handsomely for it, and the only reason they ever share intel with the FBI is to limit their exposure to prosecution or lawsuits. So she essentially represents no values whatever, not even right-wing or jingoistic ones, beyond the pure acquisitive hunger of capitalism. When she eventually meets the underground collective who call themselves The East, on the other hand, its members are driven by an almost biblical sense of morality. They invade a CEO’s house and flood it with his own company’s toxic sludge; they dose everyone at a pharmaceutical industry shindig with a lucrative new antibiotic that has alarming side effects.

Ultimately, I guess Marling and Batmanglij want to argue in favor of a middle-ground reformist social policy that’s somewhere in between the absolute nullity of corporate whoredom and eye-for-an-eye vendetta campaigns derived from half-baked philosophy seminars. That’s politically reasonable and all, but it also means that the journey we take during “The East” is a lot more interesting than the destination, and it conveys a false impression of what the film is actually about. Seeking revenge on evil corporations is essentially a metaphor; this movie, like Batmanglij and Marling’s earlier mind-bender “Sound of My Voice,” addresses more mysterious topics like the perversity of group dynamics, the limits of human knowledge and even the nature of religious conversion or awakening.

In “Sound of My Voice,” Marling played a Los Angeles cult leader who claims to be a damaged prophet from the future. (Come to think of it, she’s supposed to be sick because she grew up on the poisoned planet that lies a few generations ahead of us.) A couple who join her group, convinced that she’s a huckster and seeking a journalistic scoop, are swept into a romantic triangle with Marling’s Maggie, who is both seductive and manipulative whether or not she’s a time traveler. In the end, Marling and Batmanglij felt honor-bound to resolve the mystery with a standard science-fiction resolution – or, to be fair, with two competing possible resolutions – when the power of the film lay in its mood of menace and its (sorry!) epistemological uncertainty.

One could say that uncertainty is even more on the surface in “The East,” even if the film’s atmosphere is not quite so claustrophobic. Jane is apparently a Christian conservative who finds herself alternately seduced and repulsed by The East, an Earth Liberation Front-type group that claims to be leaderless but nonetheless clusters around the handsome and charismatic Benji (Alexander Skarsgård). While this is not a perfect portrayal of the anarchist underground, a world I have personally encountered at arm’s length, at least it’s free of the usual clichés and reflects some actual understanding and research. Marling’s best scene comes when Jane pulls a discarded apple out of a trash can in front of the horrified Clarkson and eats it, to demonstrate how The East has forced her out of the Matrix-bubble of consumerism and waste.

A strong ensemble cast is headed by Shiloh Fernandez, Toby Kebbell and Ellen Page, as a relentless little firebrand named Izzy who never hesitates to stand up to Benji and turns out to have her own highly personal agenda. If The East has some off-putting groupy-group rituals – wearing straitjackets to dinner and feeding each other with wooden spoons; playing games of Spin the Bottle that stop just short of group sex – they’re nowhere near being the Manson family. The group’s loyalty and affection for each other are unforced, and while there are certainly potent intra-group dynamics, no one is prevented from leaving. (Indeed, the group periodically disbands and reunites on a voluntary basis, an anarchist nuance I’ve never seen captured in a movie before.) Their corporate targets are carefully chosen, and in the greater moral balance, the group’s crimes are distinctly small potatoes.

Indeed, I would say the central question of “The East,” which is almost but not quite the truly terrific movie that Batmanglij and Marling are going to make one day, is that of how to manage the cognitive dissonance between competing worldviews: the purely instrumental one held by the soulless slaves of our corporate overlords or the (perhaps) overly idealistic one held by the doomed, ragtag forces of resistance. It’s not that the movie fails to take sides, or argues some bogus moral equivalence; Jane/Sarah makes decisions that endanger both her livelihood and her life, and as flawed as Benji may be, he possesses the genuine gift of prophecy (again, like Marling’s character in “Sound of My Voice”). It’s more that the filmmakers close out this oddly inspiring yarn of apocalypse and paranoia with a note of false reassurance. Yes, the world is fundamentally screwed and most people are apathetic or paralyzed. So start ringing doorbells!

“The East” opens this week at the AMC Lincoln Square and Sunshine Cinema in New York and the ArcLight Hollywood and Landmark in Los Angeles. It opens June 7 in Chicago, Dallas, Philadelphia, San Francisco, Santa Barbara, Calif., Toronto and Washington, with wider release to follow.