Class war comes to the multiplex 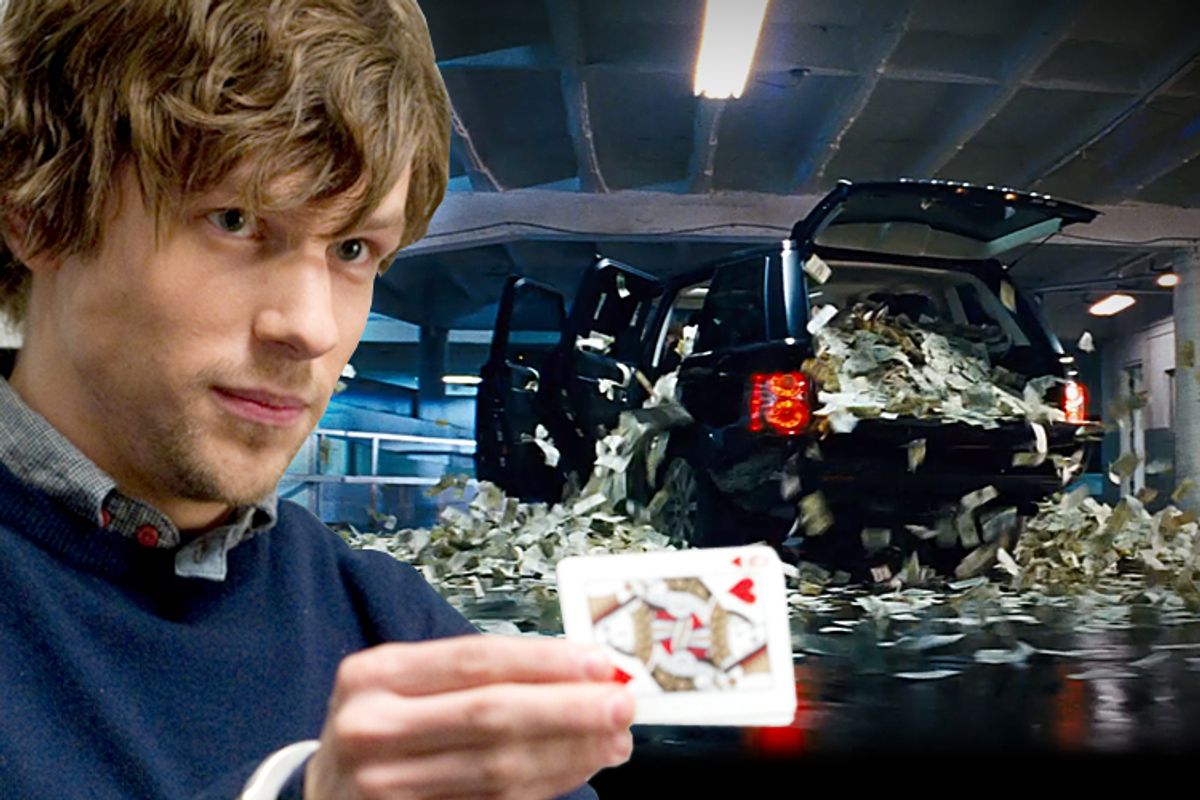 Jesse Eisenberg in "Now You See Me"
--

In the brainless but intermittently entertaining heist movie “Now You See Me,” a quartet of magicians played by Jesse Eisenberg, Woody Harrelson, Isla Fisher and Dave Franco (younger brother of James) pull off an elaborate stunt that appears to violate the laws of physics and numerous other written and unwritten laws as well. After claiming to teleport a French audience member back home with a magical helmet, they then vacuum up millions of euros in cash from the vault of a Parisian bank and shower them, seconds later, upon their Las Vegas audience. Back in the land of escargots, when bank officials open the vault, nothing is left but a playing card signed by the supposed teleportee.

I’m not spoiling much of anything in telling you that the magic trick is an illusion: The money was in Vegas the whole time, and Monsieur le Teleport never went anywhere. Then again, “Now You See Me” is a kind of illusion or inversion as well. For one thing, it’s a fantasy in which tourists depart Las Vegas with more money than they started with. It’s a movie that plays with dangerous notions of class warfare, payback and redistribution of wealth – with the ancient concept, in fact, of Jubilee, a celebration in which slaves and prisoners are set free and debts are forgiven – and then assures us that it was just kidding, and that in America redemption is always an individual matter.

“Now You See Me” is the latest manifestation, and among the strangest, of a long-running symbolic role for Hollywood cinema. It’s the space where the angry and confrontational politics of class conflict – which are almost entirely absent in the realm of, y’know, actual politics – can play out as dream or wish fulfillment, with no real-world consequences. Both American political parties are primarily concerned with how to manage an economy of worsening inequality, and how to manage the costs of worsening environmental degradation. I won't pretend there are no differences between Republicans and Democrats on these issues. Indeed, there is vigorous and heated debate about how best to mitigate and elide these conditions, how to make them, in essence, look less critical than they are. But it has been several decades since the Democrats made any serious effort to speak for the underclass, the disinherited, those beneath the middle of the middle class. Of course the Republicans never did; and neither party has ever behaved as if saving the planet were important.

So the revolutionary or utopian impulse in American life gets thrust into the imagination, into comic books, science fiction novels and the movies. Sometimes the people who make such movies have an overtly left-wing, cultural-criticism orientation. Most obviously I mean the Wachowski siblings, who of course made the “Matrix” trilogy and the underappreciated “Cloud Atlas,” but also wrote and produced the proto-Occupy cult hit “V for Vendetta,” which looks in the rear-view mirror like a key film of the mid-2000s. Sometimes, as with French-born director Louis Leterrier and the writing team behind “Now You See Me,” the whole thing appears mainly cynical or opportunistic. (That may be unfair; the movie stars Harrelson and Mark Ruffalo, who both have left-activist politics.)

And sometimes the agenda involved is more oblique, more “aesthetic,” as seems to be the case with Brit Marling and Zal Batmanglij’s “eco-terrorism” thriller “The East” (also opening this week) and Sofia Coppola’s upcoming “The Bling Ring.” Those two films, in fact, would make an oddly potent double bill. In “The East,” a conservative Christian corporate secret agent begins to go native within an underground anarchist collective as it stages attacks against the leading executives of planet-raping, population-poisoning corporations. While Marling and Batmanglij do pretty well at resisting the most obvious Hollywood-style clichés in depicting the extreme left – and the double agent indeed undergoes a form of religious awakening – they still default in the end to the idea that all politics is personal, and that these activists and/or terrorists are working out unresolved private traumas rather than acting on larger principles. (Mind you, politics is a personal matter, and psychological issues are often relevant, but the equation here is overly literal-minded.)

In “The Bling Ring,” which I honestly feel offers the most radical critique of any of these films, albeit in anti-intellectual and almost inexpressible form, a group of L.A. teenagers burglarize the houses of numerous medium-grade TV personalities, violating the boundary that separates celebrities from regular people to find that it does not even exist. The palace of the gods on Mount Olympus turns out to be a tacky house in Beverly Hills, with the key left under the mat. If these renegades' version of wealth redistribution is primitive and unsystematic, it also illustrates the way our culture has profoundly confused lust, envy, greed and veneration. Instead of buying the same shoes Paris Hilton wears, why not go to her house and take the ones that her size-11 feet have actually sweated in? If they could steal the shoe with Paris’ foot still in it, like a medieval grave robber stealing the bones and vestments of a saint, that might be even better. (Throw in the bizarre but unsurprising fact that in real life Paris Hilton turns out to have no personal boundaries or sense of privacy; the luxurious house seen burglarized in “The Bling Ring” is really hers.)

What distinguishes “Now You See Me” is that beneath its veneer of zero-consequences light entertainment and its ridiculous globetrotting caper plot, it sporadically engages serious and disturbing issues head-on. Mind you, every thriller worth its salt has to stick an evil banker into the story these days, but this one gets pretty specific. Not long after the Paris-to-Vegas heist, the quartet of magicians – dubbed, no kidding, the Four Horsemen – literally shackle an insurance tycoon played by Michael Caine to a New Orleans stage and siphon off his bank balance, a little at a time, into the accounts of audience members who suffered losses during Hurricane Katrina. It’s not easy to make that startling act of redistributive justice seem meaningless, but “Now You See Me” offers one of those film-theory lessons where we learn that form and content are not in fact different things.

Director Leterrier (who made “Clash of the Titans,” the 2008 “Incredible Hulk” and “The Transporter”) relies on whirling, showy, game-show-style cinematography and jokey, presentational acting from his central foursome to undercut any suspicion of serious messaging. Without needlessly giving away the tangled and nonsensical story line -- which involves a secret magical order from ancient Egypt and a nifty final switchback you probably won't see coming -- I can tell you that the Horsemen seek to punish specific people for specific deeds, not to punish a tiny ruling caste of humanity for the rape and pillage it has inflicted on the rest of us. Katrina and the defrauded homeowners of Louisiana, to use the terms of stage magic, are a grand misdirection.

If you choose to view the entertainment industry at all levels and in all its manifestations as a hegemonic apparatus of thought-control and/or sublimation – I apologize for the theoretical jargon; it’s too late to stop now – then every movie I have mentioned and many more besides, from mega-budget spectacle out to the indie fringe, is just a mechanism for deflecting actual political resistance into the symbolic realm. And, hey, having a godlike quartet of prankster-magicians increase my bank balance several times over sounds like a lot more fun than contemplating the impossible or implausible social changes that would be required in order to divert Wall Street’s zillions to better purposes.

But I’d rather skip the Frankfurt School sourpuss act and suggest that even the dopiest movies, when they imagine a magical moment of Jubilee, an upside-down reordering of reality, tap into the longing for justice that is always there in human history, like an underground river that never quite dries up. To quote Marx’s famous remarks on the power of religion, they express “the sigh of the oppressed creature, the heart of a heartless world, and the soul of soulless conditions.” Will that longing be fulfilled one day? I don’t know about that, but in the meantime we can post Facebook photos of ourselves with Paris Hilton’s shit.