Stephin Merritt: "No one ever gets tired of talking about money" 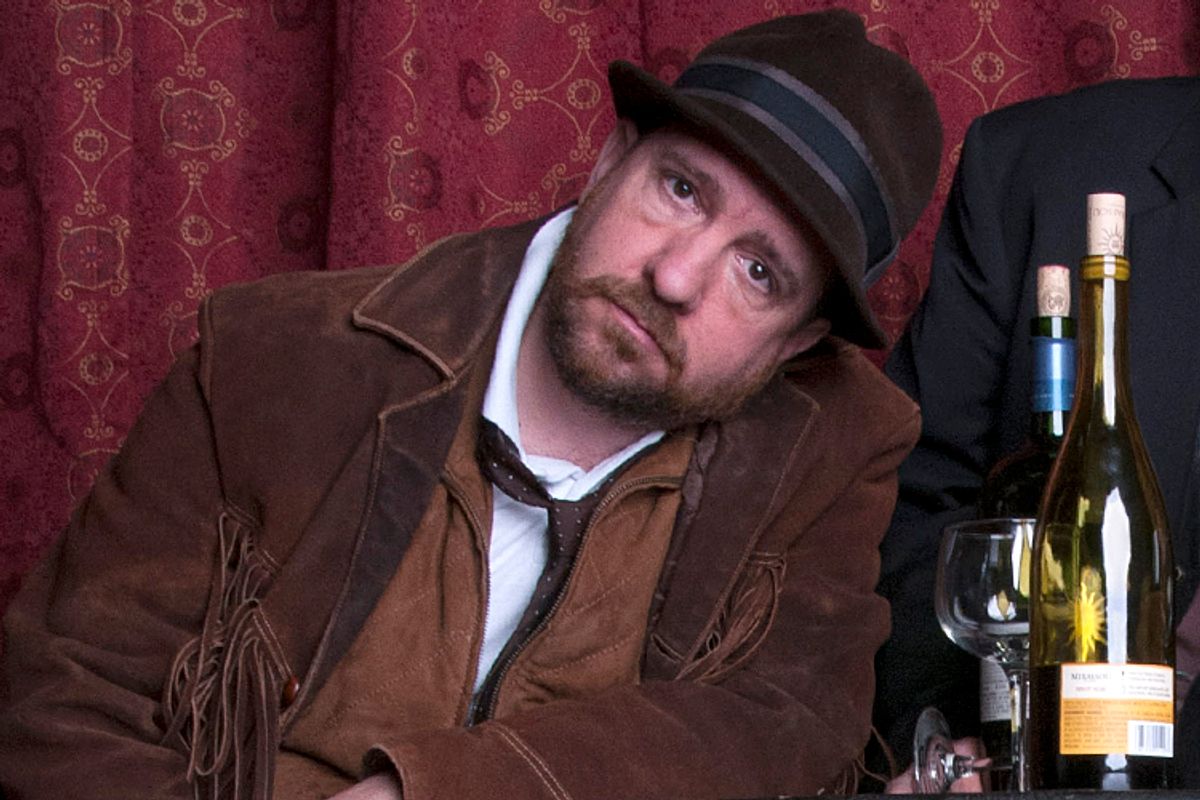 The past few years have been busy for Stephin Merritt. After several years releasing music on Nonesuch Records, Merritt returned to Merge Records, who had released numerous albums from his various projects, including the Magnetic Fields’ landmark "69 Love Songs." 2011 brought a collection of solo material called "Obscurities," while last year saw the release of the latest Magnetic Fields album, "Love at the Bottom of the Sea." This was hailed as a return to the synth-heavy sound for which the group originally earned their reputation, though Merritt was quick to note in interviews that several of that album’s electronic elements (the crackle box, for one) were entirely new to him as a songwriter.

While Merritt’s own projects have earned him accolades, his work is also popular among other artists, as he's widely covered and in demand as a collaborator. One of Superchunk’s signature songs is their cover of the early Magnetic Fields song “100,000 Fireflies"; more recently, Merritt’s work has been covered by artists as wide-ranging as the alt-country artist Kelly Hogan and dance-punks !!!. Merritt has also veered into the literary world, including a musical adaptation of Neil Gaiman’s novel "Coraline," and the Gothic Archies’ 2006 album "The Tragic Treasury," which takes its inspiration from Lemony Snicket’s "A Series of Unfortunate Events." (Snicket’s alter ego, Daniel Handler, has played music in a number of projects with Merritt.)

This year brings the release of a new album from Future Bible Heroes, the trio of Merritt, Claudia Gonson and Christopher Ewen. "Partygoing" features a kilt-wearing man on its cover and abounds with songs that, at least on the surface, seem to nod toward a blissful lifestyle: “Drink Nothing But Champagne” features appearances from a cloned Jesus and an undead Aleister Crowley, each endorsing a certain effervescent alcoholic beverage. The chorus wryly balances sentiments idealistic and bleak; on the one hand, “you’ll never say no to love,” but, the lyrics note, “it makes life shorter than drinking water.”

That balance between gleeful ecstasy and wry mortality is characteristic of the Future Bible Heroes’ sound, where evocations of synth-pop abut grimmer concerns: the party and the existential hangover in one catchy package. "Partygoing" arrives with reissues of Future Bible Heroes’ earlier albums, 1997’s "Memories of Love" and 2002’s "Eternal Youth," along with a collection of EPs and singles, including the bleakly ebullient “Hopeless.”

And while the Future Bible Heroes’ return served as a starting point for this conversation with Merritt, it gradually encompassed numerous facets of his work as a musician and songwriter.

"Partygoing" is the first new Future Bible Heroes album in about a decade. Had you been working on these songs all along, or were they written and recorded in a shorter period of time?

It has taken 10 years, but we weren’t working hard the whole time. I’ve been working hard on it for the last year or two.

Were you working on it at roughly the same time as the most recent Magnetic Fields album?

Did you find that the writing of one was affecting the other in any way?

No. The way that we work in Future Bible Heroes is completely different from the way I work in Magnetic Fields. I never mix the two.

With the current Future Bible Heroes tour, you’re not going on the road with the rest of the group. Does it change your relationship to music you’ve written when you know you’re not going to perform it live?

Well, no, because I always ignore the fact that we’re going to be performing it live anyway. The arrangements that we use on the records are never conducive to being played live. Even in the case of the Magnetic Fields' folk album "Realism," most of the instruments on the album are not the ones that we play live. They are plausible for us to play live, but they are not the ones that we actually do play live.

Is the process of writing music without thinking of how it would be played live similar to the writing you’ve done for theater?

The music that I write for theater is designed to be played live, in a particular theater, with particular people. It’s kind of the opposite of making a pop record, for me.

Do have anything coming up in the theatrical realm?

In terms of the two musicals, are those collaborations, or are you working from existing works?

Both of those are collaborations. But they’re both so early along that I can’t tell you anything about them yet.

Going back to "Partygoing" -- it’s being made available as a stand-alone album, but also as part of a three-albums-plus-EPs set. Looking at the way that the titles of the three albums are organized, I feel like it gives it a very melancholy feeling ...

Was that intentional, to create a work whose title fit thematically with the two albums before it?

Had there always been the intention to use "Partygoing" to bring the other two albums back into print?

Yes; we were thinking of bringing them back into print, and then we thought that we should just wait until we had a new album out. And then we could try to make a bigger bang. There’s a big, enormous bang.

Looking at "Partygoing," there seems to be a theme of luxury that runs through the album: “Drink Nothing But Champagne,” “Love Is a Luxury I Could No Longer Afford.” Was that something that you were pushing the record toward, that sense of ... economics seems too simplistic.

Was I intentionally having the theme of luxury on the album, you mean?

I don’t remember it being particularly intentional, but: sure. Probably. I’m a big fan of the Pet Shop Boys, who no one ever seems to acknowledge, and luxury is one of their major themes as well. I think they’re getting it from Cole Porter. I don’t really remember having luxury be an influence, but I am willing to go with it. Everyone seems to be talking about hardly anything but money recently, so it makes sense to put it on the record. No one ever gets tired of talking about money.

It is a theme that seems to be pretty eternal in music.

Has that had any effect on your songwriting, that change in location?

I only wrote three of the songs on the new Future Bible Heroes while here. I only moved here in September. The album was half-done by then.

When I was watching the video that Merge had put up for "Partygoing," the interview talked about how the collaborative process had been changed by technology -- that it was easier to get music from one member to the other. Did you find that this made collaborating easier, or just different?

Last fall, I was at the event that you took part in for Emma Straub’s book release party, where you were playing songs that you had written for an event at a movie theater in Los Angeles. As someone who’s been following your work for a while, I’m curious -- how do you decide if something will be a song for a project like that versus a Magnetic Fields song?

Well, they asked me to write songs for them as a benefit. The Silent Movie Theatre has an organization called the Cinefamily, a wonderful programming group. I did it as a benefit for them. I was deathly ill that week and had nothing else to do, so I wrote 20 songs on the ukulele -- very short -- having to do with the films I was going to show at 3 in the morning. And because they were showing at 3 in the morning, the theme was “movies you couldn’t possibly fall asleep to.” Typically, they were action-packed. They were very short shorts. And it was very fun.

The question of whether I would turn them into an album didn’t come up; they were so particular to that event.

Do you foresee any recording of those showing up anywhere?

I can always reuse them; I don’t know how I would go about presenting that as something to consume, even for free. “Stephin Merritt writes songs for 20 movies that you’re not seeing.” That would be awkward.

Is it a different experience for you, coming up with a song on your own versus writing a song based on an existing work?

I guess that depends on what the inspiration for it is. "Peach Blossom Fan," the second musical I did with Shi-Zheng Chen, he wanted to use all the character names in Chinese, pronounced with the pitch differences that would be correct in Chinese pronunciation. Which meant that each time you heard a character name, it had to be (here Merritt sings a series of tones). That was the only time that I ever had the inspiration tell me what the melody is. It’s very different depending on what the context is.

In 2008, Guy Maddin interviewed you for Interview magazine. Is there some musician or writer or filmmaker who would be a dream interview for you?

It would have been Guy Maddin, in fact. So that was convenient.

How do you feel, as someone who’s very aware of pop’s history, when you hear another artist covering one of your songs?

I’m always delighted when someone has covered one of my songs. And then I listen for where they got the chords wrong, because they almost always do. It’s always awkward, because I don’t know what are mistakes and what are intentional mistakes. And I kind of feel that way about my own records, when I haven’t heard them in a very long time. I listen to them and think, “Was I intending to sing so flat that it’s actually dissonant? Or was that just a lazy mistake?” “Why is the guitar out of tune? Was that a stylistic choice; I was trying to sound like the Velvet Underground?” Et cetera.

The difference between hearing someone else’s cover and hearing one of my own records that I haven’t heard in a while is not that different. It’s agony in both cases. But in theory, I really love it when someone covers one of my songs.

Do you find yourself going back and revisiting your older recordings that frequently?

Every time we go on tour, I have to listen to, more or less, all the records. And sometimes I listen to them for fun, if I haven’t heard them in a while.

Do you have a sense of when the next time you’ll be going out on tour will be?

In other interviews you’ve done, you’ve spoken of your fondness for experimental music. Is there anything new in that world that you’ve found yourself listening to a lot of lately?

As with popular music, all my favorite experimental music was done 50 years ago. I have just been listening to two compilations of Danish tape music. Which are, I think, called Danish Electronic Tape Music Volume 1 and 2. And I’m also falling madly in love with the Pauline Oliveros 10-record set that came out last year. The great thing about Pauline Oliveros is that she’s doing electronic music live; it’s very important to her that it wasn’t made the way the BBC Radiophonic Workshop would have done it. It’s someone making actual gestures with actual hands. I don’t think you can hear that now, through the cloud of other electronic music that you’ve heard in between. I wish it were on YouTube, that you could see what she was doing.

Are your theater projects your primary focus these days?

Right now, I’m doing a film soundtrack. I’m scoring the new Catherine Deneuve movie. I’m ecstatic about it. If only they would stop re-editing it ...