"The Spy Who Loved": Britain's most glamorous agent 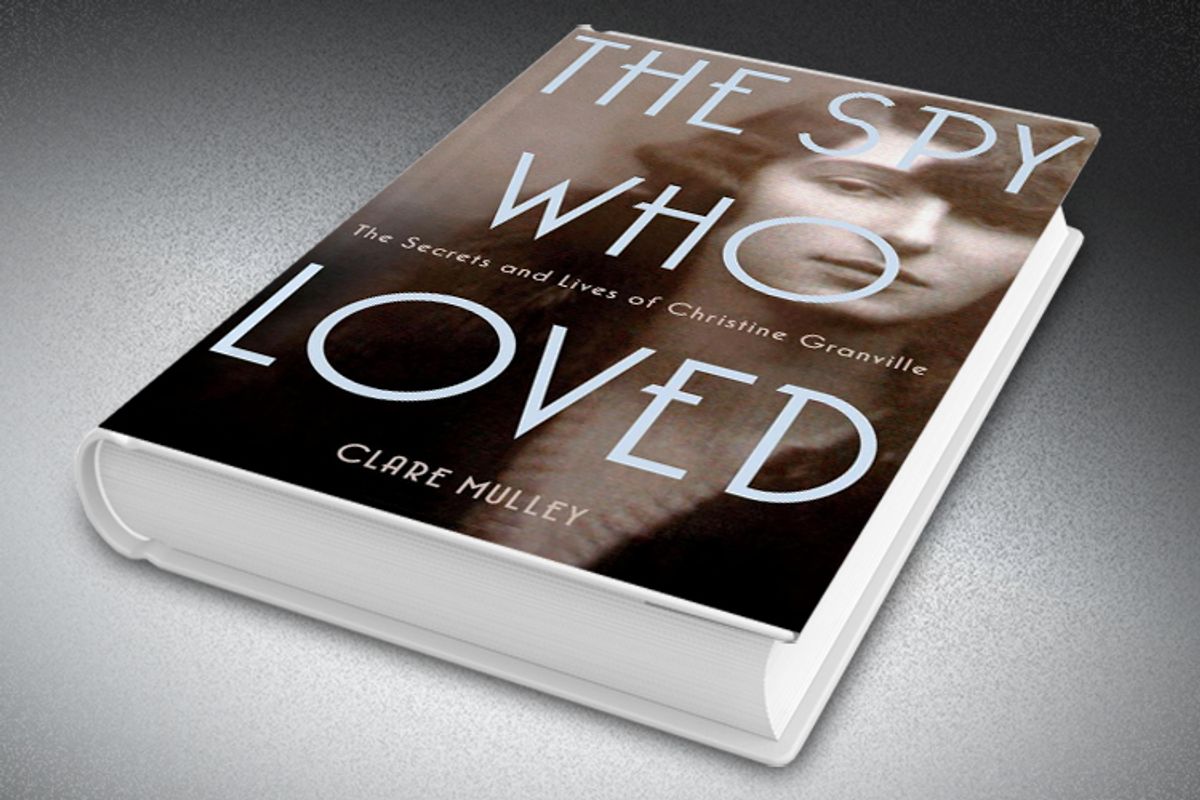 Not long after a woman going by the name of Christine Granville was stabbed to death in the hallway of a London hotel in 1952, five men formed a pact to "protect" her memory. They sought to preserve it from sensational newspaper and book accounts of her life as a hero of the British Special Operations Executive (SOE), an intelligence force deployed against the Nazis during World War II. Most particularly, the pact planned to -- and, for a while, succeeded at -- squelching depictions of Christine Granville as a woman who had had affairs with many men. Ironically, most of the men in the pact were themselves her former lovers, and had at times been rivals for her affection. That even in death she was able to inspire this kind of devotion indicates what an extraordinary woman she was. It also didn't hurt that she had saved most of their lives.

"The Spy Who Loved: The Secrets and Lives of Christine Granville" by Clare Mulley is the most frank and comprehensive tribute yet to Christine -- the name Mulley choose to use for her. She was born Krystyna Skarbek, the daughter of a Polish count and a Jewish banking heiress, in Warsaw in 1908. "Christine Granville" was one of her many alternate names, and one she was proud of, remarking that she'd certainly "earned" it in service of the British war effort. Yet she identified most profoundly as a Polish patriot, and all her life she wore the signet ring of her aristocratic family, whose members include Chopin's earliest patron.

Few lives are as exciting as Christine's. "She loved men and sex, adrenalin and adventure, her family and her country; she loved life and the freedom to live it to the full," Mulley writes. After the Nazis occupied her beloved Poland, she lived in Budapest, skiing over the Tatra mountains to carry information across the border and eventually establishing a route to exfiltrate downed Allied pilots and prisoners of war with her longtime partner Andrzej Kowerski and other agents. Christine's British connections (it's not entirely clear when she started working for them) made the Polish government-in-exile suspicious of her, so despite her commitment to her homeland, Christine was never entirely accepted by them and spent all of the war in the employ of the SOE.

Forced out of Hungary by the advancing Germans, Christine and Kowerski were smuggled across the Yugoslavian border with Christine stashed in the trunk of a car. (The Gestapo had a photograph of her, taken when she was a runner-up in a Polish beauty contest.) From there, they wended their way in an Opel automobile through Axis, Allied and neutral territories to Cairo, but not before handing over microfilm that proved decisive in convincing the British of Hitler's plans to attack his Soviet allies.

Due to competing interests among the Polish government-in-exile, Christine and Kowerski ended up cooling their heels in Egypt for while, suspected by some of being double agents. Cairo was a plush, even giddy station, replete with "swashbuckling" officers, sophisticated Eastern European refugees and nightclubs, a scene remembered by one woman as "a bureau of sexual exchange" and condemned by the new head of the SOE as "a den of iniquity." Christine loved the sunbathing and the intrigues, but hungered for action. Agonizing news of atrocities back in Poland (where her mother, who refused to leave Warsaw, still lived) made her impatient to return to active duty.

After much machination and the intervention of influential friends, Christine was finally parachuted into France, where she teamed up with Francis Cammaerts, a British-Belgian conscientious objector turned resistance leader who would become another of her lovers. This is the standout section of Mulley's book -- full of midnight air drops, desperate gambits, sabotage and hair's-breadth escapes, as well as the valiant, heart-rending battle between the Maquis du Vercors resistance fighters and the Wehrmacht over the Vercors Plateau in 1944, a clash in which Christine and Cammaerts participated.

They were then sent to the Alps near the Italian border to support Allied special forces and partisans and to persuade Poles who had been forcibly conscripted into the German army to defect. On one occasion, Christine was said to have been stopped by Italian soldiers and made her escape by holding up two live grenades and threatening to blow them all up if she were not permitted to leave. (Mulley has some doubts about this story.) There is, however, no question that, using her legendary powers of persuasion, Christine convinced an entire frontier garrison, largely staffed by Polish conscripts, to surrender without a fight.

But perhaps Christine's most daring exploit came about when she learned that Cammaerts and two other comrades had been arrested by the Gestapo and imprisoned at Digne in southern France. Determined to save them from certain execution, she marched into Gestapo headquarters. Using a combination of bribes and threats of repercussions once the area was recaptured by the Allies, she convinced a Belgian collaborator to arrange their release less than an hour before the men were scheduled to be shot.

"It was exactly the kind of situation in which Christine naturally flourished," Mulley writes, requiring nerves of steel and uncanny eloquence. Although Christine was perfectly capable of melting unobtrusively into the wallpaper (always a handy talent in a spy), she also possessed what one friend described as a "mesmeric power of 'switching on' her personality." A pretty, but not classically beautiful woman, she could apparently fascinate almost any man (and quite a few women) with what admirer after admirer characterizes as her "magnetism." This spell even worked on canines -- there were several incidents in which she charmed Nazi guard dogs away from their keepers. Clearly this charisma was more than skin-deep or merely sensual. The many men in her life seem to have loved and admired her for who she truly was: "brave as a lion," as one put it, and "a completely independent human being, answerable to nobody," in Cammaerts' words. None of them seemed to begrudge her her wandering eye.

Or perhaps she was just extremely wise in choosing whom to fascinate. At loose ends amid the routine of the postwar years, unable to return to Poland (which had been delivered up to the Soviets), unsuited to civilian work and regarded as rather alarming by the staid British among whom she'd tried to settle, Christine struggled to find a place for herself. (Mulley notes that many of her equally intrepid male colleagues somehow managed to be accommodated with jobs in the postwar administration.) She worked as a hat-check girl, a switchboard operator and waitress, until signing on as a steward on a passenger liner. On her particularly grim maiden voyage, during which she was ostracized by the rest of the crew, Christine struck up a friendship (and probably more) with a fellow steward who then became obsessed with her. This was one man who could not accept Christine's restlessness. He stalked and eventually murdered her. The woman who had managed to elude the Gestapo for years was destroyed by an ordinary bloke who'd never even seen active duty.

Intensely charismatic people often seem fundamentally unknowable, and Christine is no exception. Myth naturally accrues to any figure so dashing and tragic, such as the story that Ian Fleming's character Vesper Lynd was based on Christine, a notion Mulley discounts. Christine herself liked to spin yarns about her own past, talking casually about her preference for grenades over guns and claiming that the commando knife she numbered among her few possessions had been used to kill more than one man. Yet she kept few records and Mulley was only able to find 11 letters in Christine's own hand, so accounts of these events in Christine's own voice are necessarily missing from this book.

Fortunately, much has been written about British espionage efforts during the war, and much of that by the actual participants, people who knew and worked with Christine. Mulley has also mined the National Archive for an impressive array of primary sources, and there are even still a few living souls who knew her. "The Spy Who Loved" is likely as substantial a biography as can be written about the woman who began life as Krystyna Skarbek -- and it is indeed a thrilling account -- yet she's always slipping out of its reach. That, probably, is just how Christine would have wanted it.